The Government Wants to Teach Students How to Treat Gunshot Wounds. That Could Save Lives, Experts Say

The Department of Homeland Security (DHS) is offering a new $1.8 million grant for a program teaching high school students “mass casualty survival techniques” in the event of school shootings, expanding a training that some medical experts say should be “as common as CPR.”

“Similar to how students learn health education and driver’s education, they must learn proper bleeding control techniques using commonly available materials; including how to use their hands, dressings and tourniquets,” the Department of Homeland Security said in an appendix to the grant announcement, specifically citing the frequency of school shootings. “Victims can quickly die from uncontrolled bleeding within five to 10 minutes; however, anyone at the scene can act as immediate responder and save lives if they know what to do.”

The grant opportunity was originally posted in July and was first reported by the Young Turks on Monday. School districts, nonprofits and other eligible groups have until Aug. 27 to apply for the grant. It could take about 36 months for the programs to be developed, the New York Times reported.

The training program is an example of the kind of safety measures that have been instituted in the wake of several deadly school shootings this year. In two of the worst incidents, 17 people were killed in the February shooting at Parkland’s Marjory Stoneman Douglas High Schools, and 10 more were killed in a shooting at a Sante Fe, Texas high school in May.

As the school year begins, many students are returning to campuses with new metal detectors, surveillance cameras, as well as more armed officers and teachers. And some medical experts say trauma training, like the kind that will be funded by the DHS grant, should be expanded more broadly — and should have been a priority well before school shootings became a more common threat.

“This is something that everyone should know how to do — not just because of a mass shooting event,” said Dr. Eileen Bulger, chair of the American College of Surgeons Committee on Trauma.

She noted that in many states, CPR training is a high school graduation requirement. “This should be as common as CPR,” she said of programs such as Stop the Bleed, which was created in the wake of the 2012 Sandy Hook Elementary School shooting and aims to teach the general public how to use proper bleeding control techniques.

“While it sounds alarming, it really shouldn’t be alarming,” Bulger said. “Think of all the other things we train kids for — fire drills and earthquake drills. Kids need to know what to do in those situations, and if they do, they’re going to be much calmer and much safer.”

Stop the Bleed, which partners with the American College of Surgeons, identifies uncontrolled bleeding as “the number one cause of preventable death from trauma.” The program teaches people how to identify life-threatening bleeding, apply pressure to the wound and use a tourniquet if available.

“There’s no question that the ability to control bleeding at the scene of an event can really make a life or death difference,” Bulger said. “If there isn’t somebody at the scene who can put pressure on the wound or apply a tourniquet if it’s appropriate, they won’t even get to me for treatment.”

But some gun control advocates worry that training students on responding to gun violence is not enough of a solution, and they have called on the Trump Administration to pursue measures that prevent shootings in the first place. Education Secretary Betsy DeVos is in charge of the Federal Commission on School Safety — established after the deadly Parkland shooting “to address school safety and the culture of violence.” But she has said the group won’t look into the role of guns in school shootings.

“In the Army, I was trained to triage injuries and control severe bleeding. As a veteran now, I see no reason our children should endure the type of trauma training we provide our military,” Lindsey Donovan — a member of the Everytown Veterans Advisory Council, which advocates for gun control laws — said in a statement Tuesday. “If this is the Trump administration’s only solution to gun violence in schools, we have already failed. We don’t need to control the bleeding — we need stronger gun laws that are proven to reduce school shootings and save our children’s lives.” 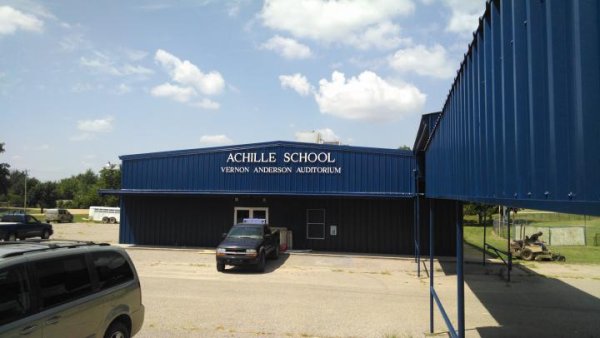 Oklahoma School Shuts Down for 2 Days After Parents Threaten Transgender 7th Grader on Facebook
Next Up: Editor's Pick