Ryan Reynolds — Deadpool star, father of two, husband to Blake Lively, Twitter celebrity — is also a spirits entrepreneur. So on a visit to the Tonight Show Starring Jimmy Fallon this week, host Fallon challenged Reynolds to a game of “Drinko” involving Aviation American Gin, the brand that Reynolds owns.

The two men dropped a disc through a maze-board to determine which mixer they would pair with the alcohol for their unique cocktail experience. Reynolds was initially apprehensive, warning Fallon he had “such a weak stomach, I’m not kidding.” Reynolds initially lucked out — Twinkies and grape soda aren’t such bad-sounding complements to gin, even if it’s not your usual pairing.

“It’s like 90% of my child’s diet, please,” Reynolds insisted about his first beverage, although he was less than enthused about the appearance of the liquefied Twinkies. And apparently the flavor wasn’t that tasty, as he insisted he would “rather drink spinal fluid than that.”

Things went downhill from there, as Fallon was required to ingest a combination of Twinkies and horseradish with his gin, a mix that he was not able to keep down.

But for the final round, Reynolds threw the premise of the game out the window, instead trying his own hand at mixology with the odd ingredients. Bone broth, “blood,” grape juice and liquefied bacon, egg and cheese all came together for his final cocktail, washed down with a healthy pour of gin, straight to the mouth.

As Fallon said, “This guy knows how to party.”

Watch Ryan Reynolds on Jimmy Fallon in the video below. 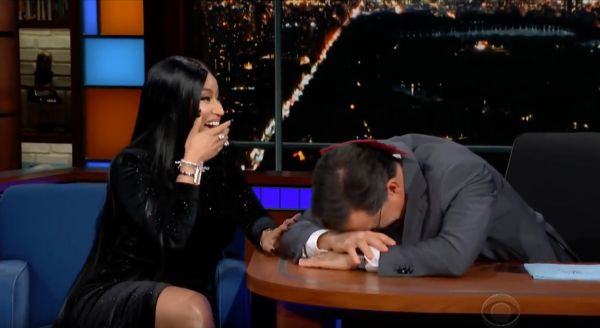