During an appearance on Watch What Happens Live with Andy Cohen, fellow TV host Stephen Colbert was subjected to the hot seat to answer some of Cohen’s burning questions — helped out by a cartoon bear. Cohen got right into the serious stuff, getting Colbert to address his controversial decision to bring out former White House Press Secretary Sean Spicer during the Emmys in September 2017 when Colbert was a host for the awards show.

“Be honest. Do you regret bringing Sean Spicer out for a surprise cameo when you hosted the Emmys?” the “Shady Col-Bear” asked Colbert.

But Colbert had an immediate response. “Not at all. I had no fear that it would redeem him,” he insisted.

“And did you expect the flack that you got? People said you normalized him,” Cohen pushed back. (Spicer and Colbert both came in for their fair share of backlash after the appearance.)

“I knew there would be some people who wouldn’t like it,” Colbert explained. “The funny thing was that right before I brought him out, I looked around the room and I thought to myself, there’s not one joke I’ve told tonight to this room full of liberals that was a risk, other than the one I’m about to do, and it was the joke I most wanted to do.”

This year’s Emmys, which will take place on Sept. 17 in Los Angeles, are being hosted by Saturday Night Live actors Colin Jost and Michael Che. 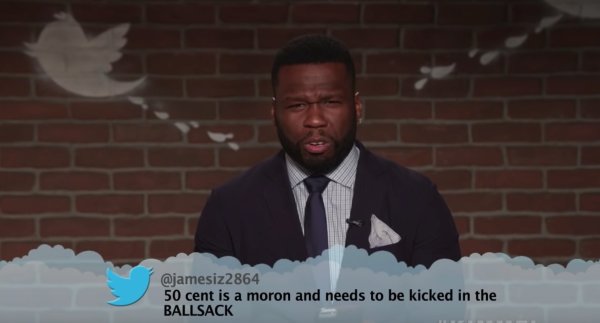 50 Cent's Response to a Mean Tweet on Jimmy Kimmel Is Artful
Next Up: Editor's Pick