The Democratic National Committee’s vote to ban contributions from fossil fuel companies in June was a big win for progressive activists fighting for an aggressive stance on global warming. It took only two months for the party to backtrack.

Last week, Tom Perez, the party’s top official, pushed through a measure undoing the commitment at the request of organized labor, whose leaders fear that some climate change measures could come at the cost of good-paying jobs. “After hearing concerns from Labor that this was an attack on workers, this resolution acknowledges the generous contributions of workers,” the DNC said in a statement, “including those in energy, who organize and donate to Democratic candidates.”

The fault line between labor and climate change advocates is not new, but the divisions seem increasingly likely to precipitate a reckoning as activists push to make climate change a top-tier campaign issue. The progressive wing of the Democratic Party has increasingly embraced a speedy transition to 100% renewable energy while labor groups remain concerned about the potential fallout for workers in the business of extracting and selling fossil fuels if the shift isn’t completed with care.

At the heart of the conflict are the two million plus jobs in the oil, gas and coal industries that could disappear as the world moves to clean energy sources. Many of those positions pay six-figure salaries and offer benefits that exceed comparable positions in other fields. Climate change activists and sympathetic labor groups insist that the move away from fossil fuels will be a “just transition” that ensures opportunities like job retraining for workers, but many in labor remain hesitant.

“There is general agreement between labor and the environmental movement that we do need to have a just transition,” says Jon Barton, deputy director at Service Employees International Union. “But how does that really happen? How do we make just transition real?”

Supporters of a quick move away from fossil fuels to renewables point to the rapidly expanding clean energy economy as a sector where job growth could provide opportunties for displaced oil and gas workers. Nearly 500,000 people work in solar, wind and related industries, a rapid rise from just a decade ago, according to a 2017 report from the Department of Energy. Many of those jobs rely on some of the same skill sets that previously served fossil fuel employment, making a transition easy in theory.

But many clean energy jobs are non-union and lack the benefits paid to union workers. Moreover, some of the most prominent companies in the clean energy and technology space have sought squash organizing activity. Tesla, for instance, has been subject to reports of poor working conditions and accusations that it has tried to keep workers out of unions. “One of the smartest things that the renewable energy industry could do is unionize its workers,” says R.L. Miller, political director of Climate Hawks Vote, a Democratic group that advocates for aggressive climate change policies.

More broadly, the most alarming warning for fossil fuel workers may be the fate of the coal industry and its employees. Around 50,000 coal miners currently work in the U.S., down from 250,000 in the 1970s. Much of that loss can be attributed to mechanization and the rise of natural gas as the country’s leading power source, but Obama-era climate change policies were also designed to hasten its decline. That transition has left coal communities grasping for what comes next with little government support to get there in most cases.

Nonetheless, labor groups by and large support addressing climate change despite the concerns, an evolution from labor’s deep skepticism of global warming policies years ago. The SEIU endorsed environmental justice, a term that refers to addressing the slew of environmental health issues that disproportionately afflict low-income and minority communities, as a key plank in its platform ahead of the 2016 election. Last year, the AFL-CIO resolved to support the Paris Agreement and declared its support for various policies targeting climate change including renewables and carbon capture. And several labor groups have taken a prominent role organizing a national rally next month — called Rise for Climate, Jobs and Justice — designed to bring attention to climate change ahead of the midterm elections.

The move in that direction comes in part because the effects of climate change will hit people in labor, just like they will harm any other human on this planet. Labor groups also hope to shape policy by joining in the conversation about global warming so they can ensure that climate change policy keeps the concerns of labor in mind. “Their future self interest lies in getting on board,” says Guy Ryder, Director-General of the International Labour Organization, a United Nations agency that deals with labor issues. “There are no jobs on a dead planet.”

The real test though will come when concrete policy questions are on the table. In the past, issues like the Keystone XL pipeline drew sharp divisions, and that disagreement could grow as policies increase in significance. Some of the more moderate climate change policy solutions, like a carbon tax that gives the revenue back to taxpayers in the form of a tax cut, are unlikely to win labor support. (A more progressive carbon tax that uses tax revenue to fund job retraining and other economic development enjoys widespread support across the Democratic base including labor). Meanwhile, some of labor groups’ favored measures like carbon capture and sequestration, which would give a lifeline to the fossil fuel industry while cutting carbon emissions, are the subject of scorn in some the most progressive environmental circles.

In the meantime, Democrats should expect more infighting over the issue. The Sunrise Movement — a group of young people pushing aggressive action on climate change — has endorsed candidates like self-described democratic socialist Alexandria Ocasio-Cortez and New York gubernatorial challenger Cynthia Nixon, and this week is leading a grassroots effort to push potential 2020 presidential candidates to pledge to reject fossil fuel donations. And Miller says that her group will try to push the DNC to reconsider its position at its summer meeting in Chicago later this month. “These are solid blue collar jobs,” says Miller. “But at the same time the climate crisis requires a reckoning.” 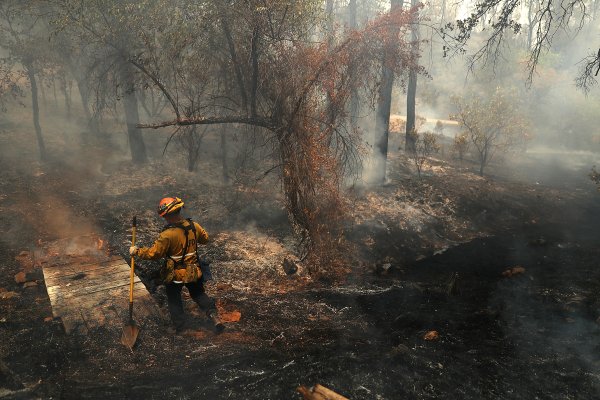 California Wildfires Are Causing Billions in Damage. Who Will Pay?
Next Up: Editor's Pick