Astroturfing is not the latest teen craze, John Oliver explained on Sunday night’s episode of Last Week Tonight. While it sounds like something teens would do once they moved on from eating Tide Pods, astroturfing is when corporations or organization try to make it seem as though whatever they are selling is part of a grassroots movement. For example when a seeming small group calling themselves Americans Against Food Taxes run a national ad campaign against a potential beverage tax. It’s not paid for by a small grassroots movement of concerned citizens, but a large beverage conglomerate lobbying against a soda tax that could cut into their profits.

According to Oliver, in the wake of U.S. Supreme Court decisions like Citizens United, astroturfing is becoming increasing common. Like a national wetlands organization funded by real estate developers and oil companies and a seeming restaurant worker group campaigning against minimum wage increase. “It’s pure straight up opposite world,” said Oliver. “It’s like if this show was called Funnytime Happy Hour with Chuckle-Hunk John Oliver. It’s just demonstrably false.”

Some astroturfing experts work with many special interest groups, creating nonprofit shell companies of sorts to ensure that their ties to the fake grassroots campaigns can be kept secret. “Astroturfing is more than just funneling money through nonprofit front groups,” explains Oliver, before laying out how these groups find so-called experts to swear by questionable findings, occasionally making up facts to support their cases.

Per Oliver, though, one of “the most infuriating tools” of astroturfing is the use of paid protestors. These paid protestors show up at places like town hall meetings masquerading as concerned citizens and reciting lines fed to them by special interest groups. “ According to Oliver, the existence of these paid protestors is now a common theme on conspiracy message boards, feeding into the notion of crisis actors and the like. “That is hugely dangerous,” said Oliver. “The outcome of this cannot be that everyone assumes that anyone who doesn’t agree with them is astroturf.”

To fight fake fire with fake fire, Oliver put together an ad claiming that astroturfers are responsible for shark attacks, the death of bees, puppies, and even babies — or not. 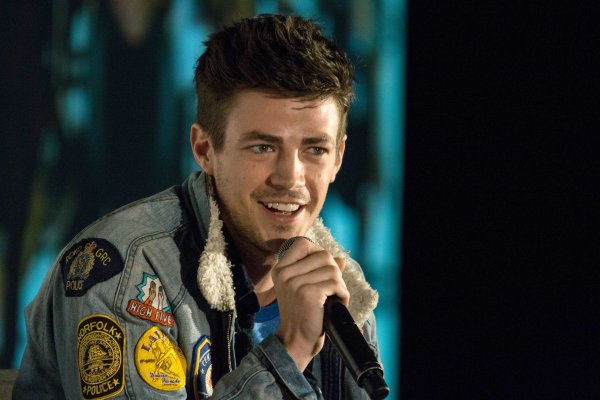 Grant Gustin Hits Back at Body Shamers After Leaked Photo of The Flash Costume
Next Up: Editor's Pick