At Least 72 People Got Sick After Swimming at a Minnesota Campground, Officials Say

A Minnesota campground seems to be behind an apparent outbreak of water-borne parasitic illness, public health officials said.

Minnesota Department of Health (MDH) officials confirmed last week that three people tested positive for cryptosporidiosis after visiting Shades of Sherwood Campground in Zumbrota. (One person also tested positive for E. coli.) In an update posted Friday, MDH officials said they have identified 72 people with symptoms consistent with cryptosporidiosis or E. coli, though most of these illnesses have not been laboratory-confirmed.

Cryptosporidiosis is typically contracted after ingesting water that has been contaminated by Cryptosporidium, a parasite that often ends up in recreational waters via fecal matter, according to the Centers for Disease Control and Prevention (CDC). Symptoms such as watery diarrhea, stomach cramps, nausea, fever and vomiting typically last one to two weeks, though the disease can become serious or fatal for those with compromised immune systems, the CDC says.

Shades of Sherwood temporarily closed and hyper-chlorinated its swimming pool to rid it of possible Cryptosporidium contamination, and has indefinitely closed its man-made swimming pond since it is more difficult to chemically treat, according to MDH. The campground also posted signs warning visitors not to swim if they have recently had diarrheal illnesses.

A representative from Shades of Sherwood said the campground is cooperating with public health officials, but noted that there’s not definitive proof that illnesses originated at the facility, or that they are cryptosporidiosis.

“The MDH has increased their numbers to 72 people based off of phone conversations they had with individuals who
claimed to be sick and also had stayed at our campground. To be clear, the symptoms of cryptosporidium are very similar to other things such as the flu, food poisoning, and dehydration. This is one reason we are concerned with MDH using the number of 72 without having any more confirmed cases than they started with over a month ago,” the representative wrote in an email to TIME. “Obviously the safety and health of our guests is our primary concern. We have had thousands of people who have came through our facility during this time with no reports of being sick.”

“We cannot say for certain what the original source of contamination may have been, but we have evidence that ill people were swimming in the facility’s various water features while still shedding the pathogens and reintroducing them into the features over time,” MDH Infectious Disease Division Director Kris Ehresmann said in a statement. 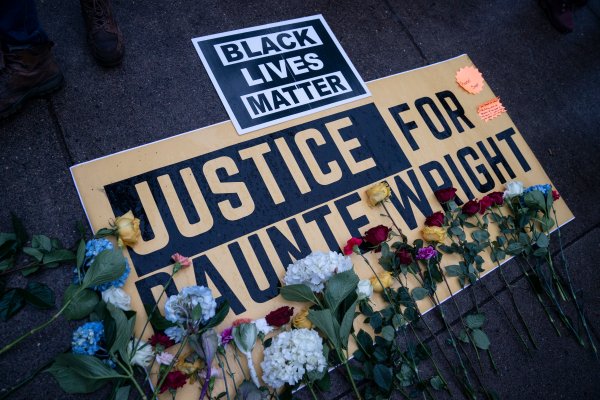 Minnesota Cop Who Fatally Shot Daunte Wright Will Be Charged
Next Up: Editor's Pick