People Have Been Reusing Clothes Forever But Thrift Shops Are Relatively New. Here's Why

Friday is National Thrift Store Day, and secondhand stores nationwide will be offering deals to encourage people to give back by shopping. But while people have been repurposing worn-out clothing for as long as clothes have existed, thrift stores are a relatively new invention in American history.

In an earlier era nothing went to waste. “If you had a dress and it got worn out, you’d tear it up and make a pinafore for your daughter, and when that got trashed, you’d tear it up and stuff your chair with it,” explains historian Jennifer Le Zotte, author of From Goodwill to Grunge: A History of Secondhand Styles and Alternative Economies.

That changed in the late 19th century, for a number of reasons. For one thing, cities grew rapidly—partly because of the historical surge in new arrivals during America’s biggest wave of immigration. The industrial revolution introduced the mass-production of clothing, changing the game. The more affordable it became to buy new clothes, the more people thought of clothes as disposable. Le Zotte points out that as urban populations grew, the size of living spaces shrunk, and more possessions were being thrown away. In addition to improved waste management systems, pawnshops and scrap materials sprung up during this period in an effort to find new uses for these items.

But there was a stigma attached to wearing used clothes that had been owned by a stranger. Not only were the items themselves a sign of a lack of money, but there was also bias against the people selling them. Used clothes were often available from pushcarts predominantly started by Jewish immigrants, whose professional options were often constrained by anti-Semitism. That prejudice rubbed off on their wares. For example, the May 3, 1884, issue of the Saturday Evening Post ran a satirical story about a girl who got smallpox from a dress she bought from a Jewish-owned resale shop.

And yet it was clear that real money could be made in the thrift business. One group of people who saw the possibilities were Christian ministries looking for funding for their outreach programs. The religious affiliation of groups such as the Salvation Army and Goodwill offered a source of legitimacy, LeZotte argues. Americans started giving to charity more during this period, too.

Salvation Army’s “salvage brigade” launched in 1897 out of the basement of a men’s shelter. Residents went around the neighborhood with pushcarts asking for used clothes, and they got food and lodging in return. A Methodist minister launched Goodwill, a similar operation, in Boston in 1902, hiring poor and disabled people to collect the goods and do any necessary repairs. In turn, the offerings for sale in those groups’ shops gave immigrants a place to find clothes and become “Americanized.” Many thrift stores also offered social-service operations in addition to retail goods.

By the 1920s, thrift stores were as organized as department stores. Goodwill, for instance, had a fleet of trucks collecting clothing and housewares from more than 1,000 households. The terminology had changed too: Once considered “junk shops,” the word “thrift” reflected a marketing appeal that allowed middle-class housewives to “feel virtuous about buying something new because they can give something back,” Le Zotte says.

By 1935, there were nearly 100 Goodwill stores nationwide, and thrift stores made up half of the Salvation Army’s annual budget by the time of the 1929 stock market crash.

During the Great Depression, demand outstripped supply, as more people couldn’t afford to part with their belongings and buy new ones. The same thing happened during World War II. During the period of post-war prosperity, business boomed at the Salvation Army and Goodwill thrift stores, as people increasingly donated their clothes so that they could redecorate their homes and refresh their wardrobes with newly-developed, better-quality synthetic fibers and more colorful clothing. Consignment shops catering to a high-end clientele started to emerge in the 1950s, and wealthier consumers started coveting “vintage” clothes. The thrill of finding couture at a more affordable price has never waned. Garage sales as a kind of charity fundraiser became popular during that period too, and the environmental movement later promoted them as a form of recycling.

In the 21st century, shoppers don’t have to leave their home; they can browse and buy luxury consignment and secondhand wares online at websites like The RealReal and thredUP. An IBISWorld Industry report observed that in the aftermath of the 2008 global financial crisis, there was an uptick in companies opening for-profit thrift stores as cash-strapped people looked for more affordable fashion options. Macklemore’s song “Thrift Shop” topping the Billboard Hot 100 in 2013 was seen as a reflection of that increased foot-traffic.

Today, thrift stores are part of a $14.4 billion industry, according to an IBISWorld report on the state of the market. And as studies on consumer preferences suggest millennials like to shop with companies that donate to charities, the thrift-shop model won’t fall out of fashion again any time soon. 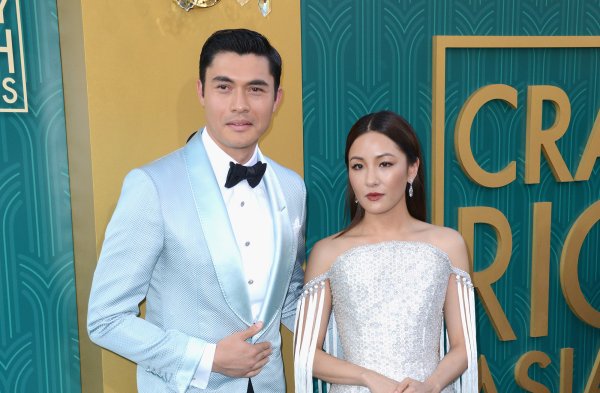 The Crazy Rich Asians Cast Looked Crazy Glamorous on the Red Carpet
Next Up: Editor's Pick