Smoke From California Wildfires Is Reaching the East Coast. Here's What That Means for the Air Near You

Smoke billowing from the destructive fires burning through California this summer has spread far beyond the Golden State — reaching the East Coast.

The National Weather Service says smoke from the raging fires out West has impacted cities thousands of miles away — and the atmosphere above them. Residents in states like Missouri, Ohio, Mississippi, Virginia and even New York and Massachusetts can see the smoke manifest itself through grey skies and vibrant sunsets, the National Weather Service says. And those in fewer states throughout the Midwest, South and East Coast are breathing in air that has been impacted by the smoke as well.

But how exactly does smoke travel this far? Andy Edman, chief of the science technology infusion division at the National Weather Service, says small particles of smoke that come from the fires can stay in the air and move through the Earth’s atmosphere — all the way to the East Coast. The smoke sits more than a mile above the Earth’s surface, but can move down through strong winds called jet streams and have an impact on air quality.

“Where the smoke is in the atmosphere will make a difference on the impact a human being will receive,” Edman says. For example, with the smoke far from the Earth’s surface, Edman says, “if you’re in D.C. or New York, if you walk outside, it will all seem sunny but if you look up at the sky, it will be grey.”

The National Weather Service has two relevant maps that explores the issue. One shows the path of “vertically integrated smoke” — that is, the smoke that sits far above Earth’s surface in the atmosphere and impacts the sky you see above you.

Courtesy of the National Oceanic and Atmospheric Administration

The other map shows the movement of “near-surface smoke,” which, as its name suggests, shows the levels of smoke near the Earth’s surface that have an impact on air quality.

Courtesy of the National Oceanic and Atmospheric Administration

Particles from smoke near the Earth’s surface can cause a range of health issues, including respiratory problems, and aggravate lung and heart issues. Officials advise people living in areas impacted by the smoke to take safety measures by staying in doors and running air conditioning units.

Astronauts aboard the International Space Station captured images of smoke from these fires from space earlier this week, showing the smoke’s eastward shift and massive reach. Edman, of the National Weather Service, says not all fires can create this long-ranging stream of smoke, but the cumulation of fire after fire after fire in the state has made it possible this time around.

“When you have that many fires, it’s not uncommon for that smoke to go fairly long ways downstream,” Edman says.

Smoke particles from fires in California traveled far last year, too, when satellite images from NASA showed the smoke traveling over to the East Coast. Thanks to new technology, Edman says, the National Weather Service has been better able to track the movement of smoke across the U.S. from fires based in California, capturing it in visualizations and maps for just a few years now.

Meanwhile, in California, 15 active wildfires are burning throughout the state as a destructive and record-breaking fire season rages on. The Mendocino Complex fire just north of San Francisco became the largest fire in state history earlier this week, scorching through 307,447 acres and destroying 119 homes as of Friday morning. Other fires have blazed through tens of thousands of acres across the state. That includes the 181,000-acre Carr fire, which has destroyed more than 1,000 homes in Redding, Calif., and taken at least eight lives. The Ferguson fire blazing near Yosemite National Park prompted park officials to close popular sections of it for the first time in 20 years (and during peak season), and the Holy fire down in Orange County forced tens of thousands of residents to evacuate their homes.

Fueled by extremely dry vegetation, record-setting temperatures and the aftermath of a years-long drought, fire seasons in California have grown more intense in recent years and death and destruction has become the norm. 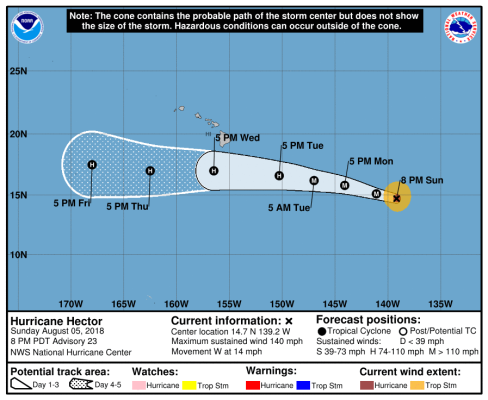 Hurricane Hector Is Barreling Towards Hawaii and Could Hit Near the Erupting Volcano
Next Up: Editor's Pick