'She's Clearly Reacting to a Loss': Experts Say Killer Whale Carrying Her Dead Calf for 17 Days May Actually Be Grieving

A mother orca whale is still carrying the body of her calf 17 days after it died, in what some experts say may be an unprecedented testament to the strength of the species’ familial bonds.

The whale, known as Tahlequah or J35, is one of just 75 Southern Resident killer whales left in the ocean, and her calf — which died minutes after it was born last month — was the group’s first live birth since 2015. Tahlequah has been spotted in waters off the Pacific Northwest multiple times over the past two weeks, often pushing her calf’s corpse through the water or swimming with it balancing on her forehead. Other members of the pod have even taken turns carrying its body.

The heartbreaking display of apparent grief has captivated onlookers — and stymied experts.

The Southern Resident killer whales’ endangered status and cultural significance in both the U.S. and Canada has made them arguably the most studied whales in the world, says Peter Ross, a killer whale expert and vice president of research at conservation group Ocean Wise. But despite that close observation, Ross says, experts haven’t seen anything like this before, which makes it all the more noteworthy.

“This is unusual behavior,” Ross says. “It’s not normal. We haven’t seen it before. What it means — who knows?”

Dennis Christen, senior director of zoological operations at the Georgia Aquarium, says the strong bonds between mother whales and their calves can prompt this type of behavior for short periods of time. But staying with a dead calf for 17 days is unusual, he agrees, even for a such a social species.

“We do know that animals form very strong bonds, and killer whales are very well known to have very strong social relationships with their family members,” Christen says. “[Tahlequah] is an experienced mom — she’s had a calf before — so she’s doing what she has a very strong instinct to do.”

Southern Resident killer whales may have an especially strong tendency toward this type of behavior, Ross says. Whereas Bigg’s killer whales, which eat marine mammals, tend to hunt in small groups because they need the element of surprise, Southern Resident whales’ fish-only diet, which doesn’t necessitate stealthy hunting, allows them to travel in large groups, Ross explains. This feeding pattern builds a family-centric culture, which may be compounded by the fact that females have only a few calves during their lifetimes, making them very close with their young, Ross says.

“These are highly intelligent, highly social animals, and they have cultures,” Ross says. “They’re like family units.”

Tahlequah’s past and present behavior illustrates that fact. Two years ago, Christen remembers, Tahlequah’s sister died and left behind a nursing calf. Tahlequah “adopted” the calf and tried to care for it, until the baby ultimately died without its mother, Christen says.

Those incredible acts have led many observers to assign human emotions to Tahlequah — a natural tendency, Ross says. “One of the reasons the story is rather heart-wrenching is the fact that we’ve grown to truly marvel at this iconic species and I think we see a little bit of us in them,” Ross says. “We look for things that we might understand or explain on the basis of our own experiences.”

Nonetheless, it’s hard to say for sure whether Tahlequah’s behavior means she has more empathy or maternal instinct than other animals, Christen says. Still, it does suggest she’s likely grieving in some form.

Though scientists have said they won’t separate mother and baby, the reaction has gone on long enough to raise alarm bells, especially since so few Southern Resident killer whales remain, Christen says. (In fact, scientists are currently trying to treat another member of Tahlequah’s pod, J50, with antibiotics, since the whale shows worrying signs of malnutrition and infection.)

“She’s expending more energy trying to carry this calf around. Is she eating what she needs to eat? Is she already nutritionally stressed and this is complicating matters?” Christen says. “There should be a strong sense of concern for her well-being.”

The experts say it’s impossible to predict how long Tahlequah may continue her behavior, but Christen says other species, such as primates, have been observed acting similarly, stopping only when the deceased baby begins to decompose and become unrecognizable. The same may be true for Tahlequah, he says, but only time will tell.

As the world watches, Tahlequah’s behavior should be a reminder of how little humans really know about the inner workings of animals, Christen says.

“We’re talking about animals we think we know a lot about,” he says, “but ultimately, there’s so much more we have to learn.” 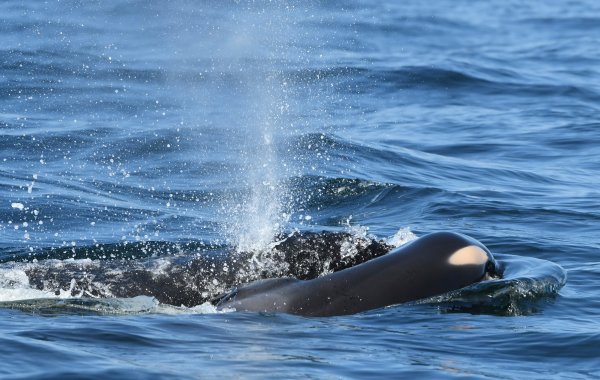 An Orca in 'Deep Grieving' Has Been Carrying the Corpse of its Calf for a Week
Next Up: Editor's Pick