Kanye West might have worried a little bit about wife Kim Kardashian West when she visited President Donald Trump.

When Kimmel, 50, asked West how he felt about the reality star meeting Trump on behalf of a 62-year-old great-grandmother who was incarcerated for 22 years, the father of three said he was proud.

“She’s super passionate about it and it was amazing for her to see that dream come true,” he told Kimmel.

When the host asked if he was ever worried about Kardashian West being alone in the presence of the president, the rapper gave a simple answer.

“He is a player,” West said to a round of applause.

West also spoke about his support of Trump saying he wouldn’t allow himself to be bullied into supporting a particular political party or candidate.

“You know, it’s funny, in this world that we live in there’s two main motivating forces. I tweet about it all the time: love and fear. you can’t explain love,” he said.

“My cousin is locked up for murder. I love him, he still did a bad thing but I still love him. As a musician, an African American guy on Hollywood, all these different things, everyone around me tried to pick my candidate for me,” West said. “And they told me every time I said I liked Trump I couldn’t say it out loud or my career would be over, I’d get kicked out of the black community because blacks are only supposed to have a monolithic thought, we can only be Democrats.”

“I said it right before I went to the hospital and when I came out I had lost my confidence. The confidence to take on the world and the possible backlash. It took me a year and a half to have the confidence to stand up and put on the hat no matter what the consequences were,” he said, referring to when he showed off his “Make America Great Again” hat.

Kimmel challenged the star on his support for Trump in light of the rapper’s famous stand against former president George W. Bush after Hurricane Katrina.

“There are families being torn apart at the border of this country,” Kimmel said. “There are literally families being torn apart as a result of what this president is doing. Whether we like his personality or not, his actions are what matter. You so famously, and so powerfully said, “George Bush doesn’t care about black people.” What makes you think that Donald Trump does or any people at all?”

The question was met with silence and the host quickly threw to a break.

The rapper beamed as he discussed his favorite category of adult videos, which he says are those that feature interracial couples as they reflect his reality.

Kardashian West also made an appearance on Jimmy Kimmel Live! at the end of July in which she said she and her husband don’t always talk about politics in the privacy of their home.

“I always respect what another person thinks and to make it clear, when we would talk about it and would talk about policies, he doesn’t necessarily agree with [Trump’s] policies but he likes his personality and how he made it to be president when everyone really underestimated him,” the KKW Beauty founder said.

“[Kanye]’s not political so he doesn’t really dig deep with what’s going,” she added, “I have nothing bad to say about the president.” 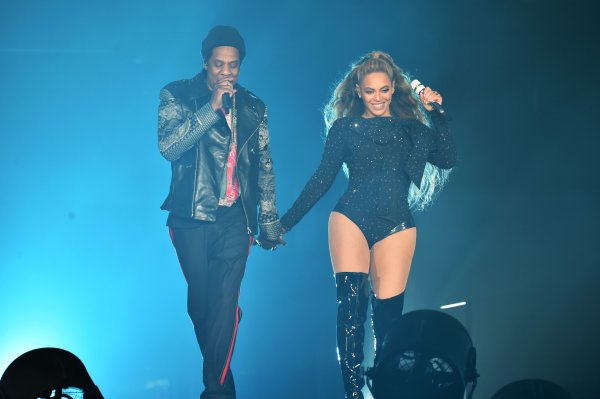 "Beyoncé and Jay-Z Day" Is Now a Holiday in Minnesota
Next Up: Editor's Pick