Getty Images
Ideas
By Margaret A. Hagerman
Hagerman is a sociologist and the author of White Kids: Growing Up With Privilege in a Racially Divided America.

In a moment of deep racial and political divides, when explicit racism frequents our news and our communities, white parents have concerns about how to raise white kids who are kind, compassionate and, importantly, not racist. The advice they most often receive is simple: talk more to your kids about race and racism. This is certainly important. But I have seen first-hand that it is not enough.

For two years, I studied 30 affluent, white families in a Midwestern community. My research shows that a crucially influential aspect of raising white kids in America is often overlooked: the social environments in which they grow up. White kids learn about race as a result of their own independent experiences — not just conversations. Their lived experience and their interactions with peers, teachers, neighbors, coaches, siblings and strangers matter greatly. The choices parents make about how to set up children’s lives influence their kids’ ideas about race and racism. The neighborhood they live in, the school they attend and the activities they participate in — sports leagues, religious organization, clubs, summer camps — set the parameters for how kids understand race. And this is true whether parents are consciously aware that these choices matter or not, and regardless of what parents explicitly say about race.

I interviewed 36 boys and girls between the ages of ten and 13. I observed them in their everyday lives. Approximately half of the kids in the study attended diverse schools, lived near black or Latino neighborhoods and participated in activities with children of color on a regular basis. The majority of these white kids were comfortable discussing race, conveyed complex ideas about racism and had applied experiences participating in social activism. As one 11-year-old white child growing up in this diverse context said, “I think [racism] is a way bigger problem than people realize. It’s nowhere near what it used to be… it’s just different and white people don’t realize it… people want to hide it.”

But the rest of the children in my study attended predominantly white schools, lived in almost entirely white neighborhoods and participated in activities with very few children of color. These white kids joked around about race with their friends, using the phrase “that’s racist” as an insult akin to “that’s stupid,” and had limited understandings about both contemporary and historical aspects of racism in America. This was true in families where parents spoke openly about race as well as in those where race was perceived as an unnecessary topic for family discussion. As one 11-year-old white child growing up in this context told me, “Racism was a problem when all those slaves were around and that like bus thing… like Eleanor Roosevelt, and how she went on the bus. And she was African American and sat on the white part… but after the 1920s and all that, things changed.”

In predominantly white contexts like this, parents often articulate the conundrum that Heather Johnson explored in her 2014 book, The American Dream and the Power of Wealth: Choosing Schools and Inheriting Inequality in the Land of Opportunity. They say that America is a meritocracy with equal opportunity yet then confer tremendous educational privileges to their own kids by opting for private, elite schooling and tutoring, expensive enrichment programs and so on. According to the National Center for Education Statistics, in 2015, white students constituted the largest percent of students attending private Catholic, other religious, and non-sectarian private schools. I found that kids I interviewed who attended private schools attended whiter schools and perceived that they were smarter and more successful than their public-school peers. As such, these kids developed understandings of where they fit into the world. They told me that they knew they were special and more deserving than other kids.

But even in diverse racial contexts, parents’ actions do not always line up with what they say they believe. For instance, as Amanda Lewis and John Diamond show in their 2015 book Despite the Best Intentions: How Racial Inequality Thrives in Good Schools, although white parents often say they want diversity in their children’s lives, their actions demonstrate their desire to protect practices of segregation within diverse schools that offer advantages to their kids. Rather than finding ways to improve the experiences of all children at their school, white parents in Lewis and Diamond’s book use their material, cultural, social and symbolic resources to advocate for their own child through practices like ensuring their child is placed in upper-level courses with the best teachers. Though these privileged parents are not directly expressing racial animosity when they advocate in this way, they are, in effect, perpetuating inequality by hoarding opportunities for their own kids. I found in my research that these types of parent behaviors shape how children understand themselves, their position in the world and what they deserve.

How white children learn about racism in America does not only happen during the interactions they have at school, though. Everyday behaviors of white parents also matter: when to lock the car doors, what conversations to have at the dinner table, what books and magazines to have around the house, how to react to news headlines, who to invite over for summer cookouts, whether and how to answer questions posed by kids about race, who parents are friends with themselves, when to roll one’s eyes, what media to consume, how to respond to overtly racist remarks made by Grandpa at a family dinner and where to spend leisure time. (Restaurants, vacation destinations and community events can be deliberately and by-default mostly white — or purposefully not.)

These small actions send subtle yet powerful messages. Parents may not even be aware that they are conveying ideas about race through these behaviors, but children learn from them all the time. In this sense, when it comes to communicating with white children about racism, parents’ actions often speak louder than their words.

The conversations parents have with their white children about race and racism matter — it’s just that so does everything else parents do. Rather than focusing solely on what they say to kids about race, white parents should think more critically and carefully about how what they do on an everyday basis may actually reproduce the very racist ideas and forms of racial inequality that they say they seek to challenge. 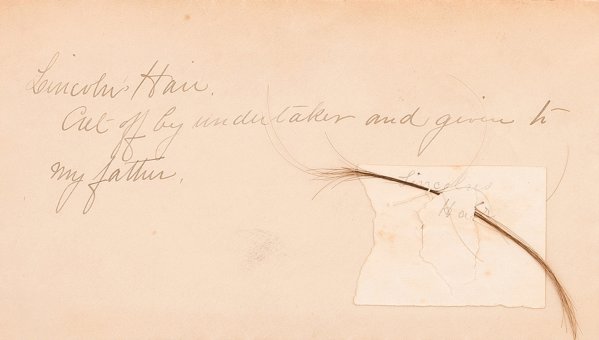 These Strands of Lincoln's Locks Could Sell for Thousands of Dollars. What's Behind the Fascination With Presidential Hair?
Next Up: Editor's Pick