The Meg Is Absurd But Jason Statham Makes It Worth Watching

Megabeast: helicopters are no match for an angry prehistoric shark in The Meg
Warner Bros
By Stephanie Zacharek

There are two great Mugs in The Meg, and only one of them belongs to Jason Statham. The Meg‘s title character is a mammoth shark or, more specifically, a supposedly extinct megalodon, a sullen creature of the deep with tiny, disgruntled eyes and a frown of a mouth lined with deadly triangle teeth. Sharks are angry looking to begin with, and if you were a 75-ft.-long prehistoric specimen living peacefully in a hidden ocean paradise, you too would be surly if humans started poking around in your business. The Meg is miserable and mean, but when he–she? it?–is onscreen, you know you’re in the presence of a star. Don’t even try to look away.

The Meg isn’t a real shark, of course, but a feat of special-effects trickery. Statham is the real thing, and he’s key to the effectiveness of this good-natured and often highly ridiculous adaptation of Steve Alten’s 1997 sci-fi potboiler, directed by Jon Turteltaub (National Treasure). Statham plays Jonas Taylor, a rugged, deep-sea rescue dude who reluctantly agrees to help the staff of a fancy ocean-research laboratory: its founder and his sea-critter expert daughter (Winston Chao and Li Bingbing) have just spent a huge chunk of obnoxious billionaire Rainn Wilson’s money to launch an ambitious ocean-exploration project. Then our bad-tempered beastie shows up. Need someone to dive off a boat and harpoon a prehistoric miscreant with a tracker? Jonas is your guy.

The Meg knows how silly it is, and Turteltaub and his actors make the best of dialogue that seems to hail from a time when dinosaurs roamed the Earth: “I can’t get a signal.” “That living fossil ate my friend.” “Man vs. Meg isn’t a fight. It’s a slaughter.” Statham is in on the fun, yet he somehow also floats just a bit above the movie’s rampant absurdity. You believe every insanely unrealistic thing he does; his dignity is only reinforced by the velvety rasp of his voice. Man vs. Meg isn’t a fight. But that’s only because Statham makes it more of a dance. 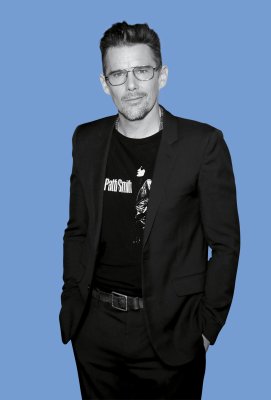 Ethan Hawke Refuses to Complain About Getting Older
Next Up: Editor's Pick