Ideas
By David Runciman
Runciman heads the politics department at the University of Cambridge and is the author, most recently, of How Democracy Ends.

Images of suffering children have a unique power in politics. They forced the Trump Administration to end its policy of ripping migrant children from their parents at the southwest border. In 2015 a photo of a dead 3-year-old who drowned trying to reach Greece also inspired policy changes across Europe. But the goodwill did not last.

Three years on from that awful image of the late Alan Kurdi lying facedown on a Turkish beach, the wave of sympathy in Europe has almost entirely vanished. The politics across the Continent are now more toxic and divisive than they were before. Italy’s hard-line Interior Minister Matteo Salvini insists that his country’s ports are closed to all new arrivals. Angela Merkel’s 2015 decision to open up Germany’s borders to hundreds of thousands of refugees has provoked strong backlash. Her own coalition partners have threatened the survival of her government unless she changes course. Sebastian Kurz in Austria and Viktor Orban in Hungary are united by their contempt for Merkel’s decision. She assumed that where Germany led, others would follow. She was wrong.

The European experience shows that temporary measures, especially if hastily adopted to answer outrage, do not fix the problem. They can even make it worse. And if it takes the sight of tormented children to move us to act, there is little prospect of a lasting solution, because we will be forever at the mercy of our emotional responses to passing events instead of durable values.

But by fixating on the sufferings of the young, we ignore the bigger picture: what makes immigration such a difficult issue for today’s democracies to resolve is the attitude of the old.

Ours are the first major societies in history where the elderly dominate the youth simply by weight of numbers. Stretching back to ancient Greece, democracy was always primarily a politics for young people. The constitutional safeguards that were put in place sought to protect against their excesses.

Now many aging Western societies are in desperate need of an influx of youth. This is particularly true for Southern European countries like Italy and Greece, where falling birth rates mean that the population is rapidly getting older — which is exacerbated by relatively high levels of emigration. Greece has seen hundreds of thousands of its most ambitious young people go to live abroad since the start of the financial crisis in 2008. Young people move. Old people stay put.

Who is going to do the work that drives the economy and supports the elderly? More immigrants is the obvious answer. But the cause of the problem is also what stands in the way of a solution: aging populations are where resistance to immigration is often fiercest. The young are generally more comfortable with multicultural communities, but an elderly majority has the growing power to make its attitudes the ones that count. This could be a vicious cycle: keeping migrants out reinforces the generational divisions in democratic politics.

The U.S. is not there yet. While a Pew study in June found that 38% of Americans ages 65 and older were unsympathetic toward even immigrants in the country legally, America still is more youthful than Western Europe, in part because it has been much more open to immigration in the past. Pulling up the drawbridge would risk a similar predicament.

Western Europe is not the only example of how this trend might play out. Japan, one of the oldest societies on earth, is also one of the most resistant to immigration. The Japanese appear far more comfortable with allowing robots rather than foreigners to do the work that a missing generation of young people would do. But it is not clear that the pace of technological change will keep up with growing demands. Nor is it obvious what will drive economic growth without a new generation of consumers to fuel it.

Another bet is that attitudes to immigration will change as younger generations age. But waiting for young people to grow old, and anticipating that they stay young at heart, is a long-term strategy with little to underpin it except hope.

The images of cages and crying children and impassive men in uniforms are enough to elicit a fear of returning to the 1930s. But although the words of anti-immigrant politicians — especially leaders like Orban, Salvini and Trump — are occasionally as bad as anything we have heard in the past, the underlying social situation is very different.

Back then, democracies collapsed because they could not accommodate the impatience of the young, who had been through the turmoil of war and economic depression. Now they are at risk from the intransigence of the old, who have known little except prosperity and peace. This anger will not produce a sudden collapse, because old people are very unlikely to resort to violence against the state. But it may mean a slow decline. 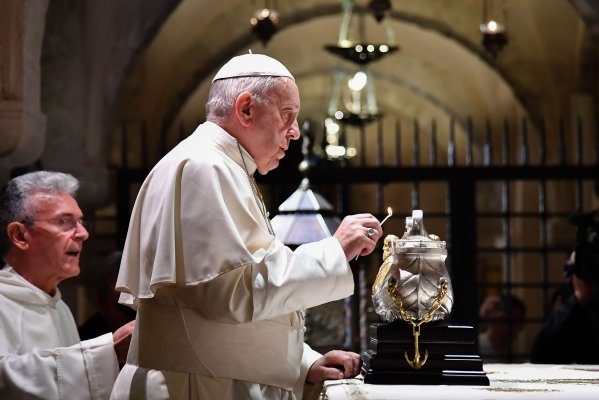 The Pope Changed the Catholic Church’s Position on the Death Penalty. Will the Supreme Court Follow?
Next Up: Editor's Pick