'We Are Dreaming of Justice.' Bangladeshi Students Demand Change After Traffic Deaths

Mohammad should have been studying for his upcoming college entrance exam. Instead the 17-year-old set out to document the mass student protests that have gripped Bangladesh’s capital for the past two weeks, pitting the righteous indignation of schoolchildren against the brute force of the state.

As his classmates fanned across Dhaka, Mohammad (who asked that his real name not be used for security reasons) snapped pictures of the protesters, some as young as 13, as they brandished flags and pumped fists. The backpack-toting teens seized the main thoroughfares lacing the mega-city of 18 million to demand a seemingly basic right: that their lives not be cut short by the heedless driving that has claimed so many young Bangladeshis.

“When my juniors were protesting on the streets, I couldn’t stay home reading on social media about all the good works [they] were doing,” Mohammad tells TIME.

A photographer is attacked during a student protest in Dhaka on Aug. 5, 2018.
Mamunur Rashid—NurPhoto/Getty Images

The outrage in Dhaka began on July 29 when a speeding bus killed two teenagers and injured 13 others. For nine straight days, the students’ chorus, “We want justice” grew in volume as classrooms from middle school to university level emptied into the streets.

But what began as a road safety protest quickly coalesced into a wider movement against incompetent governance and greed. For some, the protesters embody the younger generation’s festering discontent over the direction of their country, endemic corruption and their struggles to get by in the world’s most overcrowded city.

Read More: What the Arrest of Photographer Shahidul Alam Means for Press Freedom in Bangladesh

“In the people’s hearts, this frustration has been building up for a long time,” says Liton Nandi, general secretary of the Bangladesh Students’ Union (BSU). “After the students were killed, we felt we cannot continue living with injustice.”

Prime Minister Sheikh Hasina, who will face elections later this year, has shown little patience for the budding student movement in a country with a long history of student-led change. Over the weekend, more than 200 people were injured as police dispersed crowds with tear gas and rubber bullets. Almost two dozen journalists were also attacked and, according to local media, some were hospitalized.

A student protester at the East West University described fleeing with three of his friends as a group armed with sticks and metal rods mobbed the peaceful demonstration.

“The police and students league suddenly attacked us,” says the student, who asked to remain anonymous for fear of being arrested. When he saw a fellow protestor get injured in the left arm, he said he knew he needed to run. “I was terrified. My friends and I took shelter in a house nearby.”

Officials have denied that state security forces or government-aligned groups used violence against the students. But images of bloodied children have raised international alarm.

“Nothing can justify the brutal attacks and violence over the weekend against the thousands of young people who have been peacefully exercising their democratic rights in supporting a safer Bangladesh,” the U.S. Embassy said in a statement Sunday.

At the height of the protest, outraged students took it upon themselves to police the notoriously gridlocked and chaotic streets. They separated the rickshaws, cars and emergency vehicles and checked all drivers’ licenses — including government ministers — turning away those with invalid paperwork.

Instead of being recognized for trying to improve the roadways in a country plagued by up to 25,000 road fatalities a year, the students “have been perceived as a source of threat by [those] who are clearly the beneficiaries of the corrupt system,” says Iftekhar Zaman, director of watchdog Transparency International Bangladesh.

Government ministers pointed to dozens of vehicles reportedly vandalized by rioting students and accused them of inciting unrest, backed by the political opposition. The students insist their movement is non-partisan.

“We are just Bangladeshi students, dreaming of justice,” says Liton, the BSU secretary, adding that “the government is trying to demolish our movement by muscle power.”

Omar Waraich, deputy South Asia director at Amnesty International, said the swift use of force reflects the ruling Awami League’s electoral anxieties ahead of polls to be held by January.

“This is not a government that has been very friendly to dissent, whether from journalists, the opposition or people on the streets,” he said, adding that the level of violence “in this case is very striking because these are mostly peaceful kids asking for safer roads.”

While the students’ movement may not be over, many expressed fears of further retribution and bloodshed and their numbers have begun to ebb.

Several declined to speak about the protests, citing the arrest of prominent photojournalist Shahidul Alam, who was detained by plainclothes police on Sunday after an interview with Al Jazeera. He told the network that the protest was about much more than road safety and criticized the government’s response. On the way to court, he announced that he was tortured while in custody.

Mohammad pointed out that while government critics like Alam face up to 14-years imprisonment under controversial laws on internet speech, the maximum jail time for driving deaths is three years. (Bangladesh’s cabinet on Monday approved to raise the penalty to five years.)

In response to the students’ demands, the government has promised to enforce harsher driving penalties and better regulate the roads, but many doubt the sincerity of these reforms.

“The fact is, the people of Bangladesh don’t have faith in the government anymore,” says Mohammad. 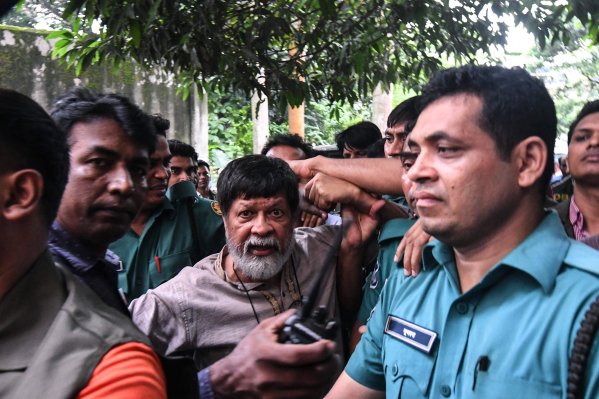 What a Photographer's Arrest Says About Press Freedom in Bangladesh
Next Up: Editor's Pick