The President and his lawyers are down to the last defense of the indefensible. As the evidence piles up that the President and his son and his son-in-law and his then–campaign manager knowingly solicited unlawful campaign assistance from the Russians — which lawyers for each have denied — team Trump offers up a remarkable Hail Mary: Asserting, as the President’s attorney Rudy Giuliani has said on TV, “Collusion is not a crime.” The President has tweeted the line. It means, in essence, Okay, even if we colluded, what’s wrong with that?

Here’s what’s wrong with that: It is a pathetic wordplay on the fact that the word “collusion” does not appear in the United States Code. It is pathetic because what does appear in the code is words like “conspiracy against the United States,” “misprision of felony,” “aiding and abetting,” “accessory after the fact,” all of which are related to the following words, which also appear:

The code goes on to say:

The law defines “solicit” to include to “ask, request, or recommend, explicitly or implicitly”.

So the relevant questions are, did the President or his proxies:

If they did, they are guilty of multiple felonies, whether the word “collusion” appears in the indictment or not.

The President’s team — and now his very own Twitter account — are pushing the proposition that he knew nothing about the June 9, 2016, meeting between his son Donald Jr., son-in-law Jared Kushner and then–campaign manager Paul Manafort, and a contingent of Russians who sought that meeting. (Though, according to anonymous sources cited by CNN and NBC, Cohen says then-candidate Trump did; one of Cohen’s lawyers declined to comment on the stories.) But that is irrelevant to the question of whether the President’s trio of trusted representatives were guilty of felonies arising out of that meeting. And the limited evidence that is at this point public seems to be overwhelming:

First, in preparation for the meeting, Donald Jr. (as well as Kushner and Manafort) was told in a series of emails that a person, at one stage described as “the Russian government attorney,” could supply evidence that would “incriminate” Hillary Clinton. Donald Jr. replied, in part, “I love it.” That is — by itself — a “solicitation” of something of value to the campaign.

Second, knowing the purpose of the meeting, all three attended. Simple attendance at the meeting is admissible evidence of conspiracy.

Third, Senate testimony given by a meeting attendee states that at the meeting, the Russians urged that they had information that the Democrats were getting funds from people who, the Russians alleged, had evaded taxes. Donald Jr. then asked the Russians, according to the testimony, what did they have directly on Hillary? The Russians allegedly responded, “We gave you the idea.” In effect, this would mean they told the trio, We got you started with the basic derogatory information on Trump’s opposition, you follow it up and develop it yourself! Asking for damning information on Clinton is solicitation of something of value to the campaign in the clearest terms.

Fourth, according to an email included in other Senate testimony, just shy of three weeks after the June 9 meeting, the Russians offered to set up a page on the Russian equivalent of Facebook to try and urge the 1.6 million site users who were Russian American voters living in the U.S. to support Trump. The letter says “Paul [Manafort] said he would welcome it.” Aside from an admission from Manafort or Donald Jr. or Kushner, or a recording of the meeting itself, a prosecutor could not ask for more direct evidence of “asking for,” “recommending,” “soliciting” Russian aid for a candidate in a federal election.

Interestingly, the Facebook idea and Manafort’s response is detailed in an email sent by the promoter of the meeting earlier that month. The note refers to a meeting, and is addressed to, among others: Donald Jr., the head of social media for the Trump campaign and the elder Donald Trump’s secretary. This memo — to those addressees — is the best case, beyond speculation by Steve Bannon and what media sources are saying Cohen knows, that candidate Trump himself knew of the June meeting. (Though again, that doesn’t matter at all when it comes to potential felony charges against his trusted trio.)

And all of this is public. It’s hard not to believe that Special Counsel Robert Mueller has a lot more evidence than we know about. 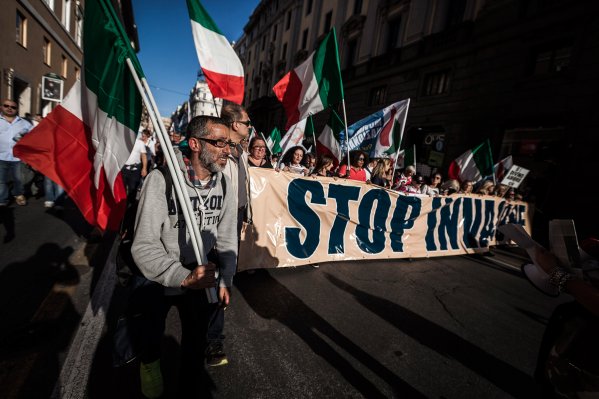 Author: The Reason Democracies Won't Solve Their Immigration Problems
Next Up: Editor's Pick