On Aug. 8, the Academy of Motion Picture Arts & Sciences made an announcement that has industry observers, Oscar prognosticators, film critics and random movie fans up in arms—or at least genuinely puzzled. Under the leadership of president John Bailey and CEO Dawn Hudson, the group announced, among other changes, the introduction of a new awards category, one for “outstanding achievement in popular film.”

No one yet knows exactly what that means; the Academy’s spare memo noted only that “eligibility requirements and other key details will be forthcoming.” But it’s easy enough to read between even the denuded-forest lines of the announcement: There has never been a greater divide between the movies that win the big Oscar prizes (like The Shape of Water, Moonlight, and Birdman) and the ones audiences see in huge numbers (the Star Wars films, any of the Marvel Universe films, or entries in the Mission Impossible franchise). The Academy seems to be attempting, feebly, to honor these big moneymakers in some way—as if money weren’t its own reward in Hollywood—while simultaneously rewarding moviegoers for their good taste. This is the “Good Job, Moviegoers!” award, and if nothing else, it tells us one thing:

The Academy thinks the public is stupid.

To be fair, sometimes it is. The question isn’t what you like, or even why you like it: It’s how much of a jerk you are about liking it. I say that as a person who has been on the receiving end of death and rape threats for failing to worship at the altar of a movie about a guy in a bat mask, or being unimpressed by a smart-alecky talking raccoon—which happens often to female critics, not just me. And when you’ve got people assessing a movie’s value or lack thereof by how well it honors their own cherished childhood, an era whose memory has been burnished into a glowing, all-powerful orb before which all humans must bow, you can assume you’re not witnessing the second coming of James Agee.

But the flip side is that you don’t even have to know who the hell James Agee was to enjoy a movie. Movies have been given to us by the gods for 1,001 reasons we’ll never be able to fully parse, but one of them is to give us pleasure. Smart pleasure, dumb pleasure: It doesn’t matter. That’s why it’s disheartening that the Academy should suddenly find the need to carve out a separate category for movies that maybe aren’t good in what they perceive as an artistic way but that lots of people simply like. Hollywood is now aware—stop the presses!—that it gives us “artistic” product and “entertainment” product, and it now needs to dole out separate awards to acknowledge as much. But why, and why now? And why can’t “entertainment” product also be “artistic” product?

The institution of this award raises so many more questions than it answers, and it may be Hollywood’s ego talking more than anything else. For the past several years, the big Oscar winners have been smaller, independently financed pictures (a la Moonlight) as opposed to large-budget big-studio prestige pictures. Maybe Hollywood—as a concept, as a group of businesspeople who sometimes at least pretend to care about inventiveness and artistry, as that weird, amorphous organism that it is—is ashamed that it long ago stopped giving us grand, smart spectacles like Lawrence of Arabia, or even dull but polished pictures like A Beautiful Mind. If those movies were made and released today, they might not be able to draw an audience, which is sad. But is that the audience’s fault, or is it Hollywood’s? Is it possible that by focusing only on what it knows an audience will buy—for example, several decades’ worth of Marvel Universe product—Hollywood has shaped moviegoers’ tastes, not necessarily for the better? That leaves only one path: Reaffirm, with an award, that the audience is always right, simply because it votes with dollars.

This new award also appears to be a cheap and not wholly honest way of making every moviegoer feel he or she is included in the conversation. We don’t yet know what the Academy’s criteria will be for granting this award, whether it will conduct an audience poll, or just give the dang thing to the one movie that made the most money. (That, at least, would be nakedly honest.) In its statement, the Academy also announced other changes, including shortening the awards telecast to three hours (which means certain awards will be presented off-camera, during commercial breaks). That’s surely a response to the fact that the 2018 awards broadcast, which lasted nearly four hours, had the lowest number of viewers of any Oscars ceremony to date. The Most Popular Award, or whatever the Academy decides to call it, seems to be part of a desperate measure to get butts in front of the television on Oscar night.

If moviegoers like the feeling of being part of a strategy, then maybe they’ll love the idea of the Academy pandering to them with this special award. But what ever happened to the idea of appealing to human beings’ better nature? To assuming that they’re reasonably attentive, sensitive beings who might actually respond to a movie like The Shape of Water if they went to see it? And what does this new awards category mean for a movie like Black Panther, a picture that’s popular but is possibly also “good” in accordance with whatever criteria the Academy uses to assess a movie’s quality (not that anyone really knows what those criteria are)? It’s probably safe to assume that the mere existence of Black Panther, a movie made by a director of color and featuring an almost exclusively all black cast, instigated the idea of this award in the first place. Hollywood just doesn’t know what to do with a movie like this. Does Black Panther get the “popularity”—or consolation—prize? Or is it also in the ring to win Best Picture? Or both?

And if the answer is both—then why do we need a popularity prize to begin with? Checking out a Best Picture winner like Moonlight, or The Shape of Water, or some other movie you’ve heard about but haven’t seen, won’t negate or nullify your pleasure in Guardians of the Galaxy II, or Baywatch, or Atomic Blonde, or John Wick 2. The movie gods are not here to pass judgment on your taste, but you shouldn’t expect them to give you a prize for it, either. After all, you didn’t make the movie. You just gave Hollywood your money for the honor of seeing it—which means Hollywood has you exactly where it wants you. 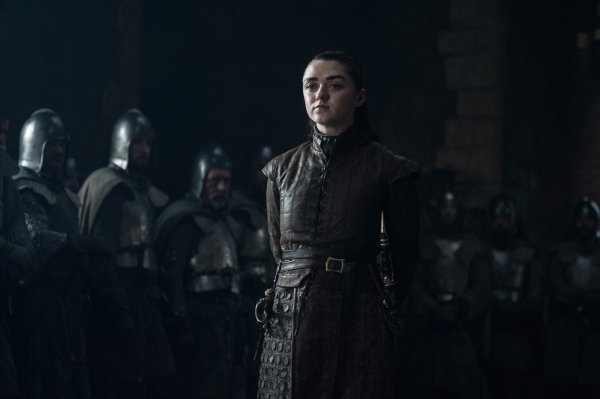 Maisie Williams Kept the Perfect Souvenir From the Game of Thrones Set
Next Up: Editor's Pick