In the wake of reports that Earth could be heading toward an irreversible “hothouse” state, Jimmy Kimmel is urging President Donald Trump to reconsider his stance on climate change.

“Not only won’t Trump address this, he’s rolling back regulations that were designed to slow it down,” Kimmel said. “And this is bigly important stuff. Somebody needs to get through to the president before its too late.”

So during Tuesday’s episode of Jimmy Kimmel Live!, the host tried out a new approach to convincing Trump that something needs to be done about global warming—airing a parody PSA focused on golf courses.

“Scientists say that by 2050, 80 percent of the world’s coastal golf courses could be submerged. Inland, droughts will dry up fairways and make putting greens unputtable. Rising sea levels in Florida will make exclusive luxury waterfront clubs uninhabitable,” a voiceover explained as a fake image of a destroyed Mar-a-Lago flashed onscreen. “It’s time to act, because it’s not too late to protect the most precious treasures of all.” 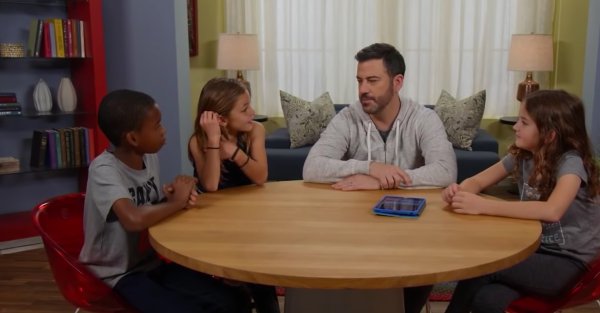 Jimmy Kimmel Learned About the Weird Videos Kids Love
Next Up: Editor's Pick