Photograph by Carrie Mae Weems for TIME
By Olivia B. Waxman

For the Aug. 20 cover, TIME asked artist Carrie Mae Weems to photograph director Spike Lee, whose latest film BlacKkKlansman — based on the true story of a black detective who infiltrated the Ku Klux Klan in the 1970s — hits theaters Friday.

Both are artists who aim to, through their work, shine a light on people who have been overlooked in American history.

The photoshoot is not the first time that Weems, a 2013 MacArthur “Genius” grant winner and Lee, the Oscar-nominated director, have crossed paths. Prints from her iconic Kitchen Table series appear in a scene from She’s Gotta Have It, his 2017 Netflix adaptation of his 1986 feature film. A photo on his Instagram feed recently hinted that the two are collaborating for the show’s second season.

Perhaps her best-known work, Kitchen Table (1990) is a series of photographic vignettes of Weems playing a woman engaged in various activities at the kitchen table.

“It’s a mock biography of one woman’s journey as she contemplates and negotiates what it means to be a contemporary woman who wants something different for herself,” Weems once described the work. “Even though it’s anchored around a black woman, my hope was always that it would be understood as a condition of women.”

It came out right as the national conversation about a woman’s place at the table — in the family, in the workplace — hit a boiling point in the early ’90s. It would be amplified by other milestones such as the release of Thelma & Louise and law professor Anita Hill testifying that she had been sexually harassed by Supreme Court nominee Clarence Thomas — both in 1991.

Like Lee, Weems often uses art as a way to reflect on history. As photo historian Deborah Willis described her approach to TIME in 2012, she “confronts historical depictions and restages them with ‘what if…’ questions,” citing From Here I Saw What Happened and I Cried, her red-tinted re-imagination of daguerrotypes of slaves by J.T. Zealy, commissioned by a Swiss naturalist Louis Agassiz to prove the racial inferiority of blacks to whites.

Artist Weems created a grid to celebrate Lee’s 30-year career as a filmmaker, beginning with breakouts She’s Gotta Have It (1986), School Daze (1988) and Do the Right Thing (1989). He has always tackled issues of race and identity in culture: “One of the constant criticisms for Do the Right Thing was that Spike would not provide the answers for racism,” Lee says.
Carrie Mae Weems for TIME

In fact, the blue-tinted grid of Spike Lee’s greatest hits in the latest issue is inspired by her 2009-2010 Untitled (Colored People Grid), pictures of black adolescents in different color tones. That piece, which challenges viewers to keep an open mind about color, was on display at the Guggenheim Museum in New York City, where Weems was the first African-American woman to have a retrospective show in 2014.

Such themes are all part of the self-described “cultural diplomacy” that she is pursuing. As she summed up her approach to making art in 2016, an artist’s “obligation” is to “make what you want to see in the world.” 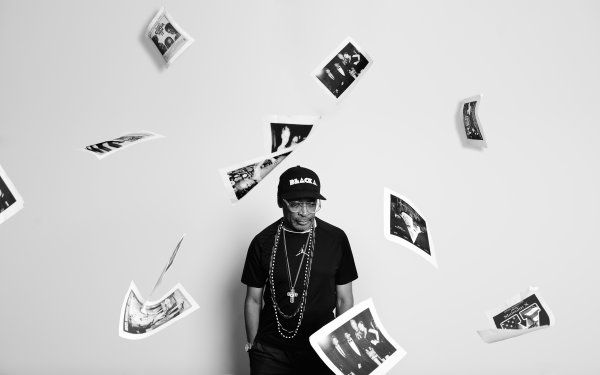 Spike Lee Wants BlacKkKlansman to Wake America Up
Next Up: Editor's Pick