Rick Gates Shows Why Trump Is So Worried About Witness Flipping

When Rick Gates took the stand in Paul Manafort’s Virginia trial Monday, he quickly showed the power Special Counsel Robert Mueller’s team can wield if they can get witnesses to “flip” against former friends and colleagues, a particular obsession of President Donald Trump’s as the Russia investigation grinds on.

By Monday, the jury in Manafort’s trial had heard from an FBI agent, high-end menswear salesmen, accountants and financial experts, among other witnesses, to testify about the tax and bank fraud that Trump’s former campaign chairman had been charged with. But court watchers had been eagerly awaiting Gates, who both the prosecution and defense seem to be hoping will be at the center of their case.

Gates, who was also a senior Trump campaign official, was Manafort’s righthand man for years. The defense signaled in opening arguments that they’ll try to pin the tax and bank fraud crimes at issue in this case on him. Gates has already pleaded guilty to one count of conspiracy against the U.S. and one count of making a false statement to investigators in the course of Mueller’s investigation.

Gates’s appearance in court marked a dramatic moment in the probe: the first visible case of a witness flipping, or turning on friends or colleagues in a case. Trump’s former adviser George Papadopoulos has reportedly been cooperating with Mueller, but the public hasn’t learned what he may have divulged. Trump is obsessed with loyalty in his inner circle, famously even demanding it of former FBI Director James Comey.

His preoccupation with the idea that confidantes or associates might turn on him came to the foreground recently when he fed rumors that his longtime lawyer Michael Cohen might flip, tweeting in April that journalists “are going out of their way to destroy Michael Cohen and his relationship with me in the hope that he will “flip”” and that “most people will flip if the Government lets them out of trouble, even if….it means lying or making up stories.”

In early July, Trump’s lawyer Rudy Giuliani also suggested Cohen might flip: “If he believes it’s in his best interest to cooperate, God bless him, he should cooperate,” Giuliani said at the time. Weeks later, when Cohen released damaging information about Trump, Giuliani abruptly changed his tune, saying Cohen doesn’t have any “credibility” and “he’s lied all his life.”

The government did not “let Gates out of trouble” for his cooperation, but prosecutors did agree to certain terms in a plea deal. Gates, who is facing five to 10 years in prison, testified Monday that as part of his plea deal he agreed to turn over evidence to the government and testify. In exchange, the government promised not to bring additional charges against him and drop a second indictment against him on tax and bank fraud charges.

The power for the prosecution of having a formerly close associate flip on a defendant immediately became clear when prosecutor Greg Andres started asking him questions.

“Did you commit any crimes with Mr. Manafort?” Andres asked.

Gates, who typically sports a beard but appeared in court clean-shaven, said he had conspired with Manafort to underreport Manafort’s income on his tax returns and hide overseas accounts. He was explicit at multiple points about Manafort’s agency in the crimes, saying he lied to accountants “at Mr. Manafort’s request,” that he told those accountants Manafort didn’t control any foreign bank accounts (which the prosecution says he did) “at Mr. Manafort’s direction,” and that Manafort “directed” him to categorize some income as loans in order to reduce his taxable income.

The importance of Gates’ appearance wasn’t lost on the onlookers crammed into the uncomfortable wooden benches in the back of the courtroom. When journalists heard that Gates would be next to testify, many of them fled the room to get the news out. (There are no phones or computers allowed in the court.) So many people jumped up that it caused a commotion, and Judge T.S. Ellis threatened to have people “excluded” if in the future they didn’t leave the court in a “quiet, orderly way.”

Ellis tried to hurry the prosecution along throughout the day, at one point scolding Andres as he asked Gates about Manafort’s political work in Ukraine. “I certainly hope you don’t mean to offer a history of Ukrainian politics,” Ellis snapped. Prosecutors still said they estimate having about three more hours of questions for Gates on Tuesday before cross examination can begin.

As Gates testified in a calm, dispassionate way about the crimes he says he and Manafort committed together (as well as crimes he says Manafort didn’t know about, including embezzling hundreds of thousands of dollars from him), Manafort appeared to be looking directly at his former colleague. Gates studiously avoided Manafort’s gaze and looked only at Andres, the judge or the jury.

At one point Gates, still without meeting Manafort’s eye, testified that his former boss is “probably one of the most politically brilliant strategists I’ve ever worked with.”

Even a flipped witness, it seems, can still have a nice word to say for his old boss. 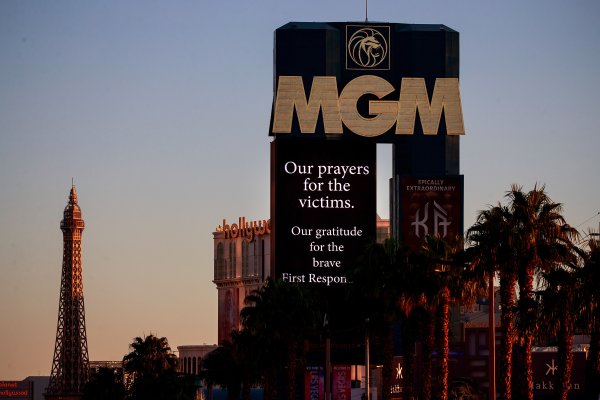