The Democratic Divide isn't Between Left and Center. It's Between Old and New

The parade of 2020 hopefuls through the freezing New Orleans convention center was like a preview of a movie you’ll be seeing in theaters whether you want to or not. Elizabeth Warren was there to shake her fist about consumer financial protections. Kamala Harris was there to say “what’s up” to black women candidates. Cory Booker was there to give a 33-minute speech that felt like a monologue from a college Shakespeare production.

But these Democratic senators weren’t the crowd favorites at last weekend’s Netroots Nation, the annual conference of progressive organizers and activists that’s long on idealism and short on deodorant. Warren’s Senate campaign distributed “PERSIST” signs that mostly sat on empty seats or fell to the floor. Attendees gossiped about whether racial-justice protesters would interrupt Harris’s speech because of her former work as a prosecutor; in the end, they didn’t bother. Julian Castro, once considered a promising Democratic up-and-comer, had the unlucky distinction of speaking after Alexandria Ocasio-Cortez, which means he delivered his speech to a crowd of turned backs filing out of the room.

It was newcomers like Ocasio-Cortez whom many attendees came to see. Without the pressures of a looming presidential bid, these speakers—many of them raw first-time candidates or recently elected newcomers—delivered scathing critiques of the politics of moderation and urged their fellow progressives to burn the old playbook and write a brand new one.

Chokwe Antar Lumumba, the 35-year-old mayor of Jackson, Miss., argued that the solutions to economic problems lie in radical new ideas, not moderate compromise. Democratic congressional candidate Gina Ortiz Jones got big applause for vowing to be the first woman to represent her district in Congress, the first openly gay member and Iraq War veteran from Texas and the first Filipina-American to serve in the House. And the undisputed star of the convention was Ocasio-Cortez, who came with a message that pushed the party towards the future by appealing to the past: for Democrats, she said, “it’s time to come home.”

“It’s time to remember that universal college education, trade school, a federal jobs guarantee, exploration of a universal basic income were not proposed in 2016, they were proposed in 1940 by a Democratic President of the United States,” Ocasio-Cortez said. “These are not new ideas. We are picking up where we last left off, when we were last most powerful.”

The scene at Netroots was an indication that the big split in the Democratic Party is no longer between the progressives who embraced Bernie Sanders in 2016 and the members of the party who preferred Hillary Clinton. That battle is over: the Sanders-led progressive movement has successfully tugged the party to the left, bringing ideas that seemed fringe in 2016 to the center of the mainstream Democratic agenda. Many of the party’s presidential hopefuls now embrace some of the biggest planks of the Sanders platform, from Medicare for All to legalizing marijuana to rejecting corporate donations. Instead, the party is caught in a tug-of-war between its old guard and its newcomers. Netroots suggested that the new faces are winning.

Progressive organizers see hints of a new voting coalition as well. Emboldened by Doug Jones’s Senate victory in Alabama and Stacey Abrams’ gubernatorial nomination in Georgia, they are pushed a new 2018 strategy: forget the white moderate “swing” voter, and focus instead on driving people of color and young voters to the ballot box.

“Democrats’ job is not to convince someone who voted for Trump to vote for us,” said Aimee Allison, president of She the People, which focuses on mobilizing women of color. “We actually don’t need those people. Our swing voters are from nonvoter to voter.” The Netroots programming underscored this shift. Most of the panels were about mobilizing black and brown non-voters to get to the polls, not persuading habitual voters to move to the left.

But that strategy doesn’t sit right with everybody. “There’s a sentiment that if you voted for Trump once, we’re done with you,” says John Fetterman, the mayor of Braddock, Penn., who is running for lieutenant governor. “But we’re the party of second chances. Why would we punish people for their entire lives for a mistake they made?” He says some white voters in Pennsylvania who cast a ballot for Trump, particularly union members, remain among the “persuadables.”

But Fetterman was one of the few people at Netroots with an interest in persuasion. The rest of the conference seemed to display a contempt for white moderates and waffling Trump voters. And that makes Fetterman nervous. ““Can Democrats win without the white working class?” he asks. “Why would we want to find out?”

Despite some disagreements, the Democrats at Netroots seemed more united than divided. Many said the clobbering in 2016 was an opportunity to regroup and come back stronger, tougher, with fewer corporate ties and more of what Ocasio-Cortez calls “moral clarity.”

“We’ve lost the House, the Senate, and the Presidency, but that’s all right,” Ocasio-Cortez said. “Because it’s always darkest before the dawn.” 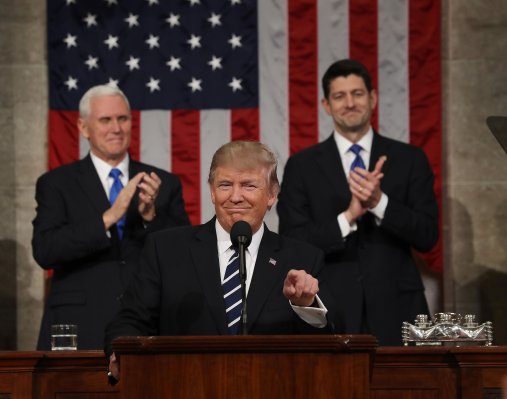 President Trump Told Congress Something Untrue. Here's Why That's a Big Deal
Next Up: Editor's Pick