Argentina Votes Today on Legalizing Abortion. Here's What That Means for Women's Rights Across Latin America

For years, Latin America’s tough abortion laws looked unlikely to change. Not only does the anti-abortion Catholic Church continue to exert a profound influence on public life, most major political parties also maintain a hard line on the issue. And so for more than 97% of the 345 million women living in the region, abortion is almost always illegal, as well as unsafe. It’s a situation that Amnesty International’s secretary general has described as “an extreme form of violence against women,” saying the continued criminalization of abortion had compromised Latin America’s progress on human rights.

But in 2018, just as abortion rights in the U.S. look more uncertain than they have in decades, Latin America has arrived at the brink of massively expanding them. Argentina’s Senate will vote Wednesday on a bill to allow abortion up to 14 weeks of pregnancy, following narrow approval by the lower house of Congress in June. On Friday and Monday in neighboring Brazil, the Supreme Court held a hearing on decriminalizing abortion up to 12 weeks, inviting more than 60 experts and advocates on both sides of the debate to make their case. Brazil and Argentina are the first and fourth most populous countries in the region, respectively. That means the abortion rights of two fifths of Latin American women—or 126 million people—are up for debate this week.

Of the 23 countries in Latin America and the Caribbean, only Communist Cuba, one area of Mexico and tiny, progressive Uruguay allow elective abortions up to 10, 12 and 12 weeks respectively. Six countries—Nicaragua, Honduras, El Salvador, the Dominican Republic, Haiti and Suriname—have a total ban. Women in the rest of the region, including in Argentina and Brazil, are generally allowed to terminate pregnancies only if they have been raped, if there is a risk to their life or health or in cases of fatal fetal abnormality. Even in these circumstances, human rights experts say women can still struggle to obtain an abortion because of barriers such as a need for judicial authorization or difficulty in finding a doctor who will perform an abortion.

While Latin America is following a global trend toward liberalization—with 27 of the 28 countries who have modified their abortion laws since 2000 doing so to expand abortion rights—abortion remains a polarizing issue across the region.

There are two main reasons for this taboo, says Catalina Martínez, Latin America and the Caribbean Director at the Centre for Reproductive Rights. “First, the conservative influence of the Catholic Church itself, and second, the way that influence has extended and solidified in political parties.”

Though it remains strong, the Catholic Church’s influence in the region is waning slightly. A regional polling group found in 2018 that the proportion of Latin Americans identifying as Catholics has fallen from 80 percent in 1995 to 59 percent now. (There is significant variation from country to country: as low as 37% in Honduras and as high as 80% in Mexico.) Abortion rights activists in the region took heart from Ireland’s vote in May to remove one of Europe’s last abortion bans, despite 78% of Irish people identifying as Catholic.

People demonstrate against the legalization of abortion outside the National Congress in Buenos Aires on August 01, 2018.
Eitan Abramovich– AFP/Getty Images

But in Argentina, where Pope Francis was born and is widely revered, the Catholic Church’s influence on politics is stronger than in Ireland. It has mounted a fierce campaign against the bill to legalize abortion, urging senators not to approve the law, and several have cited religious opposition when announcing they will reject the bill on Wednesday. Buenos Aires’ auxiliary bishop Oscar Ojea told local media “it would be the first law in democratic times to allow the elimination of one human being by another.”

In June, Pope Francis said that abortion in cases of congenital abnormality was the same as “what the Nazis did to purify the race [with eugenics programs]” but with “white gloves.”

Not all those campaigning to keep abortion illegal view it as a religious issue. Despite being a Catholic himself, Matías Ferrari, an office worker from the suburbs of Buenos Aires who campaigns with anti-abortion group Yes to Life says his stance “doesn’t have to do with religion necessarily. Science shows life begins at conception. That’s it. And we should never terminate a life.”

Like many in Argentina’s debate, Ferrari cites adoption as an alternative to abortion. “Termination just shouldn’t be an option,” he says. “There are lots of other options that you can take before pregnancy and there are options you can take after.”

Abortion rights campaigners, though, say Argentina’s vote is not a choice between abortion and adoption, but between safe and unsafe abortion. “The consequence of voting against the law would be that women in Argentina would are left with the status quo and the status quo is not that women don’t have abortions,” says Tamara Taraciuk, a senior researcher at Human Rights Watch in Buenos Aires. “It’s that they have them clandestinely, and these end up being unsafe abortions. So they’re putting their life and health at risk.”

In Argentina, official figures from the Ministry of Health say 500,000 clandestine or illegal abortions are performed each year in a country of 44 million people. Even where the abortion itself is carried out successfully, a lack of post-abortion care and a fear of asking for help means complications can be more serious. Official figures suggest 50,000 women are hospitalized each year after botched abortions. Taraciuk says clandestine abortion is “the leading cause of maternal death.”

Across Latin America, three quarters of the 6.5 million abortions that take place are performed in clandestine, unsafe conditions—making it the second most dangerous region in the world to terminate a pregnancy, after Africa.

A common refrain for activists is, “Rich women have abortions, poor women die.” Wealthy women can afford to terminate their pregnancies in private clinics with safe facilities and to pay for after care. “The women that face greater barriers are poor women, who can’t pay for an abortion and can’t get it in public health centers,” Taraciuk says. “They’ll have to go to less safe places, or take pills, at home alone, without any support.”

In Brazil, Supreme Court Justice Rosa Weber called the hearing on abortion after Ingriane Barbosa Carvalho, a 31 year-old black woman, died in May from a botched clandestine abortion. She had quietly suffered an internal haemorrhage while telling her family the pain was a stomach ache, according to her brother. In 2016, the last year Brazilian health ministry records were available, 203 women died in similar circumstances. After Carvalho’s death, a women’s rights group and a leftist political party petitioned the Supreme Court to declare that criminalization violates rights to dignity and health care enshrined in Brazil’s 1988 Constitution.

Reports compiled by the media show around 330 women in Brazil were investigated for having an abortion last year, facing up to 3 years in prison. While decriminalization, which judges are now deliberating, would not immediately lead to Brazilian women having free access to legal abortion, campaigners say it would be a crucial first step and would prevent women suffering in silence when complications arise after illegal abortions.

In Uruguay, Martinez says, the public health argument was key to senators’ decision to legalize abortion in 2012. “Campaigners there were very smart about it because they used a language of public health, focusing on women’s health and how many were dying: what were the consequences of continuing to criminalize abortion,” she says.

Many credit Argentina’s unprecedented step towards legalizing abortion to the reinvigoration of women’s rights movements since 2015, when 200,000 people took to the streets of Buenos Aires to protest gender-based violence and femicide, which kills one woman in the country every 30 hours. Protesters used the slogan, “Ni Una Menos,” which translates as “Not One Less” or “Not One more Death” and has since been used to denounce the death of women through botched abortions.

Alongside that momentum, says feminist activist and journalist Laura Salomé Canteros, has been a period of political upheaval because of Argentina’s economic turmoil. “We’re in the middle of a lot of instability and I think that’s energized everyone—to know that we’re fighting for something real and we’re making progress, against so much adversity,” she says. “In the lower house we achieved a trans-party alliance of support for the bill,” she adds, pointing out that political parties chose not to tell their members how to vote, a rarity in a political scene normally firmly divided along partisan lines.

A woman shows a sign that reads 'I vote in favour of legal abortion' during a protest as part of the 'Not One Less' (Ni Una Menos) movement demanding legal abortion on June 04, 2018 in Buenos Aires, Argentina.
Patrick Haar – Getty Images

The outcome of the vote is uncertain, but Martinez says the pro-legalization side “need a surprise” to win, with 31 senators currently pledging to vote in favour, 37 against, 2 undecided and 1 abstention and 1 absentee.

Activists are adamant that, even if the Senate rejects the bill, Argentina has entered a new era on abortion rights. “If it passes, that would be historic,” says Martinez.”But if it doesn’t, the progress that people have made is already a win. It is something that will remain in the conversation and they’ll probably try again in a few years, with a different Congress.”

Women who want to legalize abortion in other Latin American countries have greeted Argentina’s “green wave”—named for the green flags and handkerchiefs adopted by activists—with solidarity. “I’ve spoken to activists in Chile, Colombia, Costa Rica, who are all talking about using Argentina to get this into their national conversations,” Martinez says. She adds that Argentina’s decision will be significant because it has long been a leader in the region on human rights issues such as freedom of speech and same sex marriage, which it legalized in 2010.

Giovanna Gómez, an 18-year-old student who campaigns to expand abortion rights in Vera Cruz, Mexico, says she’s seen an “intensification” of pro-choice group activities in Mexico recently. “The green wave spreading from Argentina is inspiring us to defend our rights too,” she says. That’s important, Gómez says, because “most people here don’t speak about topics to do with sex and reproductive health. It’s still considered a taboo that you can’t touch.”

In neighboring Chile, where abortion in cases of rape, incest and danger to the health of the mother was only legalized in 2017, Argentina’s campaign has divided the population. On July 27, a reproductive rights rally attended by tens of thousands of people in Santiago ended in the nonfatal stabbing of three women by far-right group. On August 1, a senator presented a bill to legalize abortion up to 14 weeks, but President Sebastian Piñera pledged to oppose any pro-leglization bill. Both sides have already taken up the blue and green colours used in Argentina’s abortion debate.

“There are very heated debates taking place throughout the region—in the media, in the courts, on the streets,” says Taraciuk. “And that’s healthy, because democratic debate has to accompany change. But we’ve no doubt as to what the outcome should be. Now, we’ve got an opportunity to put things right for millions of Latin American women.” 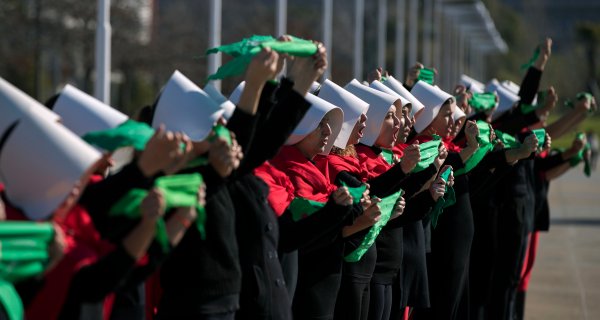