Indra Nooyi is stepping down as chief executive officer of food and beverage giant PepsiCo Inc., handing the reins to a top lieutenant in a transition that will draw attention to the dearth of prominent female CEOs in corporate America.

Nooyi, 62, will leave the role in October and remain chairman until early 2019. Ramon Laguarta, 54, who has been a candidate to take over since a promotion last year to president, will be just the sixth CEO in the 53-year history of the company.

Nooyi, who is from India, is the first foreign-born CEO of Pepsi and the first woman to lead the chips-and-soda behemoth, whose revenue topped $63 billion last year. Her departure thins the ranks of female CEOs running S&P 500 companies and comes at a time when Pepsi’s North American beverage unit is stagnating amid a general decline in soda consumption. In 24 years at Pepsi, including 12 as chief executive, she has helped the Frito-Lay unit grow in a challenging industry and added healthier drinks and snacks to a portfolio that includes Cheetos and Mountain Dew.

“I’ve had a wonderful time being CEO, but at some point you sit back and say, look, it’s a responsible move to effect an orderly transition and to have somebody else take over the leadership of this company,” she said in an interview. “Being a CEO requires strong legs and I feel like I ran two legs of a relay race and I want somebody else with nice strong legs and sharp eyes to come and lead this company.”

Nooyi attended graduate school at Yale University and joined Purchase, New York-based Pepsi in 1994 as head of corporate strategy, rising to the CEO job in 2006. At the time only a handful of women ran major U.S. companies.

Nooyi faced down activist investor Nelson Peltz, repelling a bid to break up the company, and has guided Pepsi through a tricky stretch as shifts in how U.S. consumers eat and shop have bedeviled the largest food and beverage companies in the world.

“Indra’s legacy is that she’s figured out in a difficult environment that she could run a great company and drive great results and do good at the same time, while having long-lasting impact as a leader and global icon,” said Blair Effron, co-founder of Centerview Partners, an investment bank and advisory firm that’s worked with a range of consumer giants including Pepsi.

As she ponders her next chapter, Nooyi said she’ll possibly take a vacation, in addition to watching the New York Yankees baseball team, and, she quipped, “listen to some music, take a walk in the woods.” She hasn’t thought through potential next steps, but at a time when global progress on promoting more women to CEO positions appears to have stalled, she plans to help develop more talent to ensure that women are represented in the top ranks of corporate America.

“I think people like me, after we leave privileged CEO jobs, I don’t think we can go silent,” she said. “We have to keep fighting the good fight to develop women, to mentor them, to support them, so that we can get more highly qualified women — and there’s plenty of them — into the boardroom, into C suites and into the ultimate CEO job. My job is in fact just beginning once I leave PepsiCo because I can do things now that I was constrained to do when I was CEO of the company.”

The departure of Nooyi drops the number of women CEOs in the S&P 500 to 24, according to data compiled by researcher Catalyst, which advocates for more women in executive positions. The list was last updated July 13. Kathy Warden is scheduled to become CEO of Northrop Grumman Corp. in January, which would bring the total back to 25.

The packaged food industry in particular has witnessed several key female executive exits in the past year. Campbell Soup Co. CEO Denise Morrison abruptly departed in May, while former Mondelez International Inc. CEO Irene Rosenfeld handed over the reins of the Oreo maker in November.

Like many CEOs in a divisive political era, Nooyi has found herself a part of political discussions. She described herself at a conference as a supporter of Hillary Clinton in the 2016 election but congratulated Donald Trump for his victory and was part of his short-lived business advisory council.

During an era when a businessman occupies the White House and corporate leaders including Mark Cuban and Howard Schultz are mentioned as potential presidential candidates, Nooyi said she doesn’t see a future for herself in politics.

Nooyi is leaving the top job at Pepsi at a time when overall soda consumption has dropped to its lowest level in more than 30 years as consumers try to avoid sugary drinks. That’s led Pepsi and competitors to try to diversify into new products perceived as healthier, and to market zero-sugar versions of their soft drinks and retool their diet beverages.

But there have been stumbles. A high-profile bid in 2015 to reformulate Diet Pepsi led to lower sales, and the company revived its old formula a year later. Nooyi told investors last month that Diet Pepsi is performing well again, but Coca-Cola Co. has won more attention this year for its revitalization of Diet Coke.

A ballyhooed 2012 joint venture with German dairy giant Theo Muller to sell yogurt in North America fizzled four years later due to slow sales. Pepsi was rebuffed in 2016 in its attempt to take a major stake in Chobani, the Greek-yogurt maker. The company pushed into the dairy case with the 2011 purchase of a majority stake in Wimm-Bill-Dann Foods OJSC, Russia’s leading branded food-and-beverage company.

The company’s Frito-Lay unit remains a snacking powerhouse with brands like Tostitos, Doritos and Lay’s chips dominating grocery-store shelves. Big Food companies have lost billions in revenue in recent years as consumers gravitate to more natural products made by smaller upstarts. But Frito-Lay, while not immune to the shifts, has defended its turf, controlling about two-thirds of the U.S. salty-snack market.

Nooyi has also worked to appeal to modern snacks. Frito-Lay has versions of 11 core chip brands without artificial ingredients, aiming to break out of the traditional snack aisle and get into organic grocery stores. Products such as Sabra hummus and guacamole, Naked cold-press juices and Lipton Pure Leaf tea have bolstered results.

During Nooyi’s time leading the company, Pepsi shares rose about 80 percent, while rival Coca-Cola has more then doubled, as has the S&P 500.

Pepsi shares rose 0.7 percent as of 8:18 a.m. in New York on Monday before the start of regular trading.

Nooyi said under her tenure Pepsi considered and passed on large transactions that could have dramatically altered the company. “Everybody says, ‘Hey, do a transformative deal, it will put you in the neon lights,’” she said. “The issue is that we’ve got to derive value from large transformative deals. And we didn’t find one that would create shareholder value.”

Now, Laguarta prepares to take the reins at a tricky time for the company, with pressure ramping up to ignite growth, particularly in the North American beverage unit.

“Ramon is the product of a responsible development and succession plan,” Nooyi said. “He’s had a birds-eye view of the whole company and what kind of disruptive moves we would have to make, disruptive productivity, to take us to this next era of growth for this company.” 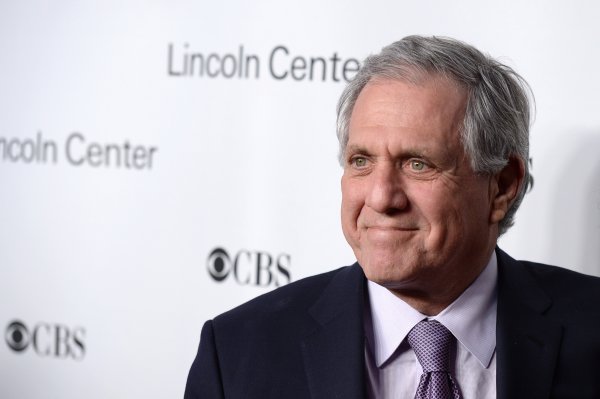 CBS Board to Meet About Moonves Allegations
Next Up: Editor's Pick