It has been 20 years since Americans first became familiar with the names Monica Lewinsky and Kenneth Starr. In Donald Trump–infused hindsight, the national drama that emerged from an Oval Office affair, a blue dress and “I did not have sexual relations with that woman” feels like a quaint political scandal. But little else has so fundamentally shaped modern American politics for the worse. We are still feeling the reverberations.

In many ways, the affair built the modern GOP. There’s no question that the hounding of the Clinton family was motivated primarily by political expediency and a ruthless right-wing quest for power at all costs — a stunning dominance-before-country shift that set the stage for the eventual party takeover by a strongman leader, currently deep in the project of undoing American democratic norms. That Brett Kavanaugh was an instrumental hand in this initial ruthless power-grab and is now President Donald Trump’s pick to replace Justice Anthony Kennedy on the U.S. Supreme Court is evidence enough that none of the bad actors from the Clinton-era GOP have paid any price. In fact, it’s been the opposite: Those who abused their power to try to delegitimize a president and publicly humiliate a young woman saw their stars rise in right-wing politics.

But while the right has magnified the worst impulses it displayed, the left has been reassessing our own defenses of President Bill Clinton — or at least those of our foremothers. (Like many of today’s feminists, I was too young to vote when the Starr Report was published). Surely, Clinton did not deserve impeachment for oral sex (or lying about oral sex). But neither, in hindsight, do feminists see his actions as simply private sexual behavior, beyond the fair purview of a prying public. We are more likely to assess them through the lens of male power; the #MeToo movement has rightly demanded this assessment be even sharper. This is also a convenient cudgel for the right, who demand Democratic politicians be held to the most stringent of feminist standards while they cast their ballots for a motley crew of accused sexual assailants, accused child molesters and known misogynists.

Viewed through the rearview mirror of two decades of expanding and contracting feminism, Clinton’s affair and the public treatment of Lewinsky that followed look worse the farther away we get. There is the simple fact that Clinton was the most powerful man in the world, engaging in one-way sexual relations with an intern (though he received oral sex on a number of occasions, according to Lewinsky’s grand jury testimony, he never reciprocated). Was the affair consensual? Lewinsky testified that it was, enthusiastically. But even her own words belie an enormous gap in power and sophistication between her and her boss.

In her first testimony, on Aug. 6, 1998, Lewinsky describes Clinton as “sunshine,” although they argued when “I was getting my Christmas kiss” and he kept his eyes open, looking out. She talks about the notes and cards she sent him: “It could be a funny card that I saw or a Halloween card. If I was angry, it could be an angry letter. If I was missing him, it was a missing him letter.” The angry letters, she said, typically stemmed from work issues or “him not paying enough attention to me.” He never wrote her back.

Lewinsky’s descriptions of the relationship come across as shockingly naïve in a post–Sex & the City, Tinder-fied world (the show debuted just two months before her testimony; finding dates by swiping right was still more than a decade away). The national conversation about Lewinsky was similarly retro. Twenty years ago, she was written about as though she were either an equal partner in an affair, a vampy bimbo or both. In reality, she was a 22-year-old who thought she was in love with her powerful, charismatic boss. She was a 22-year-old in an era where sexual harassment was certainly in the lexicon, but not understood as the (usually male) exploitation of power differentials to extract sexual access (usually from subordinate women). She was a 22-year-old before Twitter, when a young woman could plausibly wonder longingly and out loud to a presidential advisor whether the President would always be married to the First Lady, and refer to that same advisor as a “gentleman” primarily because he paid for her egg-white omelet.

Reading her grand jury testimony 20 years later, it’s striking how raw and romantic she is, and how thoroughly unselfconscious she is about it. Today, that kind of vulnerability and naiveté would read as something between weakness and stupidity: Really, you gave your boss a bunch of oral sex because you loved him? This is probably because we are meaner, and also more acutely aware of the salience of power differentials. Women (and men) today are just as capable of falling hopelessly, dumbly in love, including with our superiors. But we know better than to put it in such girlish terms, especially for public consumption. And now, we have a more sophisticated vocabulary to pull apart the complications of sex, power and work. We know how to assess and reassess our actions, and understand where our motivations are less about unvarnished romance and more about awe or admiration, or even the eroticism of proximity to power.

If a Monica Lewinsky emerged today, she would be a discomfiting figure, both defended by feminists for the perceived exploitation by her boss and distrusted because of her seeming inability to posture and deflect about her sexual and romantic life. When cynicism is increasingly read as shorthand for intelligence and honesty, the guileless among us are suspect. In the ‘90s, Lewinsky experienced the worst of this transition into today’s world: She was victim to this growing cultural cynicism, but not yet savvy enough to know she should shape her own relationship narrative accordingly.

In some ways, the world has changed for the better — at least from the feminist side of things and at least for young women. We are collectively more skeptical of powerful men who do things like extract oral sex from 20-something interns. We expect women to be a bit more clear-eyed and to see the power dynamics in front of their faces instead of deluding themselves with fairytales about love and romance when the relationship is about the thrill of illicit sex.

On the right, though, the lessons learned only grow increasingly toxic: That if you keep throwing out accusations, something will stick eventually; that the rules of the game can be changed at any time if it benefits your team; that private citizens can be collateral damage for a political crusade.

It was Monica Lewinsky who paid the steepest price for this political charade. The most powerful man in the world needed adoration so pathologically that he sought it from an intern, content to let her believe sex was love so long as she showered approximations of both upon him. But it was the name of the 22-year-old who thought she was in love that became synonymous with a sordid affair. Two decades later, Clinton’s reputation is a touch tarnished, but Lewinsky’s has never recovered. And the right-wing architects of the most sordid bits continue to enjoy power and privilege — and maybe a Supreme Court seat. 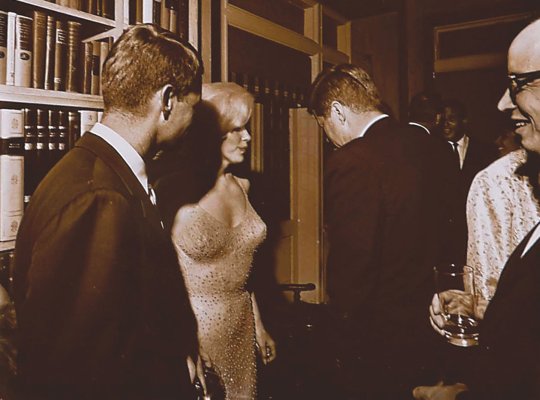 The Story Behind the Only Known Photo of Marilyn Monroe and John F. Kennedy Together
Next Up: Editor's Pick