All episodes from five out of the six podcasts produced by Jones’ company InfoWars were removed by Apple from their iTunes and Podcast platforms on Sunday, including the Alex Jones Show and War Room. Only one InfoWars podcast, Real News With David Knight, is still available on Apple.

“Apple does not tolerate hate speech, and we have clear guidelines that creators and developers must follow to ensure we provide a safe environment for all of our users,” a company spokesperson told BuzzFeed News. Apple did not immediately respond to a request for comment from TIME.

Facebook followed suit on Monday, removing the InfoWars page along with three other offshoot pages for “repeated violations of Community Standards.”

“This account has been terminated for violating YouTube’s Community Guidelines,” a notice says on YouTube’s link that formerly led to Jones’ channel.

A YouTube spokesperson said in a statement to TIME that when “users violate these policies repeatedly, like our policies against hate speech and harassment or our terms prohibiting circumvention of our enforcement measures, we terminate their accounts.”

MailChimp joined the list of tech giants casting Jones out on Tuesday. A spokesperson for the email service provider confirmed to TIME that Infowars’ accounts were terminated for violating its Terms of Services.

“MailChimp doesn’t generally comment on individual users or accounts, but we’ll make an exception today,” a statement from a company spokesperson read. “MailChimp notified Infowars that their accounts have been terminated for violating our Terms of Service, which make it clear that we don’t allow people to use our platform to disseminate hateful content.”

Jones has not directly addressed the elimination of his content on these platforms, but did retweet a few people, including InfoWars employee Paul Joseph Watson, who criticized the move as an attack on free speech.

“This sets a chilling precedent for free speech,” Watson tweeted. “To all other conservative news outlets – you are next. The great censorship purge has truly begun.”

Some applauded the companies including Sleeping Giants, a lobbying group attempting to get big tech companies to remove hateful content. “Tomorrow, Alex Jones will scream about his ban from iTunes being political. There are plenty of conservative & liberal podcasts that don’t harass the parents of children killed at Sandy Hook or Las Vegas shooting victims. This was not about right or left, but right and wrong,” the group tweeted.

Jones is currently being sued by the parents of Sandy Hook victims for claiming the 2012 mass school shooting was a hoax. 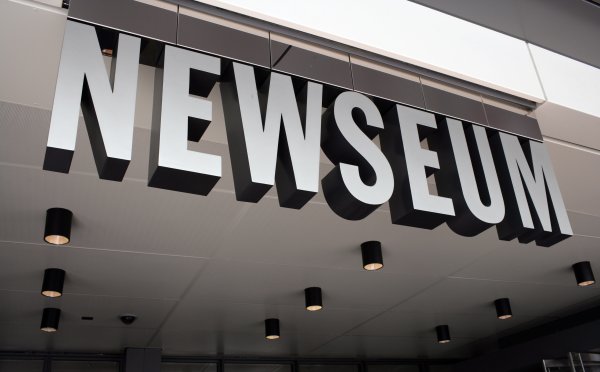 The Newseum Is No Longer Selling 'Fake News' Shirts
Next Up: Editor's Pick