Zephyr Teachout never planned to run for Attorney General of New York while pregnant. The 46-year-old activist and professor isn’t new to politics — she mounted a remarkably effective, although ultimately unsuccessful, challenge to Gov. Andrew Cuomo in 2014 — but she expected to remain in her teaching position at Fordham University School of Law until the birth of her first child. This May, however, right after her first trimester ended, the Attorney General Eric Schneiderman resigned amid allegations of physical abuse from four women. Suddenly, there was an opportunity for a job that Teachout not only wanted, but one that she believed that she was best suited for.

So less than a month after Schneiderman resigned, Teachout announced she was running to for New York Attorney General, pointedly in front of Trump Tower on Fifth Avenue. Her child is due in October, one month after the primary and smack dab in the middle of the potential general election campaign. If she wins, Teachout will take office in January.

Teachout, who in 2014 published a book, Corruption in America: From Benjamin Franklin’s Snuff Box to Citizens United, on misconduct in the U.S. government, has become known as a champion of the progressive movement since her gubernatorial run against Cuomo four years ago. She’s also part of a group of attorneys who filed a suit against President Donald Trump soon after he won the presidential election on the grounds that he violated the emoluments clause of the Constitution. With Trump’s real estate empire and foundation headquartered in New York, whoever becomes New York’s Attorney General next will have jurisdiction to investigation Trump’s many businesses. (Schneiderman filed over 100 legal actions against the Trump administration during his tenure.)

Polling shows that Teachout’s campaign may be something of a long shot. She is facing three other candidates in the race: Letitia James, New York City’s public advocate, Leecia Eve, an attorney and former Hillary Clinton aide, and U.S. Rep. Sean Patrick Maloney. Although Teachout has received endorsements from other high-profile progressives in New York, such as Alexandria Ocasio-Cortez, who is running for Congress, and Cynthia Nixon, who is running against Cuomo for governor, the Democratic party leadership in the state has largely backed James. And according to a Quinnipiac University poll released last month, 42% of voters are undecided about who they will support in the Democratic primary for attorney general. James has the lead with 26% of support, and Teachout is third with 12% of support behind Maloney who has 15% of support.

Teachout shrugs off the idea that her decision to run while pregnant is any more remarkable than other female candidacies. Not only wouldn’t it be news if she were a man running with a pregnant wife, she says, but pregnant women work far more physically taxing jobs than the one she’s campaigning for. “Women are working in McDonald’s pregnant,” she says. “Fast food workers who don’t have contracts, who don’t get a lot of time off.” She believes any heightened focus on her campaign because of her pregnancy conveys sense of a lingering societal bias toward women on the campaign trail. “I think it shows, for so long, an unspoken rule that people don’t run while pregnant,” she says. “Which certainly has been broken [before], but not very often.”

The Center for American Women and Politics, which collects data on female candidates, does not have information available about the exact number of women who have run for public office while pregnant. Debbie Walsh, the Director of CAWP, can only recall two who have run for statewide office in recent history: Judi Dutcher, who ran for state auditor in Minnesota while she was pregnant in 1994, and Jane Swift, who ran for lieutenant governor of Massachusetts in 1998. (Both won.) Both women marvel that in the two decades since their candidacies, running for office while pregnant still seems to be an anomaly. “I was hoping by now it would be somewhat normalized,” says Dutcher. Swift adds, “I do think there has been some progress… But clearly because we’re having this conversation it’s not enough.”

While Teachout did not reach out out to either Dutcher or Swift, she did contact New York Sen. Kirsten Gillibrand, who gave birth to her son while serving in Congress in 2008. Gillibrand, Teachout says, told her to take care of her health, eat the non-sweetened version of whatever foods she wanted and make sure she gets her sleep. So far, Teachout feels as if she’s heeded that advice. Overall, she says she’s found her pregnancy a source of “inspiration and power” on the trail. She has also discovered that multiple women have felt a kinship with her because of it. “They see me running pregnant and talk [to me] about their own experiences [expecting],” she says.

Teachout addresses her pregnancy without hesitation, but mostly only when she is asked about it directly. She certainly doesn’t hide the fact that she’s expecting — she’s very proud of it — but it’s clear she doesn’t want it overshadowing the ideas of her platform. “I have always wanted to run for Attorney General, and I always wanted to have a baby, but I did not think I would be doing them at the same time,” she tells voters in a new digital ad.

Her pregnancy isn’t mentioned on her website, however, and she’s only mentioned it on her social media feeds a handful of times, often in regards to policy. (“As your pregnant candidate for Attorney General, you know I will be a warrior for women facing pregnancy discrimination when i’m in office!” she tweeted in June after the New York Times came out with a story about pregnancy discrimination in the workplace.)

Both Dutcher and Swift, along with Walsh, say that approach makes total sense — but the fact that her candidacy and pregnancy are simultaneously scrutinized shows that Teachout is still breaking new ground. “There’s not a lot of how to do this when you’re pregnant out there, [not] a whole lot of role models [or] a handbook that says here are the things you should do when you’re pregnant and running for office,” says Walsh. “It’s still a pretty rare thing.” 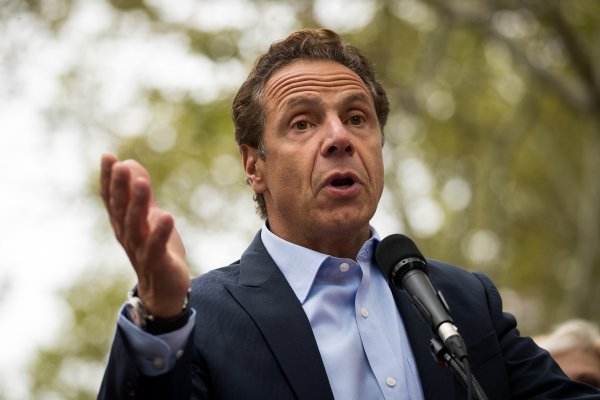 Trump Slams Cuomo for Saying America 'Was Never That Great'
Next Up: Editor's Pick