The idea of conversion therapy is so inhumane that it could be some alien race’s idea of a sick joke. Bad enough that it actually exists; the fact that it’s generally put to use out of religious convictions elevates it to a sin of supreme arrogance. People who won’t come right out and say, “We don’t like you the way you are” feel perfectly comfortable saying, “God doesn’t like you the way you are”—as if they’re in any position to know.

God probably likes The Miseducation of Cameron Post, or at least the idea of it: Chloë Grace Moretz plays Cameron, a high-schooler growing up in the early 1990s somewhere in Bible Belt America. Cameron does normal high-school things, like going on a double date to the school prom. But it also appears that she’s in love with her closest friend, Coley (Quinn Shepard): The movie’s early moments telegraph the tender, exploratory carnality of their relationship. But when they sneak away from the dance and get caught together in the backseat of a car, it’s Cameron, and not her prom-queen friend Coley, who pays the price: She’s sent off to a special school called God’s Promise, run by an “ex-gay,” Reverend Rick (John Gallagher Jr.), and his supremely uptight sister Lydia (Jennifer Ehle). (“She de-gayed him,” is the whispered lore swirling around the brother-sister duo.) Ostensibly, this is a place where Cameron’s head—and everything else—can be put right.

Conversion therapy was a hot-button issue in the 1990s; it’s less talked about today, though the concept certainly hasn’t gone away. The Miseducation of Cameron Post—directed by Desiree Akhavan (who previously made the 2014 feature Appropriate Behavior) and adapted from Emily M. Danforth’s novel—is set squarely in its time. Yet it doesn’t feel like a period piece. You stop thinking of the God’s Promise detainees as misunderstood gay kids and more as misunderstood kids, period: Most of them feel pretty comfortable in their own skin; it’s the cloistered world around them that fails to accept them as they are.

That actually presents some story-structure problems: The Miseducation of Cameron Post is a fairly tame picture. A horrific off-camera event introduces some tension, but its impact feels indistinct and diffuse rather than wrenching. Still, these kids get to you. Moretz plays Cameron as a young woman who knows her own mind, refusing to let it be reshaped—but she also suggests how long-term defensiveness can cause a kind of internal bruising that doesn’t always show. Sasha Lane and Forrest Goodluck are terrific as the two fellow God’s Promise inmates who become her friends. Lane’s character, Jane Fonda—the name could be an affectation, or maybe not—is a firecracker who stashes weed in her prosthetic leg. Goodluck’s Adam Red Eagle is a marvelous deadpan comedian who takes everything in stride, silently defying Lydia when she harangues him for failing to keep his gorgeous mane of hair out of his face. One day, having had enough, she finally shaves it off: His stubbly head only makes the mutinous glare in his eyes more evident. The Miseducation of Cameron Post may not hit as hard as it should. But it at least suggests that the only real losers in life are those who presume to read God’s mind. 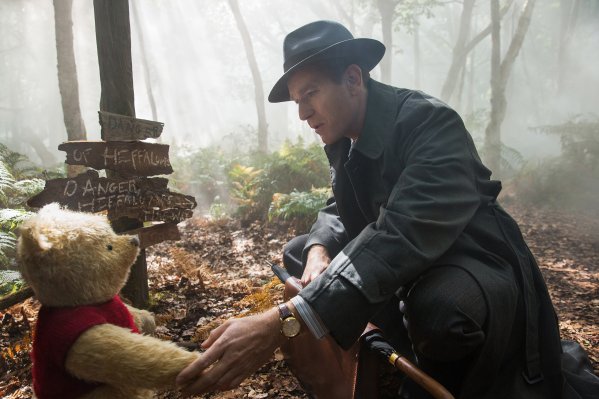 Christopher Robin Is as Much a Movie For Adults as It Is For Kids
Next Up: Editor's Pick