A neighborhood in Boise, ID became the scene of an unexpected goat takeover this week, as “about 100” goats descended on the lawns and gardens of a residential area — to the surprise of homeowners waking up to discover their new neighbors snacking on their front yards.

“They are going house to house eating everything in sight. Nobody has a clue where they came from…” tweeted out local news reporter Joe Parris on Friday morning. The goats came in all shapes, colors and sizes and were snapped meandering around sidewalks and even making a few attempts to climb trees.

The event he coined “Goat-a-Palooza 2018” got many scratching their heads trying to figure out just where the goats had come from. But in the end, the mystery was solved as the animals were herded together and returned to their ostensible home.

“Party is over ‘kids’!” Parris continued to update. “Loose goats have been cornered and loaded back onto a truck owned by ‘We Rent Goats.'” According to local news, the goats had been stationed on nearby land where they were let loose grazing; herds of goats are often used as a natural form of fire suppression and weed clearing. But somehow this particular group got away from their station and decided the neighborhood’s nice green lawns were more to their taste.

Parris’s goat-related puns were pretty good, but his followers had plenty to add.

But the “great escape” was not meant to last. Until next time, goats. 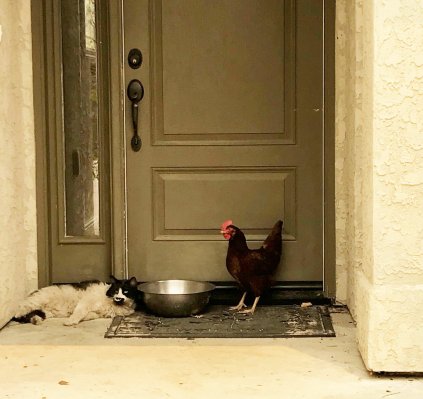 This Unlikely Pair Was Found Huddling Together After They Survived a California Wildfire
Next Up: Editor's Pick