A summer heatwave in the Arctic circle has claimed a victim in Sweden’s highest point, a glacier on Kebnekaise mountain in the north of the country.

Melting fueled by the heat has caused the peak to lose 13 feet in height. Scientists say this means another peak on the same mountain – one made of rock, not ice – is now higher than the glacier’s tip.

Just a month ago, the glacier reached 6,893 feet above sea level. At the latest measurement on Tuesday, it was just 6,879 feet high – less than eight inches higher than the rocky peak. Scientists say that based on the melt-rate so far this summer, it is now no longer the highest point in the country.

“We know that it has melted because it is very hot,” Professor Gunhild Rosqvist, a climate scientist working near the mountain, told the New York Times. “We are going to measure again later this summer when the melting stops. In a month, we’ll know how bad it is.”

Northern Europe has been sweltering in a heatwave that scientists fear is a result of climate change. Banak in Norway, over 350 miles into the Arctic Circle, reached 90 degrees on Monday.

“Climate change in the Arctic is not just a local problem – it’s a global problem,” the World Wildlife Foundation said. “The feedbacks from the Arctic are increasing global sea levels, they are predicted to change global climate and precipitation patterns, and the effects of climate change on Arctic species are likely to be felt globally.”

Most Popular on TIME
1
Third Wave of COVID-19 in U.S. Is the Worst
2
Senate Votes to Advance Barrett to Supreme Court
3
Your Guide to Vote by Mail Deadlines in Every State 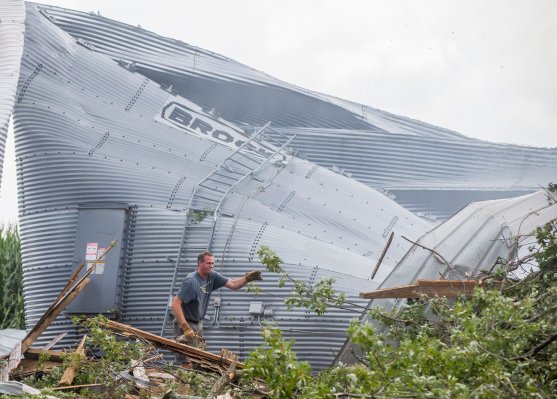 Midwest Derecho Caused $7.5 Billion in Damage
Next Up: Editor's Pick