Despite Progress, Black Women Are Paid Only 62.5% of What Men Make. Here's How to Fix That

In 1985, the Queen of Soul, Aretha Franklin, and the British pop group the Eurythmics, teamed-up to record one of my all-time favorite songs, a stirring female empowerment anthem called “Sisters Are Doin’ It For Themselves.” The song was about women — tired of waiting on men to do the right thing — taking matters into their own hands to achieve equality.

“Now this is a song to celebrate,

The conscious liberation of the female state!

Woman to woman, We’re singin’ with you. We got doctors, lawyers, politicians too.”

In the 33 years since the song was released, women, especially Black females, have indeed been doin’ it for themselves. According to “The Status of Black Women in the United States,” Black women have been turning out for elections and voting at unprecedented rates; they’ve also made significant strides in earning undergraduate and advanced degrees and have been succeeding brilliantly in opening their own businesses. And yet for all the progress, there’s one area where black women have been unable to move the needle very much, and that’s in getting paid fairly for their work.

According to a 2016 study by the Institute for Women’s Policy Research, black women are paid only 62.5% of what men make. It’s because of this gaping disparity that Equal Pay Day for African–American women won’t occur until August 7 this year. It’s the date at which Black women who worked full-time through all of 2017, and this far into 2018, will earn the same amount of money as men did in 2017. Or to put it another way, Black women must work almost 20 months to earn what men earn in 12.

If you’re wondering how this obscene inequality got baked into American society, the fact is it’s pretty much always been there. In 1776, Abigail Adams is said to have pleaded with her husband to “remember the ladies” while he was helping draft the Constitution, but John Adams was dismissive of his wife’s idea, saying men “know better than to repeal our masculine systems.” Women have been fighting for the right to be treated as equals ever since, including the right to be paid the same as men for similar work.

It would be 187 years before any federal legislation was passed to address wage inequality. In 1963, John F. Kennedy signed into law the Equal Pay Act. The law made it illegal to pay men and women working different salaries for similar work. “It is a first step,” Kennedy said during the signing. “It affirms our determination that when women enter the labor force they will find equality in their pay envelopes.” But when Time magazine assessed the act’s impact in 1974, the wage gap at the time — women earned 60 cents on the dollar — was the same as it was when Kennedy signed the law over a decade earlier.

In 1972, the Equal Rights Amendment, which was designed to guarantee equal legal rights for all American citizens regardless of sex, seemed on the verge of becoming a reality when it was approved by the Senate and House. But then as now, there was too much opposition on the state level for the amendment to be ratified.

In 2009, the Lilly Ledbetter Fair Pay Act was signed into law, but that too has failed to significantly close the wage gap for women. In fact, a recent study showed that absent any legislative action, women won’t achieve income parity with men until 2058! The picture is even bleaker for Hispanic women, who make only 54 cents for every dollar men make.

Given all the implications for struggling single mothers, women in poverty and just the sheer unfairness of income inequality, you’d think the wage gap issue would be a major focus of Democratic Party Leaders. But it seems to be something they only mention in passing every four years at conventions.

So, where does that leave us? What can we do? Well, as Black females showed in 2017, when women are organized, focused and determined, we are a force to be reckoned with. Two stunning electoral victories last year in the South — an historically hostile territory for Democrats — underscored the power of black women voters. In Virginia’s Governor’s race, 91% of Black women cast their votes for Democrat Ralph Northam, propelling him to victory over Republican Ed Gillespie. In deep red Alabama, an astounding 98% of Black women voted for former U.S. Attorney Doug Jones over Republican Roy Moore, making him the first Democrat in 25 years to hold a U.S. Senate seat in the state.

But Black women can’t do it all alone. We need our White, Asian and Hispanic sisters to join us as allies, match our intensity and create a massive voting block that’s too powerful to be ignored. It’s time for the sisters to do it for themselves. Here’s what we can do:

Organize, organize and organize! Since the 2017 elections, when the power of the Black female vote became evident to the world, many political groups have sprung up to leverage this newly found clout. You can do your part by donating to or becoming an active participant in one of these organizations.

Contact your representatives. Nothing gets a senator’s or congressperson’s attention like a passionate, active and vocal constituency. By flooding your representatives phone lines and mail boxes with messages about just how incensed you are about unequal pay, she or he will be sure to get the point.

It’s time for ALL women to use the influence we’ve earned, and demand party leaders act on the issues important to us, or else the next time they need our support, they may find us unavailable and uninspired. 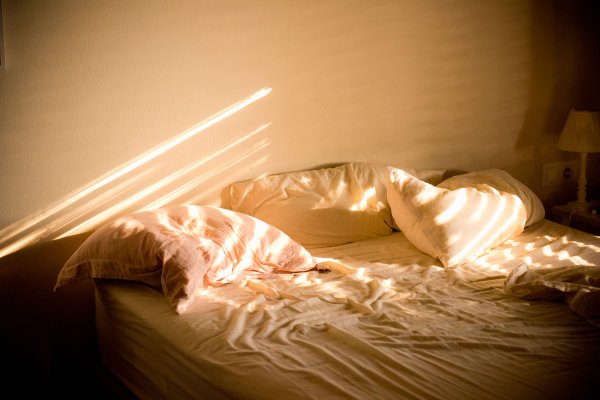 How Sleep Affects Your Relationships, According to Science
Next Up: Editor's Pick