The Millennial Teetotalers Upending the Stereotype of Boozy Britain

On a sunny Saturday in late July, more than 1,500 people descended on trendy east London for an afternoon of heavy drinking. In between gin and tonic pairing sessions, beer tastings and cocktail masterclasses, students, hipsters and young professionals lounged around on deep-set deckchairs, making the most of the unusually warm weather. At one point during the event, a handful of alternative-looking 20-somethings danced to minimal techno beats laid down by a live DJ. But despite the drinks on offer, not a single person there was drunk. There would be zero hangovers the morning after this festival — a boozeless bonanza known as the Mindful Drinking Festival.

The event reflects a growing trend around the world of younger people choosing not to drink alcohol. It’s most evident in developed and Western countries; in Australia, alcohol consumption recently reached its lowest point since the early 1960s, the decline driven almost entirely by reductions in youth drinking. In Germany, teen drinking has dropped by half over the past 30 years. And although drinking data varies widely from state to state in the U.S., research by the Institute of Alcohol Studies suggests that young people are consuming less alcohol than previous generations did at the same age.

But this trend of sobriety is especially pronounced in the United Kingdom, perhaps surprising given the country’s hard-drinking reputation. Today’s millennials, born roughly between 1980 and 1995, are sneeringly described by the British media as Generation Sensible. Contrary to the national stereotype of pub-going, vodka-downing, beer-obsessed Brits, those aged 16 to 24 years in the U.K. are less likely to drink than any other age group and teetotalism is on the rise. Britain’s thirst for booze is seemingly running dry.

People gather outside a bar in Shoreditch, on July 28, 2018 in London, England.
Jack Taylor—Getty Images

There are several factors that help explain why young people are drinking less, from greater financial insecurity to the influence of social media, but an ever increasing level of health consciousness, both mental and physical, is a major reason. “When I was a teenager in the 90s, there was very much this beer-y, boozy culture, where Kate Moss, Carrie Bradshaw and Bridget Jones were the cultural icons,” says Rosamund Dean, a magazine editor and author of Mindful Drinking: How Cutting Down Can Change Your Life. “These days, it’s the wellness movement that is the aspiration thing that everyone wants to be part of.”

Indeed, many of the millennial teetotallers TIME spoke to had stopped drinking due to concerns about their health. Ally Sinyard, a 28-year-old content editor from Kent, south east England, gave up liquor in January 2016. “When I moved to London I started going to parties where there’d be free bars and I got into the habit of getting blind drunk,” she tells TIME. “I’d repeatedly wake up feeling emotionally whacked until one day I thought ‘I’m done, it’s not worth it’.”

Sinyard was diagnosed with borderline personality disorder when she was 22, and says she soon realized that her drinking was impacting her mental health. Since going teetotal, she claims to feel more carefree and has thrown herself into sport; she’s now on the British team for Savate — a type of French kickboxing. “British drinking culture has traditionally meant that any emotion, whether you’re happy, sad or bored, should be celebrated with an alcoholic drink,” Sinyard says. “Now things are changing and I think it’s to do with the rise of mindfulness; people are more aware of what they are putting into their bodies and how it will make them feel.”

Mental illness was also why 27-year-old Rex Carter from Berkshire, south east England, gave up drinking two years ago. After experiencing depression, Carter decided to avoid alcohol, but struggled to find a sophisticated alternative when out with friends. “I still went out to pubs, bars and restaurants, but I got bored of having a fizzy soft drink,” he says.

Carter decided to take matters into his own hands, and after 51 iterations he invented the Berkshire Blend, a premium alcohol, allergen and sugar-free spirit alternative. “I want to redefine what it means to go out for a drink,” he told TIME at the Mindful Drinking Festival, where he was showcasing his product. Five percent of profits from Berkshire Blend, on sale for £15.99 ($21), go to the mental health charity Mind, paying homage to the drink’s origins. When mixed with tonic, ice and a squeeze of lime, the Berkshire Blend has a tangy cucumber, citrus and spice taste. It’s comparable to a G&T, but without the buzz — or the inevitable morning-after hangover.

Economic reasons are also playing a part in the decline of Britain’s boozers. A report in the U.K.’s Financial Times newspaper in February 2018 found that millennials in their twenties and thirties are earning barely more than previous Generation X-ers were at the same age. With rising housing prices, stagnant wages and less disposable income than their baby boomer parents had at their age, it’s not surprising that British millennials are desperate to cut costs where they can. “Alcohol affordability is one of the main drivers of consumption and has declined in recent years with prices rising and disposable incomes falling. This is likely to have significantly influenced underage drinking,” concludes the Institute of Alcohol Studies’ 2016 Youthful Abandon report.

In the interviews TIME conducted with teetotal millennials, the expense of drinking repeatedly came up as a reason for cutting out alcohol entirely. “I could easily spend £80 ($105) on a night out on alcohol alone,” says one 27-year-old man who did not want to be named, who gave up drinking six years ago after a stint in rehab. “Now that money goes on other nice things like holidays and dinners out. It feels more justified.”

Politics student Julia Pearson, 21, echoes these sentiments. “On a night out, I’ll usually have some tap water or a lemonade or Diet Coke if I’m feeling exciting,” she says. “I’ve saved loads of money, which is particularly good as I’m a student.” Pearson is part of her university’s Alternative Social Group for Non-Drinkers and Non-Clubbers, a group that has nearly 1,000 members. “They run non-alcohol-related socials like laser tag or bowling or just having a coffee,” she says. “It’s a big community for people who don’t drink.”

The backlash against booze has social as well as economic causes. “Often when you get a very heavy-drinking 20-to-30-year period, it’s followed by a different attitude towards alcohol,” says Dr James Nicholls, director of research and policy development at Alcohol Research U.K. “The things you do when you’re young are often to distinguish yourself from your parents, so if your parents drank heavily when they were young and perhaps still do, then that might not be appealing to you.” This was partly the case for teetotaller Pearson. “My parents come from a binge-drinking generation and my dad is an alcoholic,” she says. “Seeing them made me never want to start drinking myself.” Indeed, recorded U.K. alcohol consumption peaked in 2004, when 29 million people aged 16 years and over reported that they had drunk alcohol the week before, and has been on a downward trend since then.

Social media also plays a part in the waning popularity of drinking to excess. “I don’t drink because I don’t want to ruin my life by doing something stupid and it ending up on the internet for the rest of time,” says Hengjian Jia, a 19-year-old student from Devon, southern England. “Collapsing on a pavement somewhere is not a very Insta-ready look,” agrees Nicholls.

Parenting styles and effective public health campaigning are also believed to have contributed to today’s teetotal culture, as well as increased regulation around drinks sales to young people; a YouGov poll commissioned by the industry-funded Portman Group found that the most commonly cited reason that British parents gave for the decline in underage drinking was that “shops and pubs were being stricter.”

While positive from a public health point of view, this anti-alcohol trend is not good news for liquor providers. “There’s a huge amount of marketing going on to capture the youth market, to try and ensure that it doesn’t just drift away entirely,” Nicholls says. Leaders of the alcohol industry are now attempting to make inroads into the burgeoning non-alcoholic drinks market. In March 2017, Heineken announced the release of its 69 calorie 0.0 alcohol-free lager, made from water, malted barley, hops and yeast. The company has since attributed boosted profits to strong demand for its light and non-alcoholic beers. “We’re confident that the alcohol-free category will continue to gain momentum as consumers become more open towards it,” says Heineken’s master brewer Willem van Waesberghe.

In the U.K., sales of low and non-alcoholic beer grew by 20.5% over the 12 months to July 2017, and non-alcoholic spirits are on the rise too. “Socializing should be about inclusivity not segregation, which fits in perfectly with the millennial mindset,” says Ben Branson, the founder of the U.K.-based Seedlip, a distilled non-alcoholic spirits brand made from herbs, spices, peels and barks. “Therefore we are focusing on creating moments that everyone can get involved in, whether they drink alcohol or not.” In 2016, Seedlip received investment from Diageo, the first time the world’s largest distiller had invested in a non-alcoholic drinks company.

It’s not just millennials who are benefitting from the growth of the alcohol-free market. Pregnant women, recovering addicts, people taking medication that isn’t compatible with alcohol and those who abstain for religious reasons are just a handful of the groups that stand to be more visible thanks to a movement spearheaded by the young. For Sinyard, this is a legacy she thinks her fellow millennials should be proud of. “I like to think one day Generation Sensible will be remembered positively, for helping people finding fulfillment from more authentic or natural experiences,” she says. “It’s sounds cheesy, but you really can get high on life alone.” 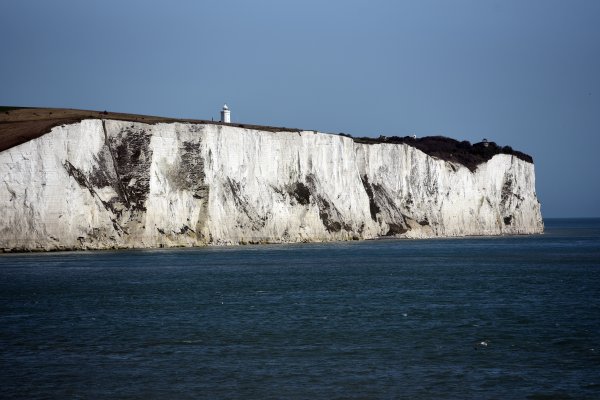 Britain Is Preparing For a ‘No Deal’ Brexit. Here’s What That Means
Next Up: Editor's Pick