The 3D-printed firearms, which are made mostly of plastic and can be constructed using blueprints available online, have sparked concern among gun control advocates that they could be undetectable by traditional means like metal detectors.

“TSA has determined that these items can — and have been — detected at the security checkpoint,” spokesperson Michelle Negron said in a statement to TIME. “Our officers are trained to look for and detect threats, including artfully concealed weapons, and through use of sophisticated technology, including Advanced Imaging Technology, can detect non-metallic items concealed on a passenger.”

Travelers carrying 3D-printed firearms at security checkpoints will be referred to local law enforcement and face civil penalties by the administration, the agency said.

Concern over 3D-printed guns comes amid a legal battle over online access to plans to build the firearms. On Tuesday, a federal judge in Seattle granted a temporary restraining order to stop the posting of blueprints that would have legally allowed Americans to make 3D-printed guns in their own homes starting Wednesday.

Gun control advocates and Democrats in Congress have voiced their opposition to the idea of legal 3D-printed guns, saying they could lead to the spread of untraceable firearms in the U.S. President Trump weighed in on the matter on Tuesday in a tweet: “I am looking into 3-D Plastic Guns being sold to the public. Already spoke to NRA, doesn’t seem to make much sense!”

Legal or not, people have tried to get 3D-printed firearms through security checkpoints at airports multiple times since 2016. The TSA found a 3D-printed realistic replica revolver and five rounds of .22-caliber ammunition at the Reno/Tahoe International airport in August 2016. 3D-printed firearm components have twice been found at checkpoints at the McCarran International Airport in Las Vegas – in January 2018 and December 2016. In May 2017, a 3D-printed replica firearm was found in a carry-on bag at the Manchester-Boston Regional airport.

3D-printed guns are not allowed on aircraft, but can be legally transported in checked baggage. 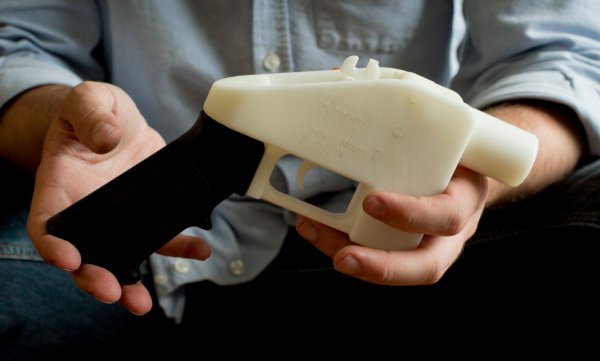 Why the Legal Battle Over 3D-Printed Guns May Prove Futile
Next Up: Editor's Pick