Why Trump Imposed Sanctions on a Key NATO Ally

Over the course of 18 months, President Donald Trump has shown he’s willing to use American economic might in ways his predecessors were too cautious — or too prudent — to risk. On Wednesday, he went further than many might have imagined he ever would.

In response to the imprisonment of Andrew Brunson, an American pastor who has been held for nearly two years on espionage and terror-related charges, the Trump Administration imposed financial sanctions on two senior members of Turkey’s government, freezing the officials’ assets in the United States, prohibiting them from traveling to the U.S., and preventing from engaging in any financial transactions with American citizens.

The Administration’s action is an unprecedented escalation against Turkey, a NATO ally that hosts America’s largest foreign stockpile of nuclear weapons. It also marks the latest attempt by Trump to use the United States predominant role in the international financial system to get what he wants from another nation — including a long-standing ally.

Read More: Trump Has Made Iran Public Enemy No.1. How Far Will He Go?

The decision to use sanctions is a tactic that he’s employed before. But until now, the Trump Administration has employed sweeping sanctions against foreign adversaries, such as North Korea and Iran, to bleed their economies dry and force them to the negotiating table.

In this case, the Treasury Department showed greater creativity in the use of financial sanctions to target just two senior officials — one of whom said on Twitter he had no U.S. holdings — in order to send a clear message to a foreign ally.

“The sanctions target just two cabinet of the Erdogan government while leaving the rest of the Turkish economy intact,” said Jonathan Schanzer, a former Treasury Department official who’s now senior vice president at the Foundation for Defense of Democracies think tank. “These are two sniper bullets that have been fired from the U.S. financial system. Now, granted, sanctions at this level are still significant enough to spook financial markets, cause a drop in the value of the lira, and some other things. But it’s not going to have a cratering impact on the Turkish economy.”

Indeed, the Turkish currency slid to a record low after the White House announced the sanctions. The lira fell 1.6%, or to 5.01 against the U.S. dollar.

The move also generated a backlash from the government in Ankara. The Turkish Foreign Ministry vowed to respond to the actions taken. “There is no doubt that the decision … will seriously damage the constructive efforts made in order to resolve problems between the two countries,” the ministry said in a statement. “We call upon the U.S. administration to go back on this wrong decision. An equivalent response to this aggressive attitude will be given without delay.”

Brunson, a 50-year-old North Carolina pastor who led a Protestant church in the city of Izmir along the Aegean coast, was one of 20 Americans arrested after the failed 2016 coup against Erdogan. Turkey blames Brunson for collaborating with American-based cleric Fethullah Gulen and the Kurdistan Workers’ Party for trying to overthrow the government. He could face up to 35 years in prison, if convicted.

Brunson was recently put under house arrest after 21 months in jail due to deteriorating health. The move angered officials in the Trump Administration, particularly Vice President Mike Pence, who believed he should have been released.

“Pastor Brunson’s unjust detention and continued prosecution by Turkish officials is simply unacceptable,” Treasury Secretary Steven Mnuchin said in a statement. “President Trump has made it abundantly clear that the United States expects Turkey to release him immediately.”

The situation is a setback for U.S.-Turkish relations, which has hit a rocky patch in recent years as Erdogan has moved closer to the government of Russian President Vladimir Putin. However, the U.S. and Turkey have a long history of military collaboration. Incirlik Air Base in southern Turkey, for instance, has been a vital point on NATO’s southern flank for more than a half century. It now plays a vital role in hosting warplanes in the fight against Islamic State and is home to several dozen B61 thermonuclear bombs that can be dropped by bombers at low altitude on a battlefield.

Despite these long-standing and significant ties — not to mention the huge potential to backfire — the Trump Administration had to deliver a message to Erdogan and the Turkish government that imprisoning Americans is not acceptable, according to Eric Edelman, former ambassador to Turkey. “Suffice it to say I think these are totally appropriate measures to take in order to deal with the Turkish government’s hostage taking,” he said, “not only of Pastor Brunson but also other Americans and the U.S. government’s local employees.” 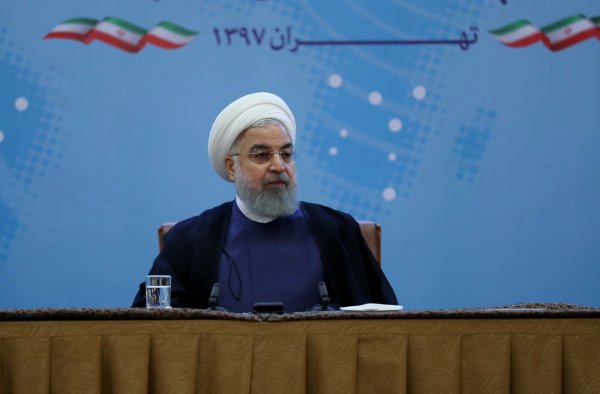 Trump Says He Would Meet Iran's Rouhani
Next Up: Editor's Pick