Donald Trump’s former campaign manager once bought two silk rugs for $160,000. He once spent more than $400,000 in a single year on high-end clothing. And he regularly paid for his extravagant expenses through international wire transfers.

Those were just some of the details about longtime Republican consultant Paul Manafort’s lifestyle while he was working for foreign clients that federal prosecutors brought before jurors on the second day of his trial on tax and bank fraud charges.

Prosecutors provided the details to help establish Manafort’s income and involvement in the payments. But Judge T.S. Ellis sternly reminded the lawyers and the jury multiple times on Tuesday that Paul Manafort is not on trial for living large. “We don’t convict people because they have a lot of money and throw it around,” he said.

Government attorneys with Special Counsel Robert Mueller’s team seemed to be using a time-worn legal tactic, highlighting extravagant purchases well beyond the means of a typical juror while arguing that Manafort financed his lifestyle in part by cheating the government out of taxes he owed.

The prosecutors’ courtroom strategy underscored the dry and methodical way in which Mueller’s investigation has moved ahead, in stark contrast to the angry spasms it has elicited from President Donald Trump.

The Alexandria, Virginia courtroom felt a lot further than the nine miles away it was from the White House, where Trump spent the morning tweeting, at one point appearing to urge his own attorney general to shut down Mueller’s probe. With electronic devices barred, those in the crowded federal courtroom didn’t even see the tweets until a brief lunch break.

While Trump tied Manafort’s trial to his denials of collusion with Russia — writing “these old charges have nothing to do with Collusion — a Hoax!” and asking “Where is the Russian Collusion?” — the question of Russian influence on the election barely hung over the days proceedings. In fact, at the outset of the day, Ellis even banned the word “oligarch” from the courtroom in reference to people Manafort dealt with during his work in Ukraine and Russia, saying the word had “come to have a pejorative meaning.”

Even as the world outside the courtroom walls continues to debate whether the Trump campaign —which Manafort worked for for five months — colluded with Russia during the election, inside the Alexandria courthouse, the day stayed focused on one man and whether he illegally gamed the system to enrich himself.

The prosecution called multiple witnesses to highlight and explain specific expensive payments Manafort had made. FBI Special Agent Matthew Mikuska, who participated in the raid on Manafort’s Virginia condo last summer, said they found “closets full” of suits and numerous invoices, including one for $160,000, paid for by wire transfer from a Cypriot bank, for two silk rugs. Maximillian Katzman, 29-year-old purveyor of luxury menswear at his father’s New York City store Alan Couture, testified about how much Manafort had spent at the store each year from 2010 to 2014 — totaling $929,020. That total includes one year in which Manafort spent $444,160 on Alan Couture. Katzman noted Alan Couture had about 40 regular clients, and that Manafort was the only one who paid for his goods by international wire transfer.

Ronald Wall, head of finances for luxury, appointment-only brand House of Bijan, revealed a similar pattern of spending. From 2010 to 2012, Manafort spent $334,325 at House of Bijan, also paying through international wire transfers, which Wall said wasn’t the typical method of payment among his customers.

The prosecution is attempting to prove that Manafort falsely signed his income tax returns, omitting some of his income and hiding foreign bank accounts. The prosecutors claimed that the detail and attention paid to each item Tuesday would prove that Manafort directed payment for each and that they were each personal rather than business expenses, and that detailing specific expenditures and how he paid for them was necessary to demonstrate Manafort’s income, which they say he underreported on his tax returns.

Ellis gave the prosecutors leeway in certain instances, but reined them in in others, refusing, for example, to let them show jurors photos of specific expensive suits found in Manafort’s closet. “I understand this effort to show he lived lavishly, but at some point that’s not really relevant,” the judge said.

Still, along with calling the two representatives of high-end fashion brands, the prosecution also brought witnesses to show that Manafort and his wife had purchased three Range Rovers and a Mercedes-Benz over the time period in question, bought a house for their daughter at a list price of $1,899,000 (“Go for it,” Realtor Wayne Holland recalled Manafort saying of putting in a bid for the house at asking price), and financed an extensive landscaping project costing more than $100,000 for their daughter’s garden, including installing an outdoor kitchen and a pergola modeled after one in Central Park. On multiple properties he owned, Manafort spent more than $3 million with SP&C Home Improvement Inc. from 2010 to 2014 on home improvements, including dining room and kitchen renovations. Many of these payments outlined in the courtroom Tuesday also came through international wire transfer.

The defense signaled during their opening arguments on Monday that their strategy will be to try to pin the crimes on Manafort’s deputy Rick Gates, so the prosecution laid out in detail payments that were directed by Manafort, items that were found in the raid on his home, and asked each witness if he knew of or had dealt with Gates (many said no; two said they dealt with Gates on Manafort’s financial matters). The prosecution noted Monday that Gates, who has pleaded guilty in the case and was expected to testify for the prosecutors, “may not” testify in this case after all, leading multiple journalists to bolt from the courtroom to relay the news.

As the high-profile first trial resulting from charges brought from the Mueller investigation, Tuesday’s session was filled with about 80 onlookers sitting on wooden benches in the back of the room, a mix of journalists and curious civilians distinguishable only by whether they had a notebook in hand. The tension at times was evident in the lawyers as well: Ellis reprimanded both sides for needing to “rein in their facial expressions,” saying he’d heard that some could see lawyers rolling their eyes after conferring with him.

Ellis and the lawyers are eager to keep the case moving as quickly as possible, and the prosecution said Tuesday they hope to finish calling their witnesses next week. The jury, meanwhile, is planning ahead: they asked Ellis for permission to bring in a birthday cake on Friday. The judge, cantankerous at multiple points of the day with the lawyers on both sides, agreed. 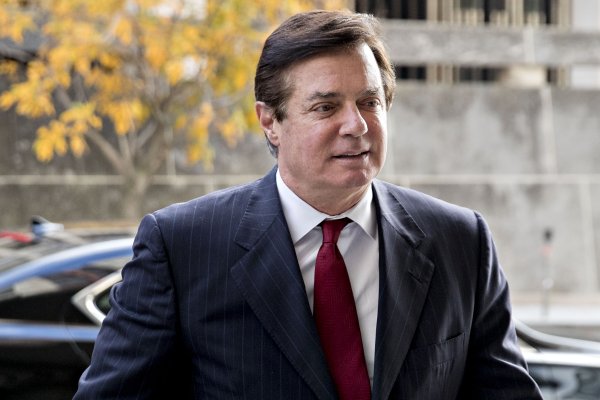 Paul Manafort's First Trial Has Started. Here's What You Need to Know
Next Up: Editor's Pick