Why the Legal Battle Over 3D-Printed Guns May Prove Futile

Cody Wilson holds what he calls a Liberator pistol that was completely made on a 3-D-printer at his home in Austin, Texas on May 10, 2013.
Jay Janner/Austin American-Statesman via AP, File
By Gina Martinez

An emergency order by a federal judge Tuesday night blocked Cody’s Wilson’s Defense Distributed from posting plans for 3D-printed guns online. It’s the latest turn in a three-year legal battle that seemed to be near an end last month when the federal government settled with Wilson and said he could post plans online starting Wednesday.

Gun control groups, 20 state attorneys general and even President Donald Trump quickly voiced concerns that the guns are unchecked, untraceable – and could even be made undetectable – touching off a new round of lawsuits.

Why 3D-printed guns will be very hard to stop

But University of California-Los Angeles law professor Eugene Volokh says the fight against 3D-printed gun blueprints may prove futile, no matter the outcome of Wilson’s court battles. Volokh says that the government will have a hard time controlling the spread of information on the internet, especially since 3D-printed gun plans are already online from other sources.

“Let’s assume Defense Distributed takes this stuff down, what about all the other sites?” Volokh says. “There are foreign sites that already have it up. How can the federal government regulate information? Whether it’s WikiLeaks or these kinds of blueprints.”

He adds that to truly block the spread of 3D-printed guns, it’s not enough for the government to just go after Wilson. “They would have to go after Google, internet service providers. It would be a national-level blocking of sites that the federal government determines you’re not able to access. Really the only way to sharply empower the federal government is to set up a list of sites that people can’t access on internet.”

The federal government could also attempt to force 3D-printing manufacturers to create a feature on their printers that recognizes and blocks the printing of guns, but Volokh points out that the software on the machines can be modified to get around that.

Ultimately, he says, a person determined enough to access 3D-printed gun plans and make a weapon in their home would likely to be able to get around government restrictions.

“You have to spend a lot of time, buy a printer then assemble. Anyone motivated to do that will get it, whatever prices available,” he says.

Are 3D-printed guns a First Amendment or Second Amendment issue?

While gun safety advocates and politicians are focusing on the potential threat 3D-printed guns could pose, Wilson and his backers insist that the legal fight is about free speech, not gun control

Wilson’s attorney, Josh Blackman, tells TIME that Tuesday night’s injunction to take down the gun blueprints is “censorship of free speech on all Americans, not just my client.” He points out that plans have been online since last Friday and have been downloaded thousands of times.

“We are disappointed in this ruling, which will result in a global injunction on the freedom of speech,” he said in a statement.

“I suppose you could order American service providers to block access or ask Google not to serve these sites in search results, but that’s the way China does things. I think short of draconian efforts like that, practically speaking, the states are fighting a battle they can’t win, stopping the spread of information is very difficult,” he says.

He says that companies like Google could potentially remove sites hosting 3D-printed gun plans from their indexes – as they have done for sites that sell unregulated pharmaceuticals. In that case, Google’s action came at the request of the Federal Drug Administration, which claimed doing so was in the interest of public safety.

What is the status of the legal fight over 3D-printed guns?

In his order on 3D-printed guns on Tuesday, U.S. District Judge Robert Lasnik temporarily blocked the U.S. State Department’s settlement that allowed Defense Distributed to post the 3D-printed gun blueprints. He set a follow-up hearing to address the issue again for Aug. 10.

“There is a possibility of irreparable harm because of the way these guns can be made,” Lasnik said.

Lasnik said there were potentially First Amendment issues in blocking the plans from being posted – and that those would have to be worked out.

Wilson complied with Lasnik’s order and temporarily shut down his website. But he has vowed to fight all the way to the U.S. Supreme Court, if necessary.

The Brady Campaign to Prevent Gun Violence celebrated the last-minute decision, saying it will “protect innocent lives across the U.S. and even worldwide.”

“It is immediately obvious to anyone who looks at this issue that 3D-printed guns are nothing short of a menace to society, and we are thrilled that the court ruled in this manner,” Avery Gardiner, co-president of the Brady Campaign, said in a statement Tuesday. “The efforts of these Attorney Generals throughout the nation have helped strike a powerful blow against the scourge of 3D-printed guns, but we know this fight is not yet over. We will continue to do everything in our power to make sure that this temporary halt in publication becomes a permanent one.”

The National Rifle Association said in a statement that the availability of 3D-printed gun plans will not lead to widespread production of undetectable plastic firearms because of a 1988 law that makes it illegal to own or make a completely plastic gun of any kind.

“Regardless of what a person may be able to publish on the Internet, undetectable plastic guns have been illegal for 30 years,” the statement read. “Federal law passed in 1988, crafted with the NRA’s support, makes it unlawful to manufacture, import, sell, ship, deliver, possess, transfer, or receive an undetectable firearm.”

Wilson’s legal battle began after he posted plans for his 3D-printed pistol “The Liberator” online in 2013. The State Department ordered Wilson to take down the plans, arguing that his post violated laws that regulate the export of firearms. The department said online distribution of gun designs was a form of international distribution of weapons – which falls under the State Department’s purview. Wilson sued the government in 2015, alleging that officials were violating his First Amendment right to free speech.

After his unexpected victory, Wilson announced he would post blueprints on his newly redesigned pistol on August 1. As that date approached, politicians became more vocal, expressing concern about the implications of widely available 3D-printed weapon plans. A multi-state lawsuit was filed on July 30 against the Trump Administration, arguing the actions resulting from the settlement violate the Administrative Procedure Act and the Tenth Amendment.

The resulting injunction is only temporary and raises questions about what comes next in the legal fight over 3D-printed guns.

What the White House is saying

On Tuesday, President Donald Trump tweeted that he is looking in to 3D-printed guns after consulting with the NRA.

“The Department of Justice made a deal without the President’s approval,” Sanders said during Wednesday’s press briefing. “The president is glad these efforts were delayed to give more time to review the issue. This Administration supports the decades-old legislation already in the books that prohibits the ownership of a wholly plastic gun.”

Most Popular on TIME
1
'It's Frightening All Around.' Former Intelligence Officials Warn Trump's Debt Is a National Security Threat
2
Alarming Data Shows Possible Third Wave of COVID-19
3
The Inside Story of Signal 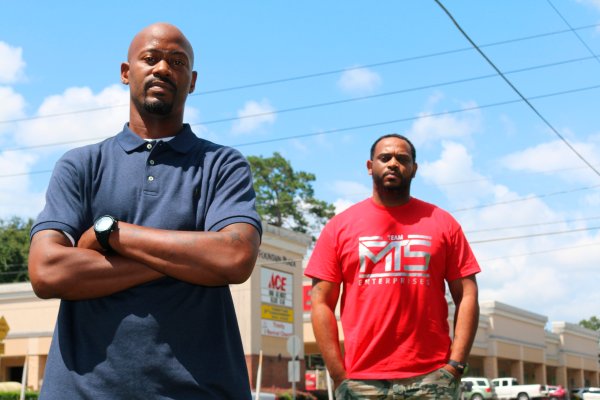 Two Black Men Were Returning a Truck at a Florida Strip Mall. The Owners Shot at Them
EDIT POST