Imran Khan's Victory in Pakistan Could Bring Stability. But at What Cost?

Last week, Pakistanis selected the world’s latest celebrity-turned-political leader, voting for former cricket star Imran Khan to become the next prime minister. Being a political player in Pakistan is not for the faint of heart; in the seven decades since independence, Pakistan has successfully transferred power from one democratically-elected government to another just once; Khan will be the second.

The Oxford-educated Khan rose to fame as a cricketer during the 80’s and 90’s, where he also developed a reputation as something of a playboy. But as he moved further away from his playing days, he moved closer to Islam and politics, founding the Pakistan Justice Party (PTI) in 1996.

For nearly two decades, Khan’s party didn’t do very much on the political scene, though Khan used his platform to relentlessly criticize Pakistan’s notoriously corrupt political system. The consistency—and ferocity—of that anti-corruption message finally pushed him and his party to a political breakthrough in July.

Khan is hoping to become the first Pakistani prime minster to fully serve out their term, something that has not happened once with any of his 18 predecessors. All aspiring politicians in Pakistan must contend with the two fixtures of Pakistan’s political scene: the dynastic families who have ostensibly run the country, and the Pakistani military that actually has run it. Khan has been able to overcome the former by basically falling in line with the latter.

Expectations for Khan and his party were running high in the run-up to elections, but they actually over-performed; as of this writing, the PTI has secured 115 seats of the 137 needed to secure an outright parliamentary majority. That stellar performance has many—particularly Khan’s political opponents—accusing Pakistan’s army of interfering to boost its preferred candidate.

It wouldn’t be the first time. Thirty years ago, Khan’s predecessor, the right-wing Nawaz Sharif, was selected by the military to be groomed to eventually become prime minister; Sharif had his entire political career effectively funded by the country’s military. That was all well and good for Sharif until he fell out of favor with the military powers-that-be—many believe that the Supreme Court’s disqualification of Sharif over corruption charges was at the behest of the military.

Sharif had been the army’s preferred candidate for his ties to the country’s Islamist factions—ties which Khan also happens to have. Officially, the army maintains that it wanted fair elections and had no designs to intervene. Unofficially, the rhetoric Khan was using in the run-up to elections was a pretty clear sign to military brass that Khan was ready to play ball. That effectively means Khan will likely cede security and foreign policy decision-making (particularly the country’s relationship with India, Afghanistan and the U.S.) to military leaders. In so doing, he will likely be given freedom to operate the economic side of things.

That may in fact be the harder of the two; Pakistan’s economy is in awful shape. There is no Asian currency performing worse in 2018 than Pakistan’s rupee, which has already been devalued four times since December. Foreign exchange reserves are at a 3.5 year low, and the current account deficit has exploded, with a 42 percent spread since January. Without external help, the government is staring at balance of payments crisis and will be unable to service its national debt. And all that is before Khan gets to the 40 percent of Pakistan’s population currently living in poverty.

Enter the IMF. The Washington-based institution had thrown the country a lifeline back in 2008 with a $7.6 billion loan; Islamabad will need as much as double that this time around. Since the late 1980s, Pakistan has received no less than a dozen bailouts. For his part, Khan has signaled a willingness to take on the political and financial burdens that come with accepting a conditions-based IMF loan, one that will likely necessitate another round of currency devaluation and the privatization of state-owned enterprises. That may still be a better option for Pakistan than turning to China for a bailout; many believe that it was Pakistan’s recent-reliance on Beijing for financing that got them in such dire financial straits in the first place.

But make no mistake; this was undoubtedly a “change” election for Pakistan. And change, by itself, is neither inherently good nor bad. Khan’s political rise has some decided points going for it: his apparent closeness to the military makes a coup exceedingly unlikely, and will harmonize relations between the army and the civilian government, potentially providing a level of political stability that has been sorely lacking in recent years.

On the flip side, if you hoped for a democratic Pakistan with separate institutions keeping one another in check, this government will probably disappoint you. The country’s military will continue to be significantly involved in the politics of the country going forward. That’s good for Khan but bad for Pakistan.

What’s more, Khan himself has been inconsistent on his economic messaging, at times vowing to support the country’s most economically vulnerable with significant welfare programs while at others pledging to boost the country’s image in the eyes of international investors, largely by reforms that would support the country’s private sector. These are two diametrically opposed visions of how to run a 21st century economy, and it’s still not clear which of the two will win out.

Khan must tread carefully; the real test will come the first time he tries to implement the significant reforms he’s promised that don’t have the backing of the military. That’s when we’ll really know just how much progress Pakistan has made.

Ian Bremmer is the president of Eurasia Group and GZERO Media, and host of GZERO World on WNET/Thirteen 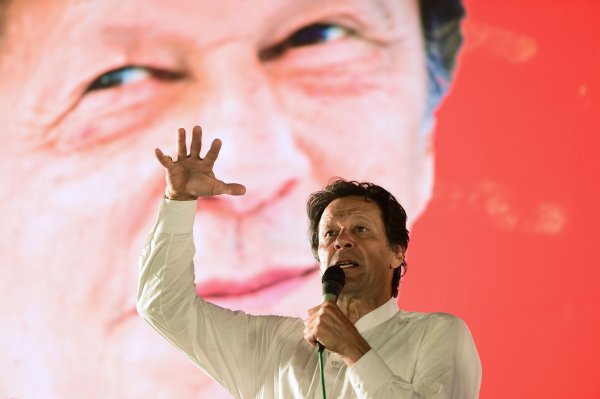 Imran Khan Is Pakistan's Donald Trump. Here's What That Means for Relations Between Their Countries
Next Up: Editor's Pick