When the U.S. Senate confirmed President Bill Clinton’s nomination of Ruth Bader Ginsburg to the U.S. Supreme Court by a 96-3 vote on Aug. 3, 1993 — precisely 25 years ago Friday — that decision set Ginsburg on the path to legal (and viral) history. That process was also noteworthy for her decision to take “the unprecedented step of strongly endorsing abortion rights” in a Supreme Court confirmation hearing, as TIME reported back then.

“It is essential to woman’s equality with man that she be the decisionmaker, that her choice be controlling,” Ginsburg told Senators during her four days of questioning by the Senate Judiciary Committee. “If you impose restraints that impede her choice, you are disadvantaging her because of her sex.”

Today, the idea that a judge’s views on abortion rights might be determining factor for his or her suitability for a seat on the Supreme Court is unsurprising. In particular, the landmark 1973 case Roe v. Wade is frequently referred to as a “litmus test” for a justice. So it might come as a surprise that, though she made history by endorsing abortion rights during her confirmation hearing, Ginsburg had well-known reservations about Roe.

Her views on abortion came up during her confirmation hearings in part due to a lecture she’d given earlier that year at New York University School of Law, in which she discussed the topic. At one point during her talk, she critiqued the Court for the structure of its decision in Roe v. Wade:

Kate Michelman, then president of the National Abortion Rights Action League, called on the Senators to determine “whether Judge Ginsburg will protect a woman’s fundamental right to privacy, including the right to choose, under a strict scrutiny standard.” The questioning was strong enough that Ginsburg’s husband Marty Ginsburg, one of the fiercest advocates for her judicial career, got academics to call the White House and clarify that she was talking about the Court’s thinking in 1973, not the ultimate decision.

When Sen. Hank Brown (R-CO) asked about her remarks during her confirmation hearing, she clarified her stance: “Abortion prohibition by the State, however, controls women and denies them full autonomy and full equality with men. That was the idea I tried to express in the lecture to which you referred.”

Ginsburg said that she believed it would have been easier for the public to understand why the Constitution protected abortion rights if it the matter had been framed as one of equal protection rather than privacy. And in fact, there was a specific case she had in mind as one that should have driven the national conversation, instead of letting Roe carry that weight.

She told the Senators that she “first thought long and hard” about abortion rights when, as a lawyer for the American Civil Liberties Union (ACLU), she took on Struck v. Secretary of Defense, a case that was on the Supreme Court’s calendar during the same term that Roe was decided. Susan Struck was an Air Force Captain who got pregnant while serving in Vietnam and sued the Air Force after it said she would have to either get an abortion at the base hospital or leave if she wanted to have the child. She told the Air Force that she didn’t want to get an abortion; she wanted to use the vacation days that she had saved up to give birth and then put the baby up for adoption because abortion violated her Roman Catholic faith.

Here’s how Ginsburg explained her approach — that sex discrimination includes discrimination because of pregnancy — to the Senate Judiciary Committee:

Struck lost in the lower courts, and the Supreme Court agreed on Oct. 24, 1972, that the case should be heard — but that never happened, because the Air Force waived Struck’s discharge and allowed her to remain in the service before that date rolled around. (As Ginsburg told law students in a summer program in July 2008, according to the 2016 edited collection of her remarks and writings My Own Words, Solicitor General Erwin Griswold had recommended that course of action for the Air Force because he thought the government could potentially lose the case.) The Roe decision came out three months later.

Ginsburg has described calling Capt. Struck in December of 1972 to see if she had been denied anything else because she was a woman, “hoping to keep the case alive.” Struck told her she would have liked to become a pilot but the Air Force didn’t let women become pilots.

“We laughed, agreeing it was hopeless to attack that occupational exclusion then,” Ginsburg recalled. “Today, it would be hopeless, I believe, to endeavor to reserve flight training exclusively for men. That is one measure of what the 1970s litigation/legislation/public education efforts in the United States helped to achieve.”

Despite her impassioned response on the matter of abortion, Ginsburg’s confirmation hearings are also known for setting the precedent of the so-called “Ginsburg rule,” which refers to her refusal to comment on some pending cases or cases that could come before the court. Ironically, as President Trump’s Supreme Court nominee Brett Kavanaugh faces the process Ginsburg endured 25 years ago, some experts predict that he will rely on the Ginsburg rule to get out of answering questions about his views on just the very subject on which she spoke so memorably. 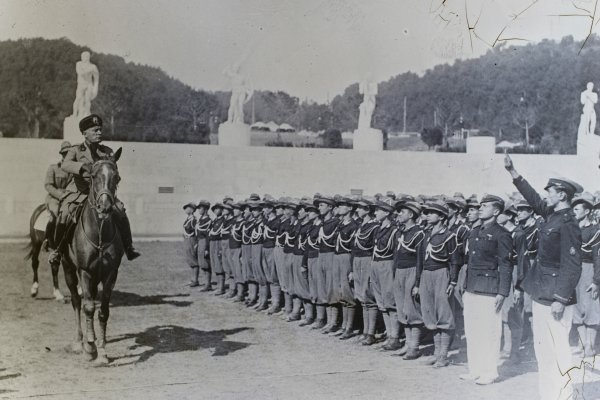 How Fascism's Influence Endured in Italy Long After Mussolini's Death
Next Up: Editor's Pick