Zimbabwe's Elections Were Meant to Kickstart a New Era. Here's Why They Fell Short

People queue in order to cast their ballot outside a polling station located in the suburb of Mbare in Zimbabwe's capital Harare, on July 30, 2018.
Luis Tato—AFP/Getty Images
Ideas
By Knox Chitiyo
Chitiyo is an associate fellow of the Africa program at Chatham House, the London-based think tank for international affairs.

Before Zimbabwe’s general elections on July 30, we heard a lot about “landmark change” and “credibility.” But in many ways, it was déjà vu.

President Emmerson Mnangagwa’s ruling ZANU-PF party won the parliamentary vote, taking a majority 144 seats out of 210. The opposition MDC Alliance, a seven-party coalition led by Nelson Chamisa, won 64 seats—an improvement on their 2013 showing of 44 seats, but still falling far short of expectations. The presidential results were much closer. After clashes on Wednesday, the incumbent Mnangagwa was declared winner early Friday morning, taking 50.8% of the vote against Chamisa’s 44.3%. The 21 other independent presidential candidates polled less than 5% between them.

The polls didn’t quite live up to the hype. There was much that was positive: the prelude and election day were peaceful, with a minimal military presence. Opposition candidates were able to hold nationwide rallies (including in ZANU-PF’s rural heartland) without interference—an electoral first. ZANU-PF leaders and the military called for a peaceful process. Four women candidates contested the presidential vote, another first. More than 5 million Zimbabweans registered (out of an eligible voting population of 7.2 million), and there was a near record 75% turnout on voting day. Zimbabwe invited official observers from 46 countries and 15 international organizations, and, for the first time since 2002, observers from the EU, the Commonwealth, and the U.S. were present.

But shortcomings included late public access to the imperfect biometric voters roll and controversies about the ballot papers. There were also misogynistic social media attacks and threats against female candidates and Zimbabwe Electoral Commission (ZEC) Chair, Justice Priscilla Chigumba. The three-day wait for presidential results saw a further decline in public trust in the ZEC, and the opposition’s premature announcement of a Chamisa victory only fanned the political flames. On Wednesday, six unarmed civilians were shot dead by soldiers in Harare, with dozens more assaulted. A Joint International Observer Mission statement promptly condemned the violence and called for restraint.

The elections process was a boon for democracy, but ironically the result has entrenched the two-party parliamentary system and marginalized alternative voices. Mnangagwa has been conciliatory in his post-election statements, saying that Nelson Chamisa has a “crucial role to play” and calling for unity to “build a new Zimbabwe for all.”

But Chamisa’s MDC Alliance has refused to accept the results, calling them “fake” and a “scandal.” The MDC has raised genuine transparency concerns and will likely challenge the results in court, but much of this may be cosmetic—with little chance of a 2017 Kenya-style presidential re-run. There is no critical mass of opposition parties to sustain a challenge,nor is there a popular appetite for a protracted political feud.

Zimbabwe’s democracy agenda may be heading into the slow lane, and Chamisa may be pressured by his coalition partners to make a political accommodation with Mnangagwa. Nevertheless, despite setbacks, Zimbabwe’s opposition and civil society has a long history of resilience under pressure and the struggle for democracy will continue.

Mnangagwa has a full in-tray. This week sees his re-inauguration, meetings with investors, and intense speculation about his next Cabinet. He has to unite a fractious ZANU-PF and manage internal civil-military and generational faultlines. Beyond that, he may need a public reconciliation with Chamisa—similar to how in Kenya and Mozambique, similar incumbent-opposition quarrels were mended by public rapprochements.

But Zimbabweans are now in a post-political, economy-first mood. Resolving the cash crisis is crucial. Few Zimbabweans can withdraw more than $50 a day from banks or ATMs—and much of this is paid out in unpopular ” bond coins.” The formal sector has contracted to only 20% of the economy, and the informal sector lacks the capacity to push an economic renewal.

Zimbabwe’s new internationalism is premised upon the 2015 Lima process economic reform pathway for debt arrears clearance. (The country has a $10 billion foreign debt.) There has been a modest increase in foreign and diaspora investment, but the big-money Chinese, Russian and other pledges are long-horizon projects. What Zimbabwe needs is a short-term economic stimulus—to support small and medium-sized businesses.

For this to happen, Mnangagwa has to stay the course on economic reform, ease of doing business and the anti-corruption agenda. The pivot from reform to transformation in Zimbabwe will require all hands on deck, including civil society, the opposition, Zimbabwe diaspora and foreign investors, in a partnership for development.

A positive global verdict on the elections could supercharge investment, but time will tell whether these polls have been a deal-maker or a deal-breaker. Zimbabwe’s elections often split the global south and the global north, and this could be the case again. The E.U. will have to decide whether to continue their incrementalist rapprochement with Zimbabwe, or accelerate to the reciprocity-based, “Re-Engagement 2.0” approach currently favored by the U.K. (The U.S. is unlikely to lift statutory sanctions anytime soon.) Zimbabwe’s possible return to the Commonwealth could also be divisive, given the broader global context of the perceived existential clash between beleaguered liberal democracy and the rise of populist—and popular—autocracies across the globe.

President Mnangagwa—along with South Africa’s President Cyril Ramaphosa, Mozambique’s Filipe Nyusi, and others—belong to a pragmatic new wave of regional economic reformers nudging liberationism away from ideology. He now has an electoral mandate to lead a divided country. For sisters Chipo and Tendai, both businesswomen based in Harare who voted for Mnangagwa and Chamisa respectively, the future needs to come now. “There is too much talk,” they told me. “We live every day between hope and despair. We need cash and jobs. We are tired of being tired.” 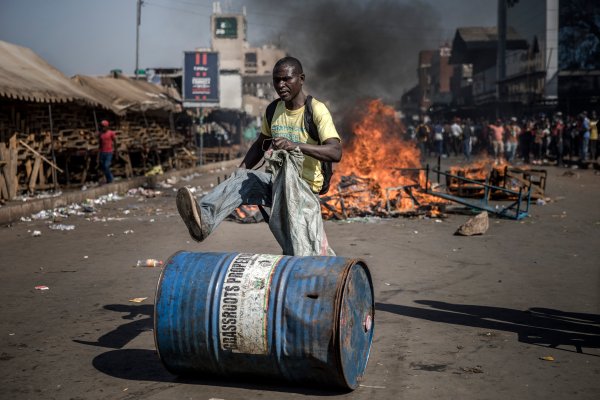