There Are 14 Active Wildfires Burning Across California. This Map Shows All of Them

Fast-moving and aggressive wildfires are scorching California – killing at least nine people and destroying more than 1,000 homes and businesses.

Thousands of firefighters are currently battling the flames of 14 active fires, which are threatening communities from Redding in Northern California to Orange County in Southern California. By Monday, the Mendocino Complex fire burning just north of wine country in Northern California became the states largest-ever fire. It has now burned 290,692 acres and is just 34% contained, according to California’s Department of Forestry and Fire Protection (Cal Fire).

More than 160 miles north, the Carr Fire in Redding has burned through 164,413 acres and is 47% contained, as of Tuesday morning. Sparked by a vehicle failure nearby, the fire has destroyed more than 1,000 homes and taken the lives of at least seven people. Down in Mariposa County near Yosemite National Park, thousands of firefighters are still battling the stubborn Ferguson fire. That 94,331-acre flame is now in its 26th day and promoted Yosemite National Park officials to close the popular Yosemite Valley for the first time in 20 years — during peak tourism season. Two firefighters have also died while working on the fire.

Together, these fires — along with the growing Holy Fire in Orange County and a number of other infernos across the state — have destroyed more than 1,000 homes and structures, and have taken at least nine lives. Some of California’s wildfires are burning in mountainous areas, making it even more difficult for firefighters to contain them. And many are burning in areas experiencing record-shattering extreme heat.

This is only the beginning for California’s fire season. In recent years, the season has grown longer and more intense – prompting some officials to declare that fire season is now year-round. In 2017, California had its most destructive fire season yet, with an intense series of Northern California fires that scorched more than 245,00 acres and killed 44 people. Those fires began in October, a month that is typically considered the most dangerous for fast-moving, aggressive wildfires. December 2017’s Thomas fire in Santa Barbara and Ventura counties became the state’s largest-ever fire. But it appears just eight months later, the Mendocino Complex fire has surpassed it.

Below is an interactive map of all the major wildfires in California. 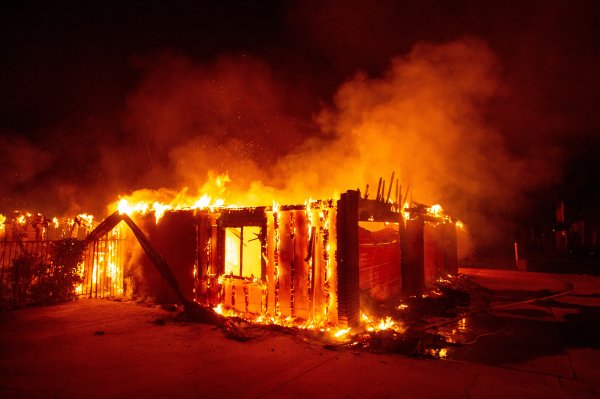 6 Dead, 966 Homes Destroyed in Carr Fire
Next Up: Editor's Pick