What started out as a boon for fans — the chance to see a big Hollywood hit in theaters every day for $10 a month — has turned into a struggle for survival at a company that hoped to shake up moviegoing.

As MoviePass runs low on cash, its subscribers have been subjected to ever-changing rules designed to curb demand and preserve the company’s dwindling resources.

MoviePass, owned by Helios & Matheson Analytics Inc., launched on the assumption it could offer fans daily movie admissions just under $10 a month. Since the company was paying theaters full price for tickets, the cash drain was instant and unrelenting. Hoped-for deals with major studios and the largest cinemas to share the costs never materialized.

Chief Executive Officer Mitch Lowe held an all-hands meeting with staff on Monday, where he suggested subscribers won’t be able to use their passes for some upcoming big releases, Business Insider reported Monday.

Neither MoviePass nor Helios & Matheson responded to phone and email requests for comment after normal business hours on Monday.

To stem the cash drain, MoviePass has imposed surge pricing. Some film fans posted photos of themselves in near-empty theaters after having paid the levy. Even midday, weekday screenings of pictures that have been in theaters for weeks have been subject to price hikes of as much as $6. Last week, older movies like “Skyscraper” were subject to fees at non-peak hours.

In response to a customer query via its Twitter feed, Moviepass said that as the surcharge “is calculated by the demand of the film holistically, some theaters may be fuller than others.”

No showings of movies from AMC, the nation’s largest cinema chain, were available on the app at least part of the day Monday. The theater didn’t take any action to block the service, according to a person with knowledge of the matter who asked not to be identified because of the sensitive nature of the situation. Cinemark and Regal theaters in New York and Los Angeles also appeared unavailable.

Meanwhile, MoviePass competitors — theaters, that is — are offering subscriptions that include more flexibility, even if at a higher price. Last week, subscribers to the $20-a-month service advertised by AMC Entertainment Holdings Inc. could choose “Mission: Impossible” from among three films they get to see each week. Cinemark Holdings Inc. started a plan with discounts on tickets and concessions.

Last week, New York-based Helios & Matheson did a reverse 1-for-250 stock split to retain its Nasdaq listing. The company said Friday it secured a $6 million loan from Hudson Bay Capital Management in a bid to keep its service going. The shares fell $1.20 to 80 cents on Monday, again threatening the company’s listing.

Lowe and lead investor Ted Farnsworth have said that they expect MoviePass to become profitable at 5 million subscribers. At the last count, the service had reached 3 million.

The question for subscribers is how long MoviePass can go on — and whether they’ll be able to see any movies at all. Some customers bought $90 annual subscriptions. 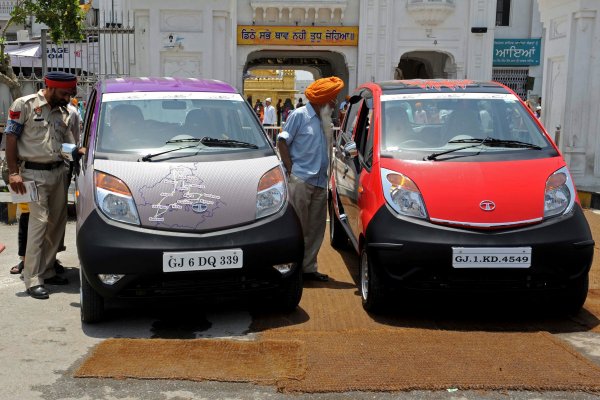 Is it the End of the Road for the World’s Cheapest Car?
Next Up: Editor's Pick