Former George H.W. Bush Speechwriter on Why the President Was Shy About Talking About His World War II Service in Public

I joined the Bush-Quayle presidential campaign in the summer of 1988 when I was 25, writing something called the “line of the day”—a one-page memo of catchy facts, stats, anecdotes on whatever the topic of the day was. Once we arrived at the White House, I began ghostwriting magazine articles by the President. I would send him questionnaires through intraoffice mail and he’d handwrite his answers. It was like having a pen pal. I worked my way up to doing more junior speechwriting stuff, like the turkey pardoning and statements of congratulations to spelling-bee winners. The more I wrote for him, the more I learned his style. He didn’t like to talk about himself much. If we used the word “I” too much he’d circle it, to mean “too many.” He felt that in a democracy the President should use the word “We.”

That’s probably why he was generally extremely reticent to talk about his World War II experience.

The most memorable speechwriting experience I had with him was writing a speech to commemorate the 50th anniversary of Pearl Harbor on Dec. 7, 1991.

One night at about 6 o’clock in the Oval Office, before the anniversary, we started talking about what his memories were of the day he heard about Pearl Harbor. Despite his father’s objections, he went to sign up for the Navy and got turned away because he was only 17. He showed back up on June 9, 1942, a few days before his 18th birthday and enlisted, becoming the youngest Navy pilot at the time.

Pearl Harbor had a huge effect on his life. Though he flew 58 combat missions, he bristled at being called a war hero. He thought the war heroes were the ones who didn’t come home. He told me about all of the buddies he had lost, the circumstances of their deaths, and him having to write to their parents. But every time he would tell me one of these stories, I’d say, “That’s an amazing story! Can I put that in the speech?” And he’d say, “Oh, God no! You can’t use that. I’m just telling you that.” And he wouldn’t let me use any of it! I pleaded, “Sir, give me something here!” I think he knew he would get very emotional while talking about it, and he didn’t want that to happen.

So we ended up deciding that the message of the speech I was working on, one of four speeches given that day, was to convey to his fellow veterans that it was time to bury the hatchet with Japan. One of his first acts as President was to attend the funeral of Emperor Hirohito — the same emperor who was on the throne when Bush’s plane got shot down over the Japanese island of Chichi Jima on Sept. 2, 1944; he survived but his two crewman died. The President thought it was important to send the message to all of the veterans of Pearl Harbor who were still alive that he did not bear any grudge against the Emperor because of his own personal experiences during the war. He had forgiven the Japanese, and it was time for them to as well. It was a uniquely appropriate speech for George Bush to give having survived being shot down.

I would make the argument that survivor’s guilt was what motivated him to public service and to build his amazing career. He wanted to show that his life was in gratitude for surviving and to repay his colleagues who didn’t make it. He wanted to make his life worthy of their sacrifices. And he did. What a remarkable life he led.

As told to Olivia B. Waxman as part of a presidential-history partnership between TIME History and the University of Virginia’s Miller Center of Public Affairs. Mary Kate Cary is a former speechwriter for George H.W. Bush’s administration and a Senior Fellow at the Miller Center. 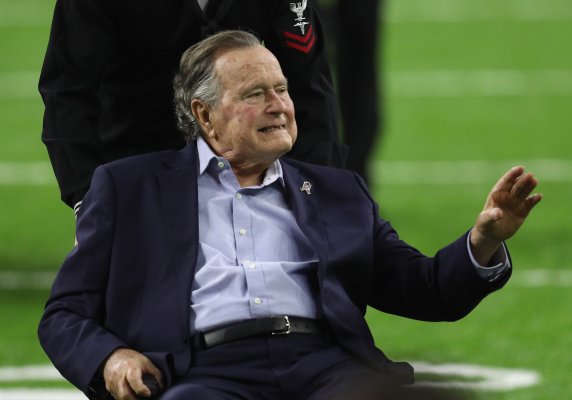 George H.W. Bush on Death, the After Life and Almost Dying in World War II
Next Up: Editor's Pick