“None of them are in favor of a Space Force, I say none of the top leaders, but they’re stuck. The President has said it and it will be interesting to see how they now deal with it,” Deborah Lee James, who was Secretary of the Air Force in the Obama Administration, said Monday at a Brookings Institution discussion about the newest proposed branch of the U.S. military.

Last month, Trump announced plans to create a new branch of the U.S military service he dubbed the Space Force – meant to be equal to the Army, Navy, Air Force, Marines and Coast Guard.

“When it comes to defending America, it is not enough to merely have an American presence in space,” Trump said. “We must have American dominance in space.”

Previously, the Air Force had handled the development of defense strategy in space and Air Force generals opposed the move. Congress would have to approve the creation of a new armed service branch.

When asked whether she supported the idea of a Space Force, James replied: “My very short response is no.”

She said 35,000 people are already working on Air Force space missions – and she fears they will get lost in the bureaucracy of a completely new military branch.

Instead, James suggested that Trump order the formation of a new military command, which could address what she believes is Trump’s primary motivation for wanting a Space Force – to prepare for a potential war in space.

“A military service trains, organizes and equips, it doesn’t war fight,” she said. “Combatant commands do the war fight.”

On Tuesday, defense news site Defense One reported that the Pentagon was already preparing to create major parts of the new Space Force, including the U.S. Space Command the Space Operations Force – which will be staffed by personnel from the existing military services. 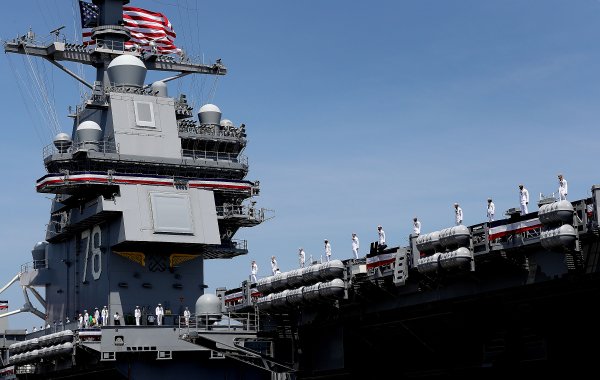 A Broken Gear Hobbled the Navy's New Aircraft Carrier. And It's Going to Cost $30 Million to Fix
Next Up: Editor's Pick