On Sunday night’s episode of Last Week Tonight, John Oliver broke format a bit for a very good cause — he sat down for an interview with Anita Hill to discuss the #MeToo movement.

Back in 1991, Hill came forward to accuse U.S. Supreme Court nominee Clarence Thomas of sexual harassment. She testified before the Senate Judiciary Committee for eight hours and ultimately the committee opted to brush her testimony aside and approved Thomas for the court where he now sits. “Re-watching the Senate debate about her now, it is depressing how many of the techniques used to undermine her are still around today,” Oliver said ticking them off on his hand: “Concern over false allegations, blaming the victim, to outright character assassination,” Oliver said. Despite that frustrating experience, thanks to the rise of the #MeToo and the Time’s Up movement, Hill is hopeful that change is happening.

“There has been a tremendous amount of change in public attitude and there has been a change in the information we have about sexual harassment,” Hill told Oliver. “Even a few years ago, people were ambivalent about what the consequences should be concerning behaving incredibly badly in the workplace.”

The timing of the interview was particularly prescient as it came just two days after CBS Corp. CEO Les Moonves was accused of inappropriate conduct in the workplace. Moonves was one of many prominent Hollywood names who attended the founding meeting of the Commission on Eliminating Sexual Harassment and Advancing Equality in the Workplace, which Hill chairs, according to Ronan Farrow’s exposé on Moonves in The New Yorker. The organization has downplayed his involvement with their important work.

Moonves is just the latest powerful man to be exposed, leading some men to claim they fear being alone with women. Through a series of clips showing Fox News personalities (all male, of course) saying they or their friends were afraid to be alone with women these days, Oliver asked Hill if this was normal. “Not if they are not harassers,” Hill said. “If you are a harasser, then you should be terrified.”

Oliver also admitted to not speaking out when he had seen inappropriate behavior in the past, claiming the power dynamics made him afraid to do so. After Hill gave him — and the audience — advice on how to better handle the situation in the future, Oliver asked her how she was feeling about the movement now. “I am feeling more optimistic than I was 27 years ago,” Hill said. “If we do nothing, then change is not going to come.” 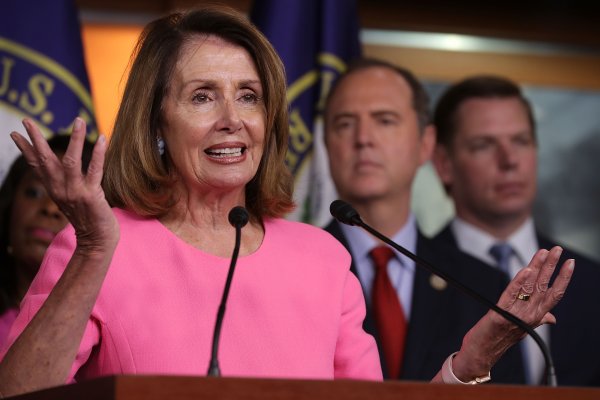 Nancy Pelosi Was a Special Guest on Friday's Episode of 'Jeopardy!'
Next Up: Editor's Pick