Rescuers are scrambling to reach hundreds of trekkers stranded on a mountain in Indonesia after a massive earthquake triggered landslides.

Not far from the epicenter, Mount Rinjani was hit with slides that blocked off escape routes, the BBC reports.

Rescuers evacuated more than 800 tourists from the mountain, according to the Associated Press. Helicopters have been dispatched to search for another 266 who remain trapped.

A Malaysian climber who was on a hiking trip to Lombok is reportedly among those killed.

The tremor rattled the popular tourist destination just before 7 am local time, damaging thousands of homes.

Damage is seen following an earthquake in Lombok, Indonesia on July 29, 2018.
Reuters

While the epicenter was located in Mataram, in northern Lombok, the quake was felt further afield, including 25 miles west in Bali.

Dozens of aftershocks rippled through the area leading to falling debris and toppled concrete, which the country’s disaster agency said caused most of the fatalities.

Indonesia’s meteorology and geophysics agency said it recorded over 130 aftershocks.

“The tremors were strong – I noticed waves in the hotel pool,” BBC Marathi journalist Vinayak Gaikwad said from Gili Trawangan Island, about 4 miles away from the epicenter.

“Thirty minutes later there was the first strong aftershock. The locals were worried because many of their structures are made from wood and bamboo,” he added.

The quake triggered blackouts in at least two districts.

Located in the Pacific’s “Ring of Fire,” a chain of volcanoes and fault lines, Indonesia is particularly prone to seismic activity. In 2004, a 9.1-magnitude earthquake near Sumatra prompted a tsunami and led to more than 230,000 deaths. 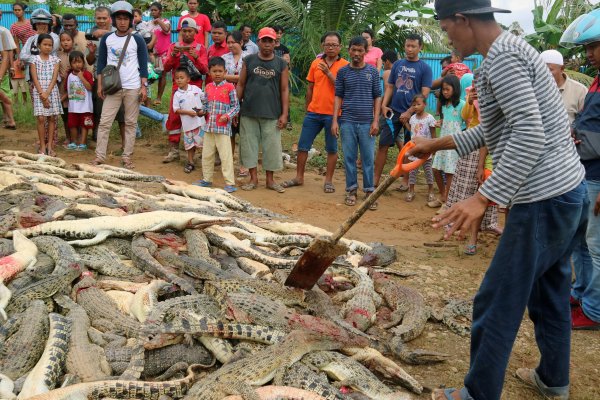 Indonesia Mob Kills 292 Crocodiles After Attack
Next Up: Editor's Pick