Cambodia's 'Illegitimate' Election Has Been Rejected by Main Opposition Party

Disqualified from contesting polls and forced to operate in exile, Cambodia’s main opposition party has rejected nationwide elections Sunday that cemented the rule of Asia’s longest-serving leader for another five years.

Viewed as unfree and unfair by most international observers, the polls bestowed a sweeping mandate to Prime Minister Hun Sen’s Cambodian People’s Party (CPP), which claims to have won every single seat in the national parliament.

But the vote was orchestrated to ensure such an outcome, Hun Sen’s critics say; his only credible challenger, the Cambodia National Rescue Party (CNRP), was banned last November after its President, Kem Sokha, was imprisoned on treason charges. The popular pro-democracy figure was accused of collaborating with the U.S. to overthrow the government.

What’s left of the opposition, now living abroad, said both the vote and Hun Sen’s government were “illegitimate,” calling for new polls. The U.S. and Europe both withdrew financial support for the polls, which had been provided in the past, over concerns about their credibility.

“29 July 2018 marked the death of democracy in Cambodia,” Mu Sochua, vice-president of the CNRP, said at a press conference Monday in Jakarta, calling the election a “costly electoral circus.”

“What happened yesterday can barely qualify as an election,” Kem Monovithya, the CNRP’s deputy director of public affairs and Kem Sokha’s daughter, tells TIME from Jakarta. “In the past, you had irregularities, you had problems here and there, but you still had the opposition, you still had the media, you still had credible observers.”

The months leading up to the election were marked with a brazen crackdown on the independent media and free speech. Access to independent media sites including Voice of America and Radio Free Asia were blocked just before the polls under a new order banning web content “considered as incitement.”

Ruling party officials have been accused of threatening to withhold basic services from constituents if they boycotted the vote, as the opposition had called for. Five former CNRP officials were fined $2,500 for supporting the “clean finger” campaign, a reference to the indelible ink used to mark voters.

The full fallout of the election is yet to materialize. Last week, the U.S. House of Representatives passed the Cambodia Democracy Act, calling for sanctions against 17 high-ranking members of the Cambodian government, including Hun Sen and two of his children.

In a statement, the White House called the “flawed” election “the most significant setback yet” for democracy in Cambodia’s modern history. “We are profoundly disappointed in the government’s choice to disenfranchise millions of voters, who are rightly proud of their country’s development over the past 25 years.”

The E.U. is also re-evaluating Cambodia’s compliance under the bloc’s duty-free trade scheme.

Read more: ‘You Cannot Speak as You Wish.’ Dissenting Voices Stifled Ahead of Cambodia’s Contentious Election

“This is a huge victory for us,” ruling party spokesperson Sok Eysan told Agence France-Presse as the early projections were made late Sunday. The CPP first claimed it had captured 80% of the vote, before telling Reuters on Monday it won all 125 seats in Cambodia’s National Assembly. Official results are not due until next month.

The opposition has rejected the CPP’s victory as illegitimate, and says it will rally international support for a new poll. “We are not going to accept five more years of Hun Sen’s rule,” says Kem Monovithya. “You cannot live in fear; that’s the message that Cambodian people need to hear.”

Some voters quietly expressed displeasure. While the government-aligned National Election Committee calculated turnout at 82%, a modest decline from 2017, an analysis by Asia Times estimated as many as 8.6% of ballots were spoiled in protest, including 14.5% of those cast in the capital, Phnom Penh. 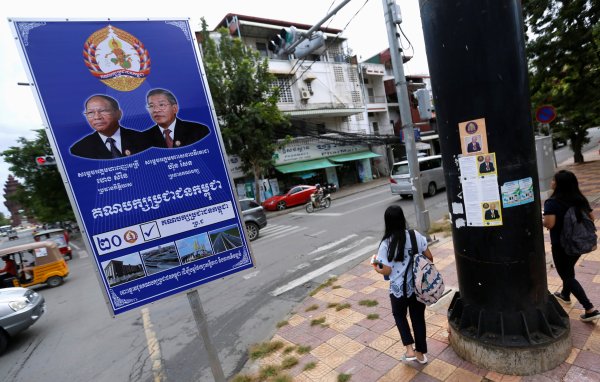 Climate of Fear Stifles Debate Ahead of Cambodia's Election
Next Up: Editor's Pick