Billionaire industrialist Charles Koch and the network of advocacy groups that enjoy his backing are doing little to mask their disgust with President Donald Trump and fellow Republicans who go along with his antics.

There are even signs of retribution afoot against Republicans who have enabled Trump’s notions on spending, trade, immigration and foreign policy.

As the Koch-backed Seminar Network began a three-day summit in the Rockies, officials on Saturday had tough words for Republican-dominated Washington, especially on the escalating trade wars. Although the 500 donors gathered here still stand ready to spend as much as $400 million on politics and policy ahead of November’s elections, few are enchanted with the GOP’s hold on power. Although they’ve spent billions to shape the current political scene, the Trump Administration is far from what they had hoped for.

“Stand by our principles and whatever cost. Resist all temptations in short-term gain,” Charles Koch told guests gathered at the grand Broadmoor Resort in Colorado Springs, Colo. “That’s exactly what we’re doing.”

(To be sure, there are flashes where this network is in agreement with the White House, especially when it comes to senior adviser Jared Kushner’s work on prisons and criminal justice. Repeatedly, longtime Koch adviser Mark Holden name-checked Trump’s son-in-law, who has a West Wing office. But the overlap is narrow and is insufficient to paper-over very deep disagreements with how the President is using his powers.)

In some ways, this disillusionment with Washington is part of a cycle inside Koch World.

These Koch-convened seminars started in 2003, when Charles Koch invited like-minded businessmen to kvetch about trade policy and government spending under President George W. Bush, a Republican. Now, 15 years later and facing another Republican in the White House taking similar actions, Koch is no happier.

This time, though, Koch has a well-funded political machine at his disposal. Americans for Prosperity’s permanent grassroots army outpaces anything else in Republican politics, Freedom Partners pushes a business-friendly agenda and i360 has thousands of pieces of data on every American over the age of 18.

And these groups can make life tough for those in its way. For instance, the Koch-backed groups have spent millions criticizing Republicans who voted for a $1.3 trillion GOP spending bill earlier this year and have not done more to pre-empt Trump’s trade war. They helped shepherd to passage a massive package of tax cuts, tanked a border tax that was a darling of House Speaker Paul Ryan, helped a criminal justice bill through the House and are stepping up their pressure on lawmakers to return to the table on immigration talks.

But with polls showing an energized Democratic electorate, less enthusiasm among Republicans, history leaning against Republicans holding their majorities and Trump roiling Washington an unpredictable politician, many officials and donors are bracing for a potential divided government.

“It’s radical, especially given the divisive climate that we’re in right now and how polarized and factionalized the country is in many ways, but we want to focus on radically and aggressively finding areas of common interest and where we can make progress on some of these issues, even if we disagree on other issues,” said James Davis, the Koch network’s top spokesman.

These twice-a-year seminars are by invitation-only. Donors-pony up $100,000 for three days of wonky policy talks, pitches from social service groups and hallway encounters with politicians. Under federal election law, these donors’ identities do not need to be disclosed. As a condition of attending, TIME has agreed not to identify donors who did not wish their names used.

Trump, who famously claimed incorrectly he had turned down an invitation to meet with this group in 2016 at this very site, got no pass. The Koch network sat out the 2016 presidential race and seems likely to do the same in 2020. In a video officials planned to show donors on Sunday, Charles Koch looks directly into the camera with a tough rebuke for “protectionism.”

“We’re seeing a rise in protectionism, where countries, organizations and individuals are trying to protect themselves from these changes. They’re doing whatever they can to close themselves off from the new, to hold onto the past and to prevent change,” Charles Koch says in the video. “This is a natural tendency, but it’s a destructive one because when people act in protectionist ways, they erect barriers, which makes everyone worse off.”

Although Koch never utters the President’s name, his aides do little to dodge the connection.

“Was it subtle?” said Brian Hooks, a top Koch lieutenant and co-chairman of the Seminar Network. “There’s nothing subtle about it. Protectionism is bad trade policy.”

Such policy is deeply offensive to Koch and his pals. Long a foe of subsidies they call “corporate welfare,” Trump’s direct payments to farmers to offset their losses in the trade war are a class apart and a transparently political answer to a disaster of Trump’s own making.

“It’s a bail-out to bad policy,” Davis said. “You can’t make this up. We put tariffs supposedly to put pressure on China and then it actually hurts farmers here. Crops waste away in the field. Then you pull a Depression-era program out to bail out famers and make them whole. But who’s underwriting our debt?” (That would be China.)

Still, as much as these donors protest, most will still begrudgingly back him as individuals when Trump runs for a second term. The 2020 presidential race could be well underway before these super-rich patrons meet again, likely early next year. And, when facing a choice between an eventual Democratic nominee — someone who may emerge from a race to the Left among the party — and Trump, it’s highly doubtful many here could bring themselves to vote for a Bernie Sanders or Elizabeth Warren. 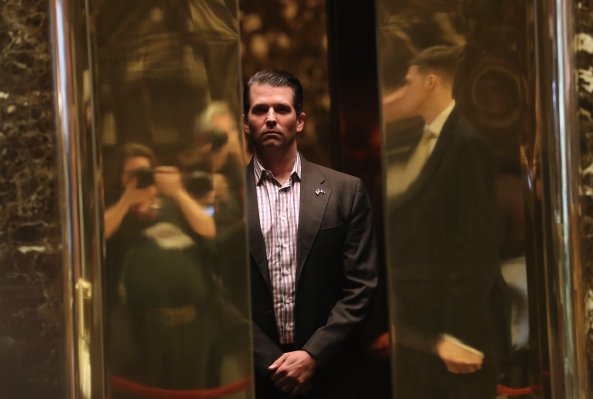 What We Know About the Controversial 2016 Trump Tower Meeting With Russian Officials
Next Up: Editor's Pick