Who is Andrew Brunson, the Evangelical Pastor Freed in Turkey?

American Evangelical pastor Andrew Brunson has been released from prison in Turkey, two years after he was arrested and charged with aiding a coup attempt against President Recep Tayyip Erdogan.

Brunson’s case has been a flashpoint in worsening relations between Turkey and the United States – and in a war of words between Erdogan and President Trump. In August, the U.S. imposed financial sanctions on Turkey, in an extraordinary move against a NATO ally. “Our relations with Turkey are not good at this time!” Trump tweeted.

The value of the Turkish lira has fallen almost 40% against the dollar in 2018, sending inflation sky high and sparking fears of an economic crisis.

Brunson’s release follows reports on Thursday that senior officials in the Trump administration had reached a deal with Turkey, apparently involving the easing of sanctions. If confirmed, that would mean a win for Trump’s strategy of using economic pressure in disagreements with foreign governments.

Here’s what to know about Brunson and how his arrest and detention became an international incident:

Who is Pastor Andrew Brunson?

Brunson, 50, is originally from North Carolina and has lived in Turkey for more than two decades, along with his wife and three children. He is a pastor at the small Izmir Resurrection Church and leads a congregation of around two dozen, according to the BBC.

Why was he arrested?

Turkish authorities arrested Brunson in 2016 as part of a sweeping crackdown after a failed military coup in July that year. Brunson was among thousands arrested, including journalists, activists and opponents of President Erdogan. Brunson was accused of being a spy with links to the outlawed Kurdistan Workers’ Party (PKK) and to Pennsylvania-based Muslim preacher Fethullah Gulen, whom Turkish authorities blame for the coup attempt. President Erdogan had previously indicated he would have been willing to swap Brunson for Gulen.

Brunson denied the charges, which carried a prison sentence of 35 years. In April his lawyer called them “totally unfounded” and said Brunson “was arrested due to his [Christian] faith.” Pence said there was “no credible evidence against him.”

Why did President Trump get involved?

U.S.–Turkey relations were already fraught because of U.S. support for Kurdish forces fighting in Syria, whom Erdogan considers terrorists.

But Brunson’s case increased the tension when it mobilized evangelicals in the U.S., who said he was being persecuted for his Christian faith. Anger over his detention came to a head in July, when Pence, an evangelical Christian, attended a three-day conference on religious freedom at the State Department—a new event organized by the Trump administration. Brunson’s daughter Jacqueline Furnari also attended. Pence said her father had been accused of “dividing and separating Turkey by simply spreading his Christian faith.”

After the summit he tweeted:

Trump followed through on Pence’s threats a week later, sanctioning two high-ranking Turkish officials and imposing tariffs on imports of Turkish steel and aluminum. He later doubled them.

But championing Brunson’s case played well with Trump’s evangelical base, who have called for greater protections of Christians abroad and applauded moves like the prioritization of Christians in Trump’s refugee policy.

Why did Turkish authorities release him?

A Turkish court sentenced Brunson to three years and one and a half months in prison, but ruled he had already served enough time since he was detained in October 2016.

Speaking outside the courtroom ahead of the verdict, Brunson said: “I am and innocent man. I love Jesus. I love Turkey.” 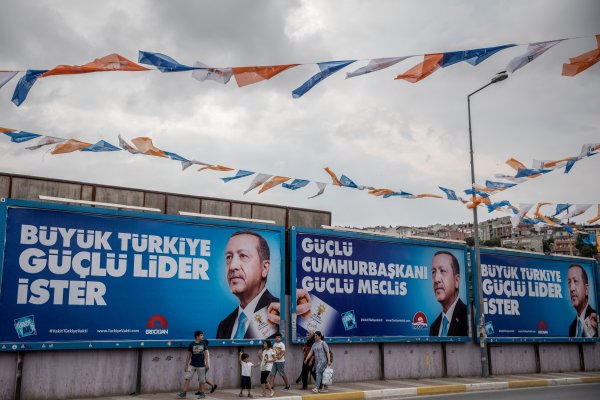 Why Turkey Is Heading for Economic Meltdown
Next Up: Editor's Pick