When TIME sat down with Imran Khan last October, the cricketer-turned politician was adamant that he would only seek power through fair means. After all, he said, he’d turned down many offers in the past. In 1988, Military dictator General Zia-ul-Haq offered Khan a cabinet role. As did fellow strongman General Pervez Musharif in the 2000s.

“To get into power there are much easier ways [than winning an election],” Khan told TIME on the balcony of his home in Islamabad, as the Maghrib call to prayer fought through the roar of cicadas and snarl of feral dogs. “But I came into politics specifically because corruption destroys a country.”

It is thus unfortunate that Khan’s July 25 election as Pakistan’s likely next prime minister has been marred by allegations of exactly that, with Pakistan’s powerful military — which has ruled the nuclear-armed South Asian nation for more than half its history — accused of playing nefarious kingmaker. Khan claimed victory Thursday with his PTI party projected to win between 105 and 120 of the 272 contested seats, putting him in a clear lead though likely needing a coalition to reach an outright majority of 137.

In a televised address, Khan, 65, hailed the “cleanest election” in the 208 million-strong nation’s history. However, six other parties running all rejected the result long before the count had finished, citing “serious irregularities” such as the ejection of their observers. Some in the media have decried a “silent coup” by the generals, while one noted activist called it Pakistan’s “dirtiest election.”

That’s quite a statement. If politics anywhere is a dirty game, it’s a putrid sewer in Pakistan. Assassinations are common, including former Prime Minister Benazir Bhutto in 2007, and, more recently, senior figures of Khan’s PTI. Wednesday’s vote was marred by bombings in the restive city of Quetta that claimed more than 30 lives. As many as 800,000 police and soldiers were deployed across 85,000 polling stations to oversee what promised to be only the second civilian-to-civilian handover of power in the nation’s history.

But alleged interference by the military — which backed Khan and loathed the political machine of former Prime Minister Nawaz Sharif, who has been jailed for corruption — threatens to append an asterisk to that claim. Even before polling day, pro-Sharif media and activists had complained of strong-arm tactics by the establishment. “It is sheer rigging,” Shahbaz Sharif, who led the incumbent PML-N party on behalf of his brother, told reporters Thursday. “The way the people’s mandate has been insulted, it is intolerable.”

By any measure it was a divisive ballot. For any chance of victory, Khan needed to divide the support-base of Sharif, whose PML-N held a 13-point lead as early as May. Sharif has been sentenced to 10 years for corruption and banned from politics for life after Panama Papers leaks revealed he’d purchased lavish apartments in London through shell companies. Khan led that charge. But the PML-N remains strong in populous Punjab province owing to an entrenched patronage system and lingering feudal networks.

Supporters of Shahbaz Sharif, the younger brother of former Pakistani Prime Minister Nawaz Sharif and head of the Pakistan Muslim League-Nawaz (PML-N), at a campaign meeting ahead of the election in Rawalpindi on July 23, 2018.
Aamir Qureshi—AFP/Getty Images

Khan sought to peel off Sharif supporters by courting the Islamist right, painting the U.S.- and India-friendly mogul as inadequately pious or patriotic. This also set the groundwork for a possible parliamentary coalition with radical fringe parties to form a government (though in the end the Islamic right made little headway on polling day.) Sharif went on the counter-offensive, accusing the military of abetting the 2008 Mumbai terrorist attack that claimed 166 lives. In an interview with Pakistani newspaper Dawn, he decried the nation’s “parallel governments.”

That isn’t news to Washington. Pakistan is a lynchpin in the 16-year-old war in Afghanistan as a key supply route and intelligence partner in the strategic nexus between Afghanistan, Iran, India, China and the Arabian Sea. But Pakistan’s fearsome intelligence services have long been suspected of protecting radical clerics who serve its strategic goals. And not just any radicals: 9/11 architect Osama bin Laden was killed in 2011 at his compound less half a mile from the elite Kakul Military Academy in Abbottabad, considered Pakistan’s West Point, where he had spent nearly six years. “We think that there had to be some sort of support network for bin Laden inside of Pakistan,” then U.S. President Barack Obama told CBS News shortly afterward.

Bilateral relations have grown more fractious since the election of U.S. President Donald Trump, who has withheld $2 billion in security aid to Pakistan, decrying the $33 billion in aid that, he tweeted in January, had been “foolishly” provided in the past in exchange for “nothing but lies & deceit.”

Meanwhile, Pakistan’s ties with rival superpower China have strengthened. The new $62 billion China-Pakistan Economic Corridor includes ports, pipelines, railway and power plants snaking through the country. Khan has been courted by China before; prior to the 2013 election, during which he polled in third place, he received a rare invitation to Beijing despite having no government position. “We want to learn from China how they brought 700 million people out of poverty,” Khan said in his victory speech.

For Khan, Islamabad’s role in the U.S.-led war in Afghanistan has been an unmitigated disaster that has cost 70,000 Pakistani lives, enfeebled the domestic security situation and cost its struggling economy more than $100 billion. He has repeatedly advocated greater trade with Afghanistan, an end to a “one-sided” relationship with the U.S. and negotiations with the Taliban.

“I find it bizarre that anyone would just rely on a one-dimensional military strategy,” he told TIME. “The military should only be part of a political strategy.”

Khan’s own politics have hardened as his still handsome countenance has lined and leathered. His halcyon pomp may have been spent charming supermodels under the paparazzi glare of London’s sybaritic nightspots, but his recent campaign included an “electoral alliance” with radical Islamist Maulana Sami ul Haq, dubbed the “Father of the Taliban.” In January, a top PTI official shared a campaign rally stage with U.S.-sanctioned terrorist Abdul Rehman Makki, according to local media. In November, Khan backed anti-blasphemy riots that erupted across Pakistan in response to a draft new oath for lawmakers that omitted any mention of the Prophet Muhammad. Just this month, he launched a vociferous defense of Pakistan’s draconian blasphemy law.

Most galling has been his steadfast defense of the Pakistani Taliban, whose 2014 massacre at a school in the city of Peshawar — killing 149, including 132 schoolchildren — was a red line even for hardened Islamists. His detractors have propagated the snide nickname, “Taliban Khan.”

“Any party that uses violence should not be allowed,” Khan told TIME carefully. “But if you make an extreme party run it’s not a bad thing because you always move them into the center and towards moderation. It’s much better to assimilate people, integrate them, contest elections, bring them into the mainstream.”

But Khan’s attempts to “moderate” radicals are akin to playing with fire in the world’s ultimate radical tinderbox. In Khan’s eyes, only 5% of Taliban are true extremists, with the overwhelming majority simply reacting to American drone attacks, air strikes, night raids and other collateral damage. Others are just opportunist thugs who exploited the lawlessness of the borderlands to make a quick buck.

It’s a view that garners support. “In my village, the people who had nothing to do became Taliban,” Aamir Rassool, 28, a call center worker from Orakzai Agency in the Federally Administered Tribal Areas, or FATA, by the Afghan border, told TIME late last year. “Seriously, they just grew their hair and beard and went to wealthy homes and demanded money. They were not Taliban, they were gangsters.”

Still, engagement with the group’s leadership legitimizes its message: one of stone age misogyny, ignorance and brutal oppression. And Khan’s contention that terrorist activity in Pakistan has decreased as American operations have wound down is specious. In fact, it’s only since a full Pakistani military offensive into previously Taliban-controlled FATA in mid-2014 that the security situation has truly improved. “And the offensive went against what Imran Khan for many years was calling for, which was peace talks and not the use of force,” says Michael Kugelman, the senior associate for South Asia at the Woodrow Wilson Center.

Khan is an unlikely radical apologist. The only boy of five children, he was born Oct. 5, 1952, to an affluent Pashtun family in the former colonial capital of Lahore. After school he studied Politics, Philosophy and Economics at Oxford University, and it was also in the U.K. that he first played cricket for Pakistan, aged 18. He retains superstar status for turning his nation into an international cricketing force, crowned by leading an unfancied team to its only Cricket World Cup victory in 1992.

“Sports teaches you to struggle, above everything, and you learn how to take the knocks,” says Khan. “When you win your feet stay on the ground, but when you lose you don’t get demoralized. You pick yourself up again.”

Khan retired from cricket soon after that triumph. In 1994, he opened the Shaukat Khanum Cancer Hospital in Lahore in memory of his mother, who succumbed to the disease. It remains the largest cancer hospital serving Pakistan’s impoverished. Its quality of care and ruddy finances silenced doubters who scoffed such an ambitious project wasn’t feasible, boosting Khan’s administrative credentials. He founded his PTI political party two years later, though found detractors quick to take aim at his private life.

Khan’s first wife was British journalist and society heiress Jemima Khan, née Goldsmith, a close friend of Diana, Princess of Wales. She converted to Islam for their wedding, though the pair divorced in 2004 after nine years of marriage, and her family’s Jewish heritage was political dynamite in the world’s largest Islamic state. (The couple’s two sons live in London with their mother.) Khan’s second marriage to British-Pakistani journalist Reham Khan lasted only months in 2015. In February, he married Bushra Maneka, who acted as his “spiritual guide.”

Now Khan guides the nation. He will be keen to turn focus away from allegations of rigging toward fixing governance problems. Some 29.5% of Pakistanis wallow below the poverty line, according to its Ministry of Planning Development and Reforms, with literacy rates at just 58%. Pakistan’s current account gap has soared by almost 50% to $16 billion, while its trade deficit has reached $3.7 billion. The country’s external debt and liabilities stand at a six-year high of 31% of GDP. Khan’s first job will be to ask the IMF for another bailout — less than two years since its last one of $6.6 billion.

How will he take to government? Khan is no stranger to transformation: he’s the debonair playboy who grew devout; the humanist who stands with the bloodthirsty; the anti-graft campaigner who will now lead under a cloud. “Pakistan’s policies won’t be for the few rich people, it will be for the poor, for our women, for our minorities, whose rights are not respected,” Khan told the nation Thursday.

But with legal objections to his win looming, and unrest on the streets all too possible, Khan might be facing the toughest transformation of them all. 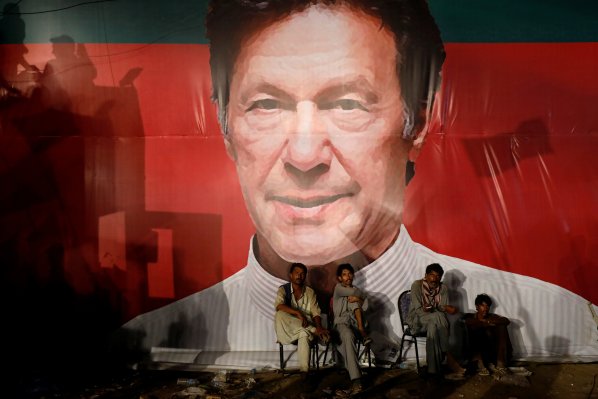 Pakistan Goes to the Polls
Next Up: Editor's Pick