A Swedish student who refused to take her seat on an airplane and temporarily stopped the deportation of a man to Afghanistan has spoken out about the incident, after millions of people watched her live-streamed protest on Facebook.

“It was really emotional but I had a mission and I was just making sure I was fulfilling that,” Elin Errson, a 21-year-old university student, told The Guardian in an interview. Ersson is an activist who volunteers with refugee groups in Sweden; she has criticized her country’s approach to deportation, which she said is too often implemented – especially for refugees from countries like Afghanistan.

“As I’ve been working and meeting people from Afghanistan and heard their stories, I’ve been more and more in the belief that no one should be deported to Afghanistan because it’s not a safe place,” she told The Guardian. “The way that we are treating refugees right now, I think that we can do better, especially in a rich country like Sweden.”

Ersson boarded the Istanbul-bound flight in Goethenburg on Monday with knowledge that a man onboard was being deported to Afghanistan via Turkey. The man in question, she learned, was not on that flight, but another person being deported was.

“I am doing what I can to save a person’s life,” she told a flight attendant. “As long as a person is standing up the pilot cannot take off. All I want to do is stop the deportation and then I will comply with the rules here. This is all perfectly legal and I have not committed a crime.” The deportee was then escorted from the plane.

“I took up my phone and started filming in case something happened to me, and I wanted to make sure that other people knew what was going on,” Ersson told The Guardian. “First [the other passengers] got annoyed because the flight attendants were talking to me and I wasn’t listening, but when they [realized] what I was doing then most of them thought it was good.”

The footage of the incident has been viewed nearly 4 million times which Ersson says is heartening. “I hope that people start questioning how their country treats refugees. We need to start seeing the people whose lives our immigration [policies] are destroying.” 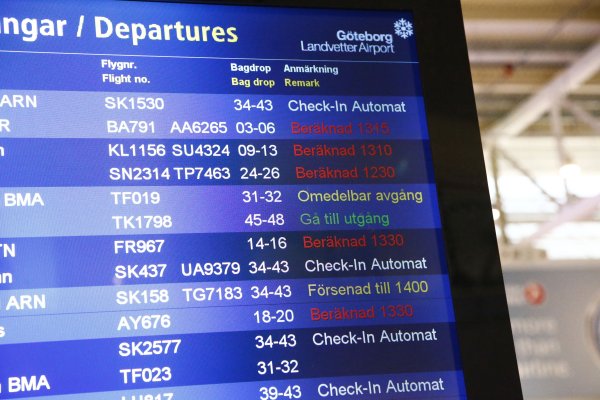 Swedish Woman Temporarily Stops Deportation of Afghan Man by Refusing to Sit Down on Plane
Next Up: Editor's Pick