Doe’s Eat Place, the restaurant founded in 1941 in my hometown of Greenville, Miss., has reached legendary status among foodies the world over for its superlative steaks cooked on a mammoth open broiler, its hot tamales (which bear little resemblance to the Mexican tamale) and its atmosphere. Doe’s was founded by second-generation southern Italian immigrant Dominick Signa and is now run by his sons and grandsons.

Doe’s is indeed a classic, but one could make the case that it is also a microcosm, or at least an instructive emblem, of the town itself. Greenville was founded in 1824 and is situated smack in the middle of the 7,000-sq.-mi. alluvial floodplain known as the Mississippi Delta. Like the rest of the Delta, it was literally hacked out of a dense, uninhabitable hardwood forest by planters who had made their fortunes elsewhere and were eager to get at some of the richest soil in the world. Those early settlers were joined by a surprisingly cosmopolitan mix of folks. When Greenville was incorporated, just after the Civil War, the first elected mayor was Jewish, as were the owners of the first businesses and the founder of the first school. Since 1900, the majority of the citizenry has been African American, but there are sizable Syrian and Lebanese populations as well as large numbers of Chinese (who built the railroads and levees and stuck around to open grocery stores) and southern Italians (who were brought over as indentured servants to pick cotton during one of our many shameful periods).

So it was that “Big Doe” Signa (who had tried his hand at bootlegging) sold his still for $300 and a Ford Model T and turned his family’s grocery store into a honky-tonk and takeout joint offering up spaghetti, chili and the hot tamales. Located on Nelson Street, the city’s unofficial African-American Main Street, it was part of a bustling scene that included late-night barbershops, sidewalk craps games, more than a dozen Chinese groceries and so many blues clubs that it has been compared to Memphis’ Beale Street.

In an arrangement that turned segregation on its head, the African-American customers came through the front door, while the occasional white customer entered through a side door into a back room. Within a few years, the back room, or “eat place,” became so popular that Big Doe shut the tonk and developed a “menu.” While there has never been a written version, regulars know that it consists of the original chili, tamales and spaghetti, along with fried and broiled shrimp, hand-cut french-fried potatoes, salad and garlic bread, in addition to the steaks.

During Mississippi’s civil rights upheavals, Greenville served as something of a safe harbor. (Senator LeRoy Percy had united locals against the Klan as early as 1922.) Not long afterward, when my father Clarke Reed served as chair of the fledgling Mississippi Republican Party, he and his close friend Hodding Carter III, editor of the Pulitzer Prize–winning Delta Democrat Times, used Doe’s as a base from which to entertain national reporters in town to cover the rise of the state’s nascent two-party system. Stories in the New York Times and the Washington Post soon followed, but the restaurant remained unchanged. Customers who wanted booze continued to brown-bag it–the state was officially dry until 1967.

Big Doe retired in 1974 (he died in 1987), and these days the steaks are mostly cooked by his grandsons Charles Jr. and Doe III, who stand on the same worn, grease-stained floorboards in front of the same red-hot broiler. Their 92-year-old great-aunt Florence still occasionally turns up to make the salad, and the hot-tamale formula remains the same. Such is its importance to the restaurant’s DNA that when Doe Jr. married his wife “Shug” (short for Sugar), his father warned him never to reveal the recipe to her lest she leave him for someone else.

He needn’t have worried. More than 40 years later, when the family gathered onstage in New York City to accept a James Beard Foundation honor, Shug took the mic and tried to explain to the crowd what Doe’s is: “People come together, never meet a stranger–it’s the American way.” 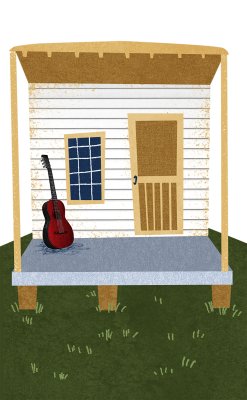 Memories From the South: In Elvis We Trust
Next Up: Editor's Pick