The Bloody Brilliance of Megan Abbott

Three of Abbott’s novels have been optioned for television; her first, Dare Me, will begin filming in August
Philippe Matsas—Agence Opale/Alamy
By Eliana Dockterman

Megan Abbott isn’t afraid of a little blood. Her new thriller, Give Me Your Hand, is soaked in it. The women wear red stockings and “placenta red” lipstick. Mostly, Abbott writes about period blood, a topic that would strike fear in the hearts of most crime writers.

But Abbott isn’t just any crime writer. She earned a Ph.D. from New York University studying noir literature and has built a blockbuster career subverting the genre’s tropes. Her murderers aren’t femme fatales; instead they’re young athletes, ruthless gangsters and, in this book, hypercompetitive scientists. Her victims are always men. It’s nothing personal, she explains over cold-brewed coffee at a bakery nestled between Tudor houses in her neighborhood of Forest Hills, Queens. “It wasn’t conscious,” she says. “But I never wanted to do the clichéd beautiful, mysterious female victim.” In Give Me Your Hand, the protagonist, Kit, dismisses Ophelia–the archetypal female body that washes ashore to plague the conscience of a lover–as fragile and weak.

Kit is desperate to join a team of elite researchers but finds herself competing with the one other woman in her lab, a childhood friend with whom she shares a dark secret. They both want to study premenstrual dysphoric disorder (PMDD), a debilitating version of PMS with symptoms that include extreme mood swings.

Like many afflictions that affect only women, scientists have done little research on PMDD. Researchers estimate that it affects up to 8% of all women, yet some doctors don’t believe women when they complain of its symptoms. Abbott read at least one case when PMDD was used as a criminal defense. “It said so much about the history of women’s medicine,” she says, “dismissing everything as hysteria, perceiving women’s bodies as this out-of-control thing.”

Abbott couldn’t resist the idea of a condition that could be both an explanation for bad behavior and an excuse that ignores the complexity of female killers. She masterfully mines that gray area to build tension. At one point, a character wonders, “Don’t we all feel we have something banked down deep inside just waiting for its moment, the slow gathering of hot blood?”

As Abbott was writing, women’s blood emerged as a real-life motif. “During the election, the idea of the female body being monstrous kept coming up,” she says. “Trump made the comment about blood coming out of Megyn Kelly, and another about Clinton using the bathroom. Blood can be a metaphor for anything, but at this moment it felt like a metaphor for demonizing women.”

Abbott spends her days reading about gruesome murders, plucking ideas for her novels. (This book was partly inspired by a murder at a Yale lab where the victim’s body was found in a wall.) So one might expect her to be brooding. But in person, she’s bubbly, enthusing over her favorite true-crime podcast (In the Dark) and obsessing over women with “big personalities” (lately, Sheela from Netflix’s Wild Wild Country). She guards herself by refusing to write about serial killers or people who hurt children. She can’t spend a year living with those people.

Abbott has written nine novels and become a mainstay on best-seller lists. Three of her books, including Give Me Your Hand, are being turned into TV series. She has some experience in television as a writer on HBO’s porn-industry drama The Deuce. We meet between her calls with producers of the adaptation of her 2012 novel Dare Me about which cheerleading-uniform color would look best with a splash of blood: Blue? Pink?

Abbott’s last four books were set in high school. For teenagers, especially girls, every breakup or bad grade can feel life-or-death. Give Me Your Hand acts as a spiritual sequel: What happens to girls who experience real trauma once they grow up?

Abbott’s talent lies in dissecting the complicated tension between women at any age. As Kit’s misogynist male colleagues remind her, she’s competing with another woman for a job, a contest not all that different from landing the top spot on the cheerleading squad. Abbott excavates the wariness women can feel toward one another to create internal psychological drama. Plenty of blood is spilled in Abbott’s book. But the paranoia of whether to trust a frenemy proves even more compelling. 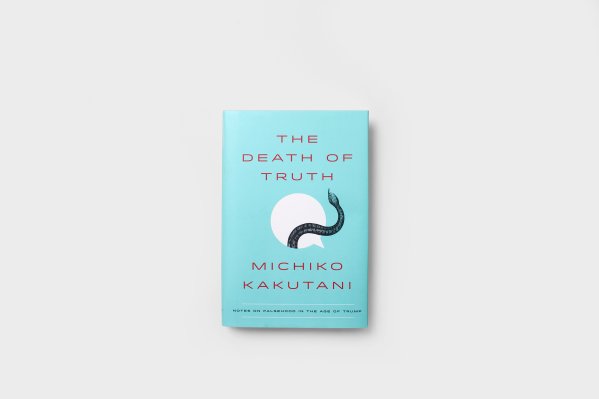 Michiko Kakutani Is Fighting for Truth in a Post-Truth Era
Next Up: Editor's Pick